BMW’S ENGINEERS FACED a dilemma with the 2 Series Gran Coupé, aiming to create a car with an acceptable amount of room for passengers and a spacious boot, without sacrificing handling. Engineers chose to start with a disadvantage in dynamism rather than one in roominess. Front-wheel drive it is, then.

The Gran Coupé uses the same FAAR platform as the new 1 Series, giving 34mm more knee room in the back seats compared with the old rear-drive 2 Series, along with a 450-litre boot. That’s a welcome increase, but the idea of a front-driven BMW sports saloon is still contentious; pugnacious loyalists may argue that Munich has taken leave of its senses. The firm doesn’t think the 2’s target audience (“young professionals”, in marketing speak) will mind.

BMW also believes few will notice the switch because of the systems on the new car, including the ARB traction control shared with the 1 Series, and first used on the i3s. It puts the engine’s ECU in charge of keeping the car pointed in the right direction by comparing data sent by the stability control system with the crankshaft’s rotation speed. BMW also made the 2’s body stiffer by adding extra bracing in the engine bay and boomerang struts linking the rear sub-frame to the body. 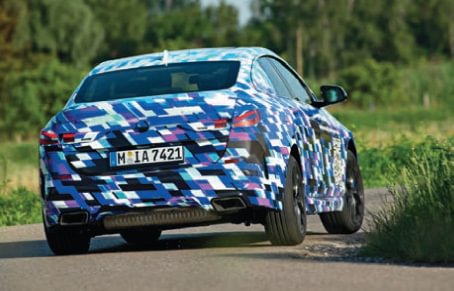 Hardware and software together make the 302bhp M235i sharp, balanced and enjoyably predictable to drive. The xDrive all-wheel-drive system does an excellent job of using both axles to juggle power as needed to provide maximum traction, shuffling up to 50% of the turbo four’s output to the rear wheels.

The Gran Coupé is a little front-heavy – it feels pulled rather than pushed – but a jaunt on twisty roads reveals BMW’s chassis wizardry largely keeps understeer at bay. The steering, still being developed, is direct and well-weighted.

The 2.0-litre engine shows its teeth when you touch the throttle. It’s quick in a straight line, taking around five seconds to do 0-60mph, and builds speed smoothly. The M235i reaches and holds autobahn speeds with the confidence you’d expect from a BMW, while flicking the drive mode selector into Comfort turns it into a docile cruiser.

The 228i xDrive carries itself like its more powerful sibling on twisty roads but reaches the limits of grip and performance sooner. As a trade-off, its less aggressive suspension means a more comfortable ride in everyday driving conditions.

Our brief drive suggests BMW has made the car usable and comfortable without muting its performance genes. It doesn’t feel as lively as a 2 Series coupé – but it still behaves like a proper sports saloon. ■