The first thing you need to know about the Isle of Harris, located 40 miles off the northwest coast of the Scottish mainland, is that it isn’t actually an island. A glance at a map of the Outer Hebrides reveals that Harris is part of the same landmass as Lewis; together they form the third largest in the British Isles overall – after the mainland and Ireland).

Named from the Old Norse, Na Hearadh, or “High Land”, Harris looks and feels like an ancient island, however, and boasts some of Scotland’s most remote, rugged and beautiful terrain. The ‘island’ is divided into north and south, the two conjoined by the thinnest of geological membranes, a narrow isthmus, at the tiny port of Tarbert. North Harris amounts to 72,900 acres of croft land and open hill ground. Barely half a dozen public roads infiltrate a largely treeless terrain, sparsely populated with around 700 inhabitants.

Despite being the terminal for ferries headed to and from Skye, Tarbert has a defiantly local-oriented feel. Tourists are still not yet the main event and galvanised buckets and sheep dip are as readily available as postcards and a slice of cake. It’s a gentle reminder that the Outer Hebrides retain local communities that have yet to prostrate themselves in front of the tourist shilling. 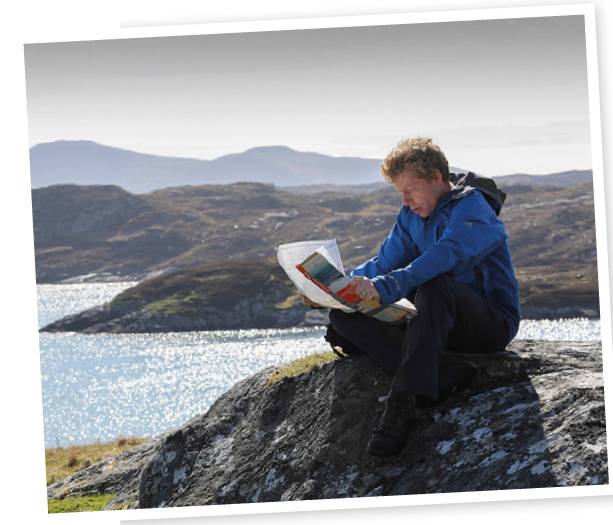 Things are changing though. The first distillery opened in 2016: the Isle of Harris Distillery, right by Tarbert’s pier. While everyone waits patiently for the first malt to make an appearance – 2020 is pencilled in – the distillery has developed a successful line in gin production, using local sugar kelp. A microbrewery too, the Loomshed, is set to open this autumn, offering both an IPA and a lager. 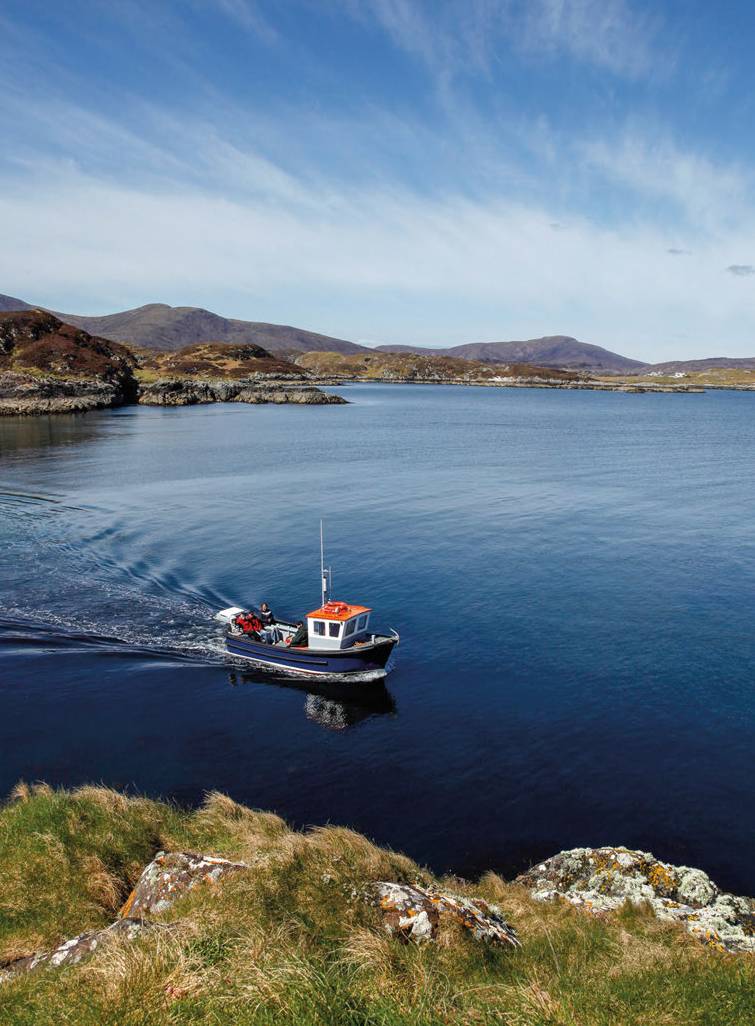 A wildlife cruise around Harris

Before heading onto South Harris, a walk east of Tarbert is definitely worth undertaking. Arrange locally for the W11 bus to take you into the Harris Hills and drop you in the tiny township of Rhenigidale. From here you can follow the Postman’s Trail back to Tarbert, a distance of seven miles. The route is well waymarked all the way and should take you around three hours.

You first contour around the delectable shoreline of Loch Trolamaraig. The undulating trail is lovely, passing waterfalls, crossing burns by Lilliputian footbridges and negotiating the mournful remains of the abandoned 19th-century village of Gearraidh Lotaigear. Then comes a daunting climb up the notorious “zigzags”: 12 thrilling hairpin turns that rise from sea level to a height of almost 1,000 feet.

While you climb, spare a thought for the postmen (and possibly women) who lugged their packages this way; Rhenigidale was only connected to the outside world by road in 1989. Amid rocky, boggy moorland the track levels off at the col – the low point of the ridge between two peaks. Both golden and white-tailed eagles nest around here. The descent is straightforward and towards the end you’ll pass a curious plaque that reads “Duncan Macinnes 1827–1908, Duncan Macinnes 1908–1982” – the name is that of a postman and his son who covered this route. From here, it’s a further two miles along the road to Tarbert, via the minuscule hamlet of Urgha.

Beginning some eight miles southwest of Tarbert, the sands of Luskentyre herald an array of stunning beaches and headlands. Among the finest is Seilebost, where the dunes push out into the Sound of Taransay, creating a beach within a beach. The dunes here can reach 50 feet in height and change their formation with every winter storm.

Three miles further south the shell beach of Scarista extends for three miles at low tide. Sea currents here change continually, creating a stunning effect with marooned outposts of sand surrounded by water. Like Seilebost, the dunes wobble out at right angles towards the sea, the grasses on their ridges creating the appearance of a giant caterpillar. From the ground up, the colour scheme, taking in the North Harris Hills to the north and the Atlantic Ocean, is cinematic: strips of greens, yellows, blues and the more metallic shades of those brooding hills.

In summer, this wild Atlantic coast montage is augmented by the emergence of flowers on the machair (or sea meadows). For much of the year these long strips of coastal grasslands are as smooth as a snooker table but transform into an astonishing riot of wild flowers in summer, A small patch of machair may contain 45 species of wild flowers including bright red and white clover, buttercup, yellow iris, harebell, daisies, thyme and orchids such as frog and northern marsh orchid. 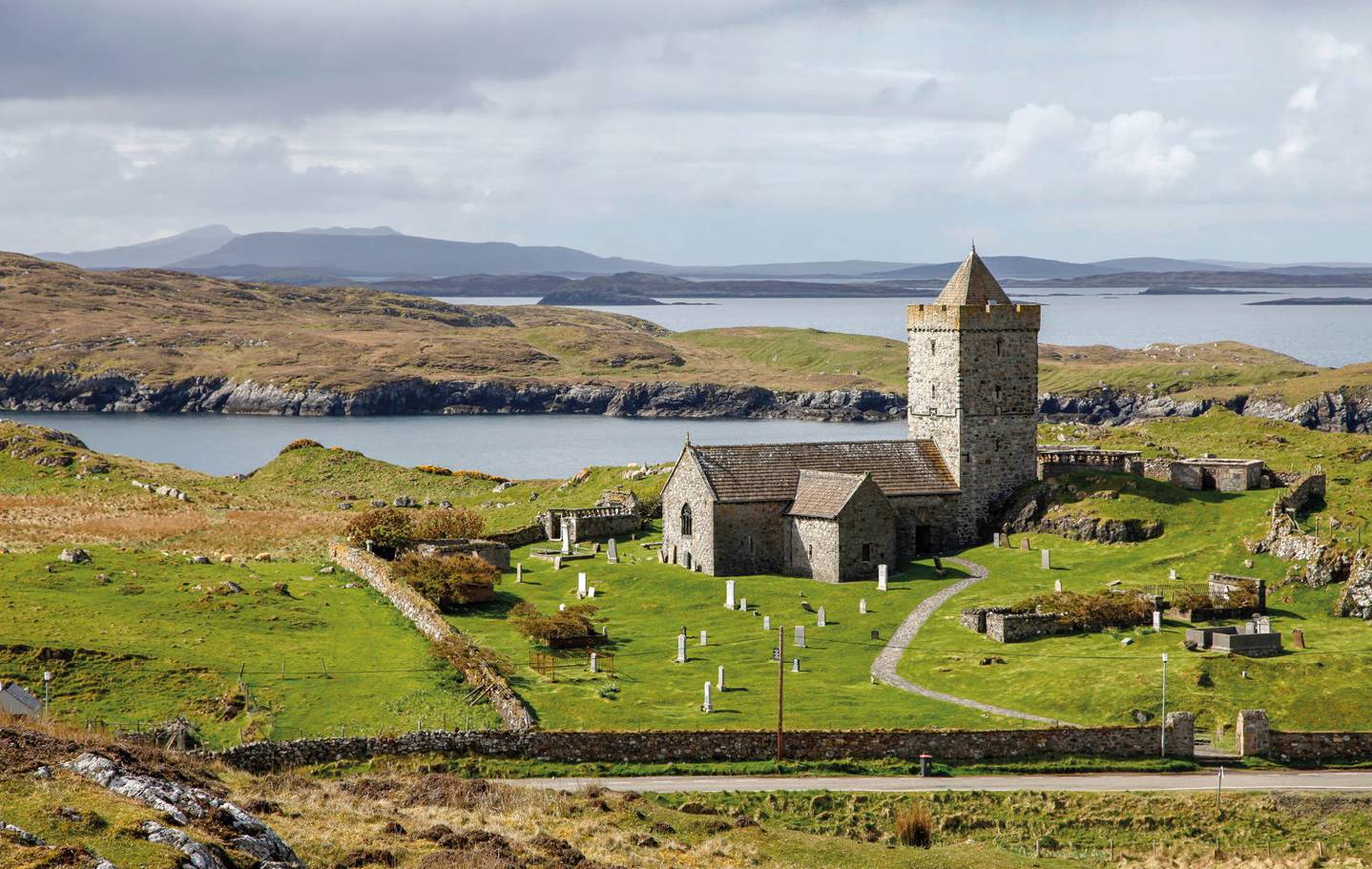 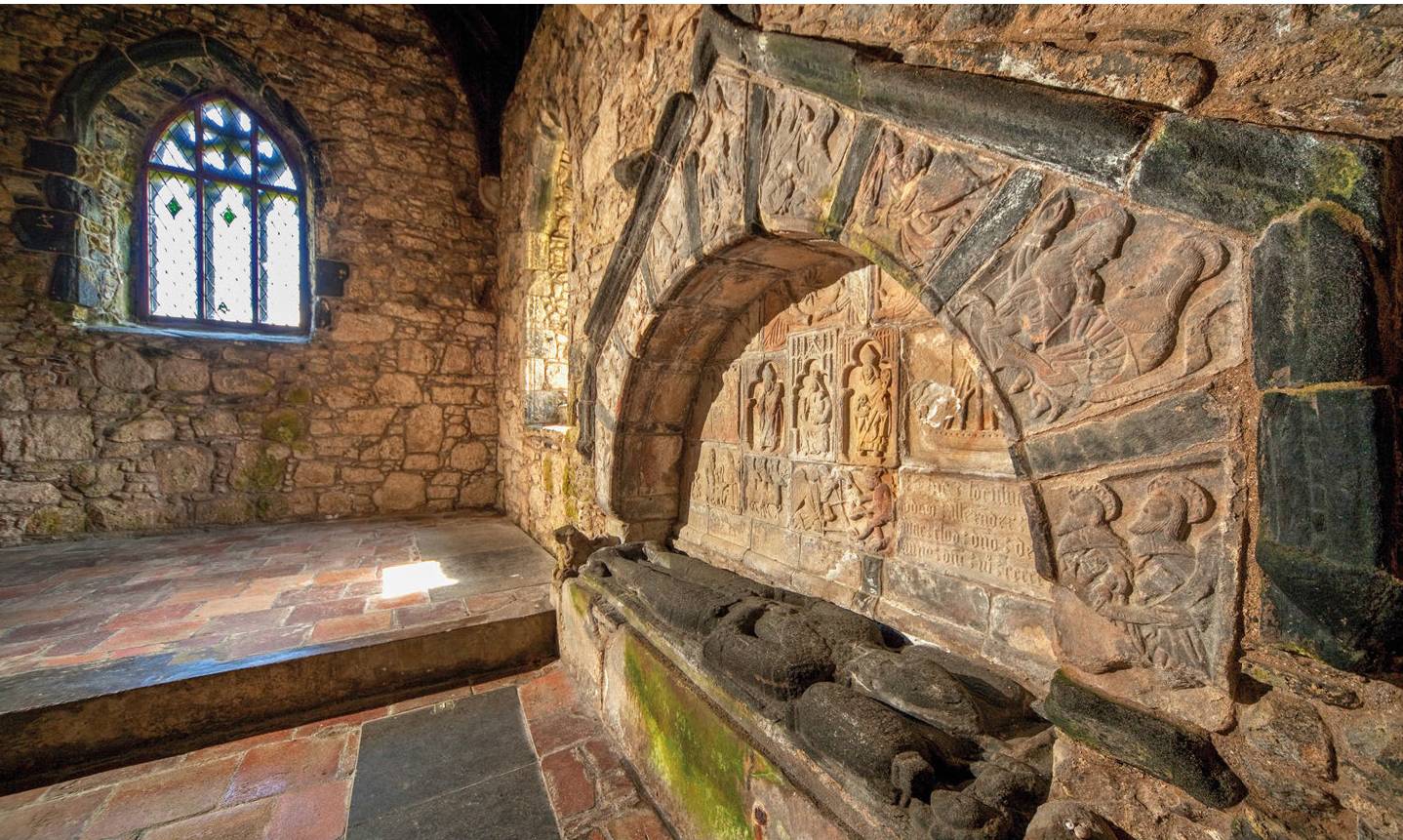 The church’s tomb of Alexander MacLeod

If you are able to turn away from the shape-shifting rivulets and sands, you will notice that the architecture of self-catering properties can be almost as eye-catching. This includes Blue Reef Cottages, which blend into the hillside and are intended to mirror the design of Neolithic properties; the Broch and the Rock, which follow a similar ethos and are semi-subterranean; Fir Chlis, which is best described as “Hebrinavian”, combining a Hebridean design with Scandinavian sleek lines; and the equally modern Sound of Harris, with floor-to-ceiling views of the sea and a Japanese soak tub to ease the muscles after a day’s sight-seeing and walking. Tongue-in-cheek locals now refer to the west coast as the “Harris Riviera”. In the desultory port of Leverburgh you can drop into Borrisdale Tweed, where Carol Graham, one of a new generation of creative Harris Tweed weavers, produces caps, brightly-coloured cushions and satchels. 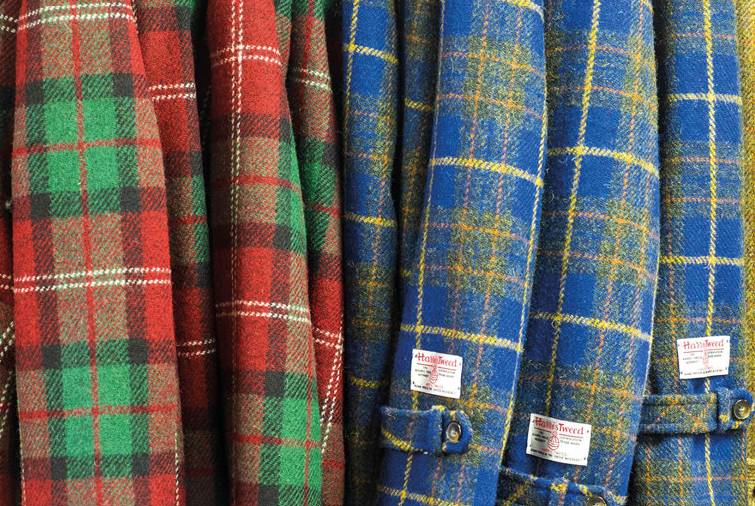 Harris tapers to a rocky conclusion at the settlement of Rodel. Up until the mid-19th century Rodel was a religious centre, a thriving crofting and fishing community. The harbour looks across to Skye and is easy on the eye. Above it glowers St Clement’s Church, whose clanking medievalism invites you to nose around its dark interior. Dating to 1520, this is considered the finest pre-Reformation church in the Outer Hebrides, decorated by wall tombs, local and religious scenes in relief and weathered effigies. The Macleods of Harris and Dunvegan are buried here, their tombs simultaneously graceful and austere.

The tower’s exterior includes, unexpectedly in prim Presbyterian Harris, the explicit carving of a semi-naked woman, her skirt lifted to leave little to the imagination. It’s unclear if this Sheela Na Gig, as they are known, was a fertility symbol or a device to distract evil spirits that tried to slip into church on the coattails of pious worshippers. 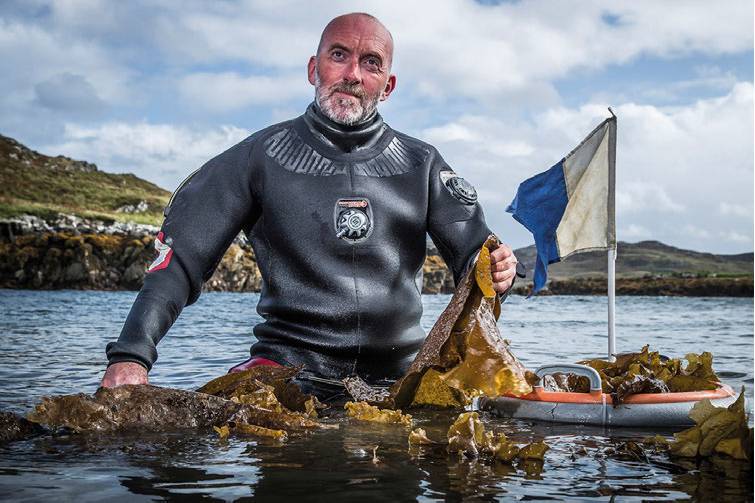 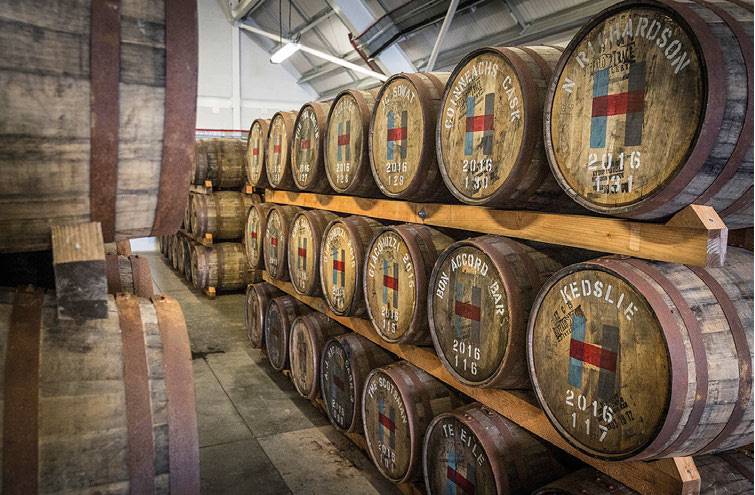 the Isle of Harris Distillery

The church is also the resting place of Mairi Nighean Alisdair Ruaidh, the leader of a small band of 17th-century female poets who performed the role of oral historians of Gaelic culture. The location of her precise burial plot is uncertain, but she is said to have requested being buried face down to keep “her lie-telling mouth to the underside”. 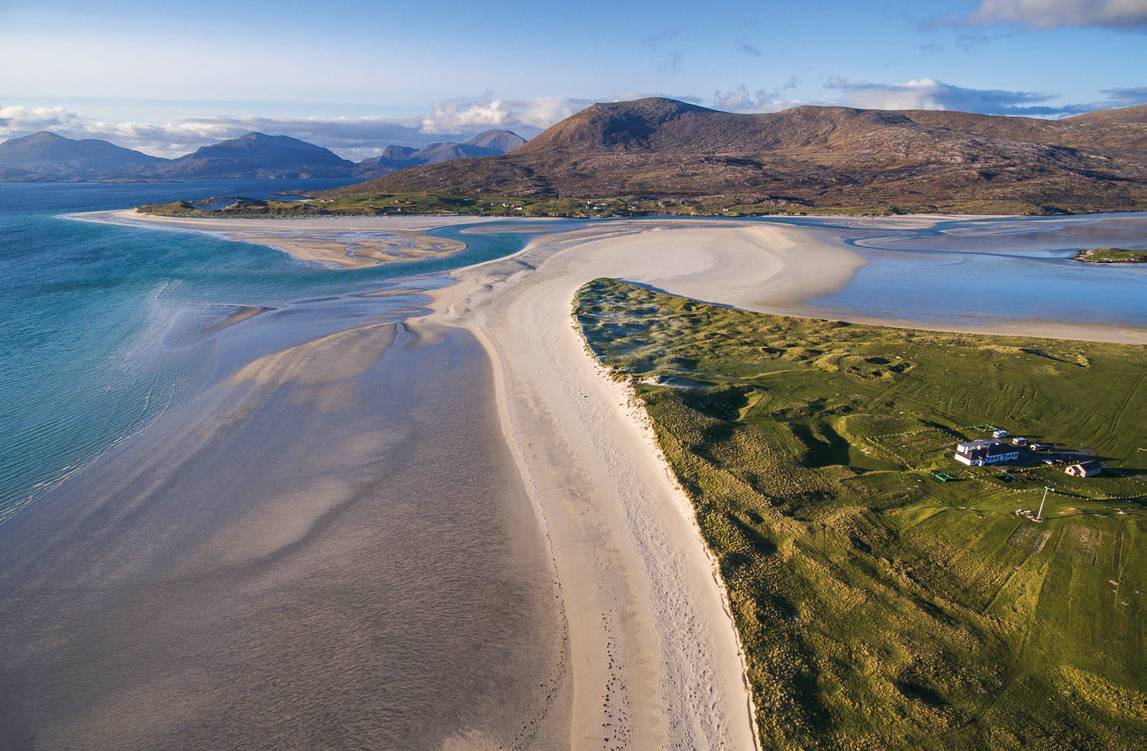 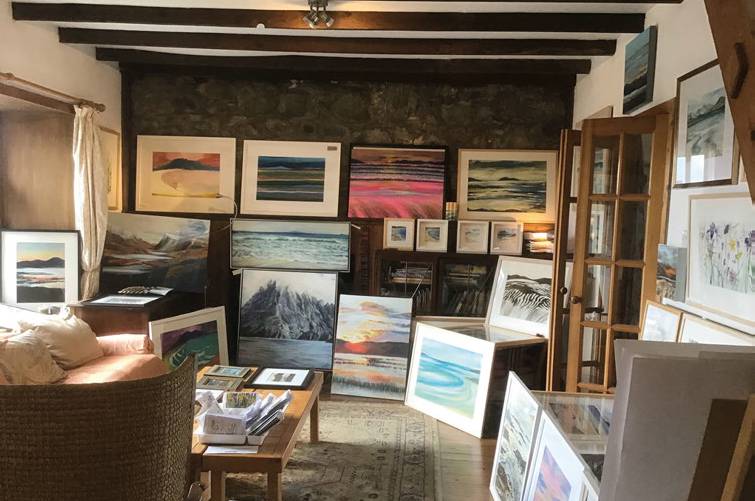 The east coast of South Harris is given over to an area known as The Bays. Here, as you nudge along the single-track road between exposed sheets of Lewisian gneiss scoured by glaciers, boulders burping up through the ground, it’s hard to believe that this moonscape belongs to the same island as the lush west coast.

The Bays are lightly populated but amid the small townships you will find several artists. Among them are Margarita Williams who runs the Holmasaig Gallery at Quidnish, home to a fine collection of watercolour landscapes that capture the ever-shifting light of Harris. The Mission House Studio, meanwhile, showcases the stoneware bowls and more abstract ceramics work of Nickolai Globe and the monochrome photography of Beka Globe.

You can finish a journey around Harris with a magnificent walk from the east coast to the west. This follows the gloomily-named Bealach Eorabhat – the Coffin or Corpse Road – from Àird Mhighe to Seilebost. The unforgiving rock of the Bays was impossible to bury the dead in, so historically they were hefted across the pass to the lusher soils of the west coast. The waymarked route involves a gentle ascent and descent through a valley with the chance of seeing golden eagles that nest in the rocky heights. In an ideal world – and with a co-operative companion to drop you off – you would walk this route at dawn, arriving on the west coast as the pre-sunrise flare floods the vast bay of Luskentyre. At such a time, the sands seem to become conjoined and laced with rivulets of retreating and advancing water and ever-shifting dunes.

Mark is the author of two Scottish guidebooks, Outer Hebrides and Orkney, published by Bradt. www.bradtguides.com ■