BUSINESS UNUSUAL
/ B/The Big Idea
The New Workcation
Entrepreneurs are escaping for days of intense focus, isolation, and brutal feedback from their peers. Then they come back feeling refreshed. Ready to go?
by BLAIRE BRIODY
Illustration/VIKTOR KOEN 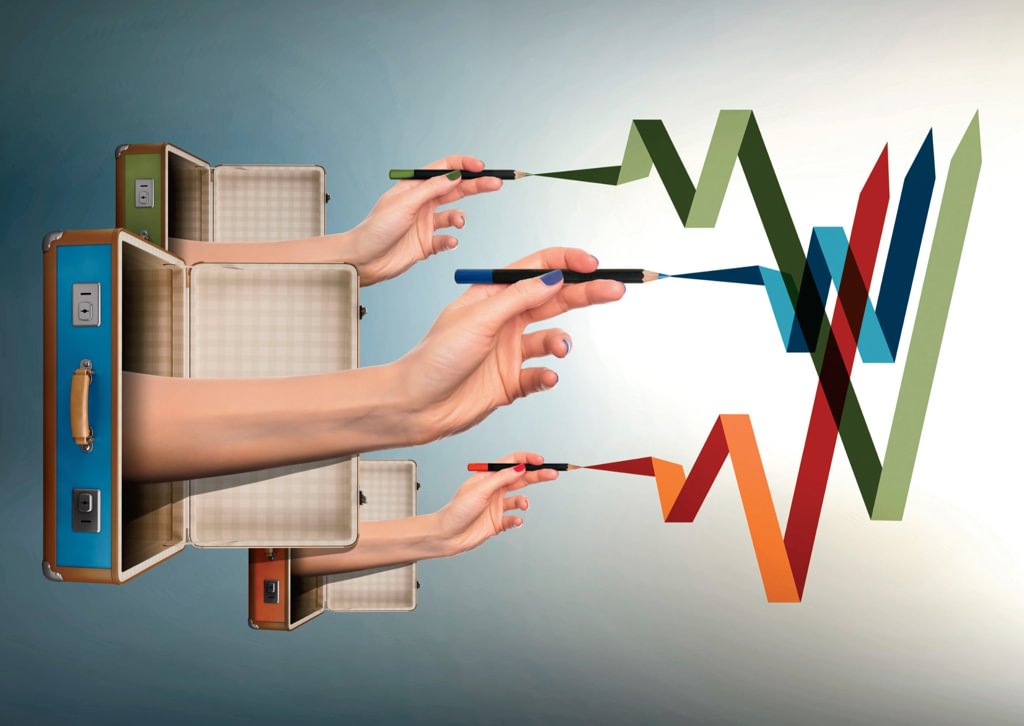 Christina Stembel had a 70-item to-do list and no time to tackle it. So in 2018, she decided to eliminate all distractions. She’d get an Airbnb cabin in Ojai, Calif., with limited cell service, and spend a weekend alone with her work. She mentioned this plan to another founder she met at an Ernst & Young award ceremony, and the woman asked to come along. Stembel reluctantly agreed. Then the woman invited a friend. And with that, Stembel thought her time away would devolve into a social free-for-all.

But as the three founders settled in at their cabin, Stembel discovered an unexpected benefit. All three women ran companies that create tangible goods and generate millions to tens of millions of dollars in revenue: Stembel founded Farmgirl Flowers, which ships ethically sourced bouquets across the Lower 48; she was joined by Ellen Bennett of Hedley & Bennett, maker of premium aprons and chef’s gear, and Chelsea Shukov of Sugar Paper, a high-end stationery business. At the cabin, the women began swapping experiences and insights, and soon they scrapped their original plans for the trip. They wouldn’t tackle their to-do lists. Instead, they’d help one another with challenges in their businesses. “I didn’t come back thinking, Wow; I got so much accomplished,” says Stembel. “I came back feeling, Wow; I’m thinking about things in such a different way.”

The women now affectionately refer to their weekend as a workcation, a term that, historically, has meant little more than clearing emails poolside with a glass of wine, documented on Instagram to boast about your #dedication. But a fresh class of entrepreneurs like them are redefining the term, and their updated concept is catching on. This brand of a workcation is about much more than a change of scenery or luxury packaged as work. It’s a way to focus exclusively on big-picture problems, harness creativity, and walk away with a clear, fresh vision on how to better run your company.

These kinds of escapes have genuine psychological and business value, according to experts who have looked at the trend. For example, a workcation can boost creativity by immersing people “into a different idea landscape of thoughts, emotions, perceptions, and goals,” says Wilma Koutstaal, a psychology professor at the University of Minnesota and coauthor of Innovating Minds: Rethinking Creativity to Inspire Change. “Studies show that people who are more networked innovate more regularly, because they have access to all these different skills and knowledge possibilities.” The small-group effect combined with inspiring scenery and limited distractions, she says, is a powerful combination.

The workcation is also beginning to take many forms—from the intimate to the professionally organized. The organization Project Getaway selects 16 entrepreneurs to participate in a one-month co-working, co-living brainstorming session, usually in Bali. Sunny Office brings founders together for shorter co-stays across Europe, while Nomad Pass offers “startup retreats,” Airbnb-style—from a multibedroom eco beach house near Santa Cruz, Calif., to a luxury jungle treehouse for 16 in Phnom Penh, Cambodia.

Joshua Jordison, founder of a management and consulting firm in Los Angeles, has spun the trend into an annual event. A few years ago, he and a few entrepreneur friends started renting a cabin on California’s Lake Arrowhead to brainstorm. That got him and fellow founder Wesley Chapman wondering why there weren’t more conferences that mirrored this intimate atmosphere, so in 2017, they launched The Human Gathering, an annual invite-only three-day retreat for entrepreneurs that focuses on bonding and collaboration. About 100 people attend each year, and Jordison says it works because they break into smaller groups. Guests often tell him they met their cofounders at his retreats.

THE FOUNDERS BEGAN DIGGING INTO ONE ANOTHER’S BLIND SPOTS, DELIVERING HARD-TO-HEAR CRITICISMS. WHEN THE WOMEN RETURNED TO THEIR OFFICES, THEY TOOK ACTION.

But for most entrepreneurs, a workcation is about combining simple ingredients: an isolated location, fellow founders, and a willingness to think big. “Choose your workcation companions wisely,” advises Melissa Cassera, a brand consultant who recommends the getaways. “These should be people who inspire you, people you respect and admire. People who light up your brain—think, OMG, every time we hang out, I leave with a zillion brilliant ideas! I heart yooou!”

Stembel, Bennett, and Shukov had so much success with their first workcation, they decided to do it once or twice a year. For their second meeting, this February, they came prepared to discuss their three biggest challenges from 2018. “We said, ‘Let’s get everything out on the table tonight over dinner and wine,’” says Stembel. “‘Cry if we need to, get it off our chests. That way we can move forward tomorrow.’”

For Stembel, who founded the flower company, 2018 had been awful—she’d dealt with a lawsuit and spent thousands of hours trying to raise capital with no success. The other two women had also slogged through rough years. Bennett struggled to integrate new hires into her growing company’s culture; Shukov tried opening her own fulfillment warehouse for her stationery company but had to close it due to management issues.

The next morning, the three women woke up ready to come up with solutions. They covered the cabin, including the refrigerator, in oversize white paper. First they focused on Farmgirl Flowers, batting around alternative ways to grow besides courting big investors—like using the company’s profits to open distribution centers. When the other women took their turns, they realized they were spending a lot on marketing without seeing enough return. Stembel offered a solution: She’d maximized Farmgirl Flowers’ social media marketing reach by having her staff handle the whole thing rather than pay a high-priced agency to do it.

Later, they began digging into one another’s blind spots, delivering hard-to-hear criticisms. Stembel learned that her directness could sometimes be seen as off-putting with potential investors and decided to improve her communication style. “It helped that it was honest feedback from someone in similar circumstances who cared for you,” she says.

When the women returned to their offices, they took action. Stembel stopped her capital-raising efforts to focus on steady year-over-year growth, and revamped her onboarding process. At Hedley & Bennett, the culinary gear company, Bennett allocated funds toward more revenue-generating areas; she was inspired by seeing the other two founders’ financial plans. And Shukov, of Sugar Paper, decided to implement one of Stembel’s practices: setting quarterly project goals for each department. “We’re watching the business make huge strides,” Shukov says, “because we’re placing the same importance on completing projects that we do on financial goals.”

And the impact still grows. As other entrepreneurs hear about the three women’s workcation, they’ve been inspired to do their own. Stembel says she now regularly gets invited to them, which she loves. “It’s hard to go up to someone and say, ‘Hey, I heard you do this for your company. Can you show me?’” she says. “But there’s a lot of overlap in our challenges. We can help each other.” ■