Places
Tropical taste
In a garden on the US West Coast, designer Sean Hogan has created a strong framework of tropical plants that offer plenty of scope for absorbing its plantaholic owner’s impulse buys
WORDS NOEL KINGSBURY
PHOTOGRAPHS CLAIRE TAKACS

In the Crevice Garden Sean used vertically positioned stones and a gritty soil to allow for maximum drainage. Rosettes of Nolina nelsonii and Agave ovatifolia are among the architectural plants that form a repeating element in the garden. In the foreground the orange-flowered horned poppy Glaucium flavum f. fulvum adds colour. 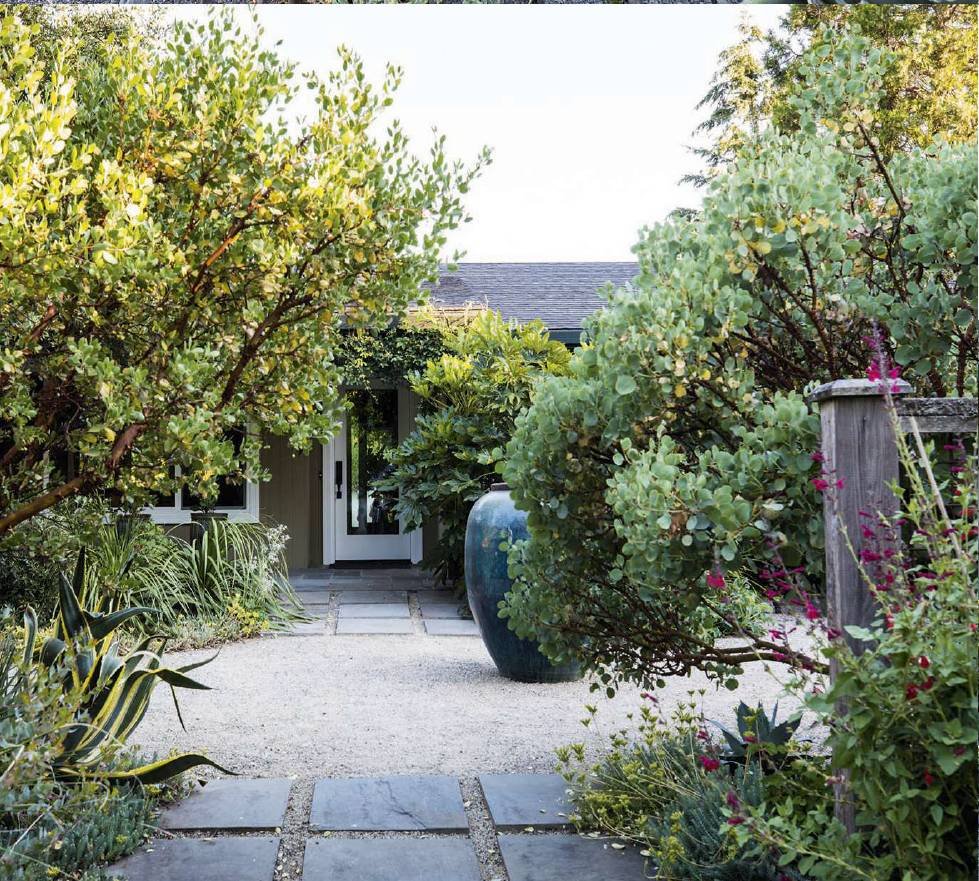 Sean has framed the entrance to the house with two small trees native to this area: Arctostaphylos manzanita on the left and the blue-green A. viscida on the right. Two red salvias – S. ‘Vermillion Bluffs’ and S. darcyi x microphylla ‘Windwalker’ – help to attract hummingbirds.

Marking a change of level in the rear garden, this bed is dominated by the white bark and silver-blue foliage of an Eucalyptus pauciflora subsp. niphophila, while the broad leaves of Phormium tenax ‘Striatum’ stand out to the right. The dark-leaved climber Trachelospermum asiaticum ‘Theta’ helps to soften the top of the retaining wall, and the black mondo grass, Ophiopogon planiscapus ‘Kokuryu’, adds contrast at the base.

In planting along the front of the house the rosette Agave ovatifolia ‘Frosty Blue’ forms a stunning centrepiece. To its left is the South African silver tree Leucadendron argenteum and on its right Chamaerops humilis var. argentea and the Chilean wine palm Jubaea chilensis.

Architectural plants form a repeating element in the garden

Bringing sense, order and coherence to the gardens of those who love to collect plants can be a challenge. But that’s exactly what designer Sean Hogan has been able to do in the garden of plant fanatic John Kuzma in Portland, Do we Oregon want an .in “ brief It’s nice box?? to have a way of organising things, so it doesn’t seem as if our plant obsessions are haphazard,” says Sean, “Our job is to create spaces we want to be in.”

In John’s garden Sean’s answer has been to focus on evergreen woody plants that are largely native to America’s West Coast and that tend to have evergreen grey foliage. Among those he’s used are several Arbutus species as a running theme through the garden, along with a number of blue cypresses.

This blue-grey theme is most strongly developed in the garden at the front of the house, which Sean describes as Mediterranean. Here Sean has used plants that can survive without water in the summer, and in keeping with John’s love of blue and silver foliage has chosen lots of different evergreen oaks, garryas and manzanitas along with some rosettes, such as agaves and beschornerias, as focal points.

At the rear of the house the emphasis is on plants, such as phlomis, grasses, kangeroo paws (Anigozanthos species) and caesalpinias, which look good when backlit by the low evening sun. “The majority of us spend most time in our gardens after work,” says Sean. “That generally means evenings, which is another reason to use what I call ‘afterglow’ colours – silvers, whites and blues.” These colours also work well with the contrasting mahogany bark of Arbutus and Arctostaphylos species, which picks up the accents of the wood in John’s house.

Sean also runs the Portland-based nursery Cistus and John gave him a free hand with the planting. Where John has added plants of his own selection since, he’s been careful to follow Sean’s newly established themes. “I was very happy to build up a collection of local oak species,” says John. “Another plant Sean has used throughout the garden is Rhodocoma capensis, which I love, although it can get damaged by freezing rain.” John also likes plants that flower all summer long, especially those that attract hummingbirds, such as salvias. Luckily, these smaller-growing plants are ones that can easily be fitted in among the larger elements of Sean’s design.

One of John’s particular interests is in collecting Passiflora species, and Sean has been able to incorporate John’s collection into the scheme, by letting them climb up the metal screening he has used to create one of a series of divisions in the garden. Sean has also run a simple steel cable across the top of the garage, along which an evergreen climber, Clematis fasciculiflora, forms a green ledge over the garage, softening the hard lines of the building.

At the rear of the house the emphasis is on plants, such as phlomis, grasses, kangeroo paws and caesalpinias, which look good when backlit by the low evening sun At the rear of the house, the tall palm Trachycarpus wagnerianus and banana plant Musa sikkimensis provide a striking backdrop for a diverse range of plants that includes several cultivars of Anigozanthos flavidus, the yellow and orange flowerheads of which merge with the distinctive pale-yellow flowers of Erythrostemon gilliesii in the centre. Behind this the restio, Rhodocoma capensis, which has become a firm favourite of John’s, stretches its raggedy, dark-green stems towards contrasting blue-green spikes of Yucca schottii in the foreground.

In the rear garden the foliage is markedly bolder, with plants that have stronger textures, including a selection of blue snow gums (Eucalyptus pauciflora subsp. niphophila) with white bark. These have been planted alongside Trachelospermum asiaticum ‘Theta’, a climber that has extremely fine foliage, with silvers and reds running through it, and a slow, dense growth habit. In a nearby bed Sean has planted a Phormium tenax ‘Striatum’ with its bold upright foliage, the black mondo grass Ophiopogon planiscapus ‘Kokuryu’ and plenty of palms.

The relatively hardy palm, Trachycarpus princeps, which has beautiful white leaf undersides, used alongside the closely related Trachycarpus wagnerianus, creates one of the most distinctive statements in the garden and as these palms grow their emphatic forms will be all the stronger. “I am cautious about mixing things that are overtly tropical with plants that are not,” says Sean. “Trachycarpus is like bamboo, I feel it can be used as a knitter. It does lots of things in design terms; it can be grassy, it can have an Asian feel, it can be flexible. Here the Trachycarpus are treated as sculpture.” 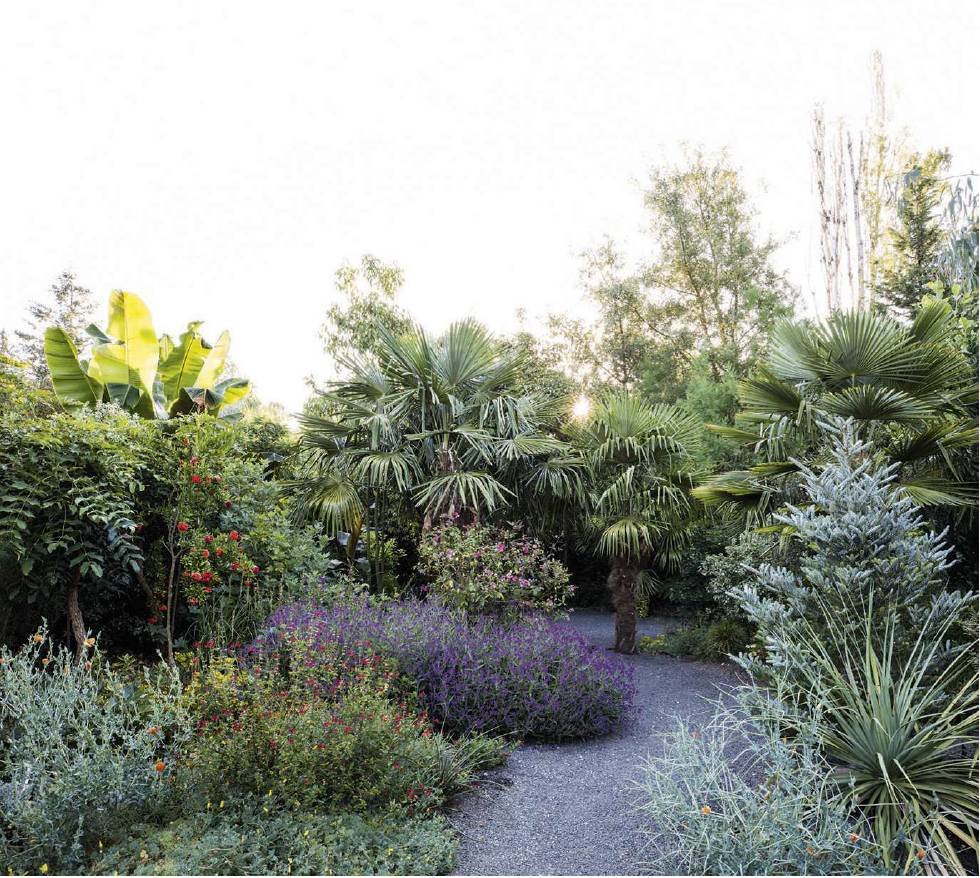 At the front of the house Sean has used a mix of Mediterranean planting, such as the self-seeding Verbena rigida, the pink Rosa x odorata ‘Mutabilis’, Salvia ‘Royal Bumble’ and the orange-flowered pomegranate Punica granatum, which are tolerant of dry conditions. The silver-blue conifer Abies koreana ‘Silberlocke’ and palm Trachycarpus wagnerianus add some tropical structure. 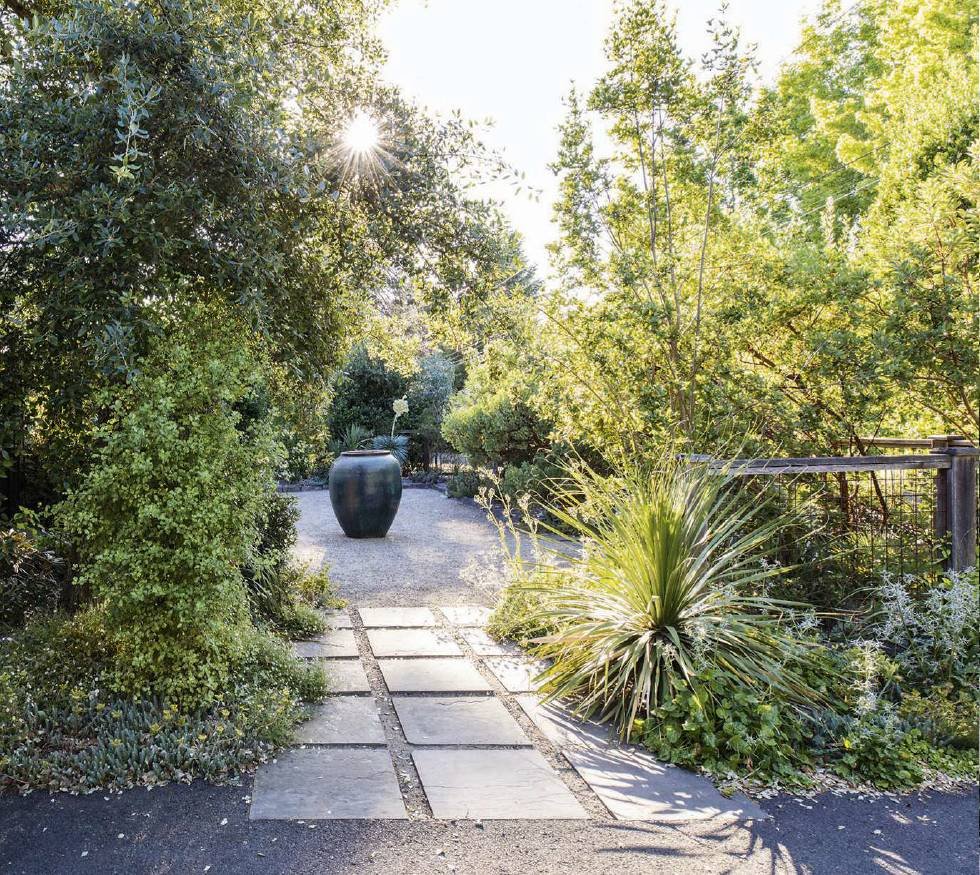 A tall, green Vietnamese urn provides a clear focal point, surrounded by a selection of evergreen trees including the slow-growing cork, Quercus suber and a dwarf form of a Californian native Umbellularia californica ‘O’Brien’, on the left and the architectural plant Nolina hibernica on the right.

Spiky rosettes of the dwarf palm Chamaerops humilis var. argentea add interest to a shady corner next to the house. To the left, a metal screen covered with various climbers,including the kiwi fruit relative Actinidia tetramera var. maloides, acts as a space divider. 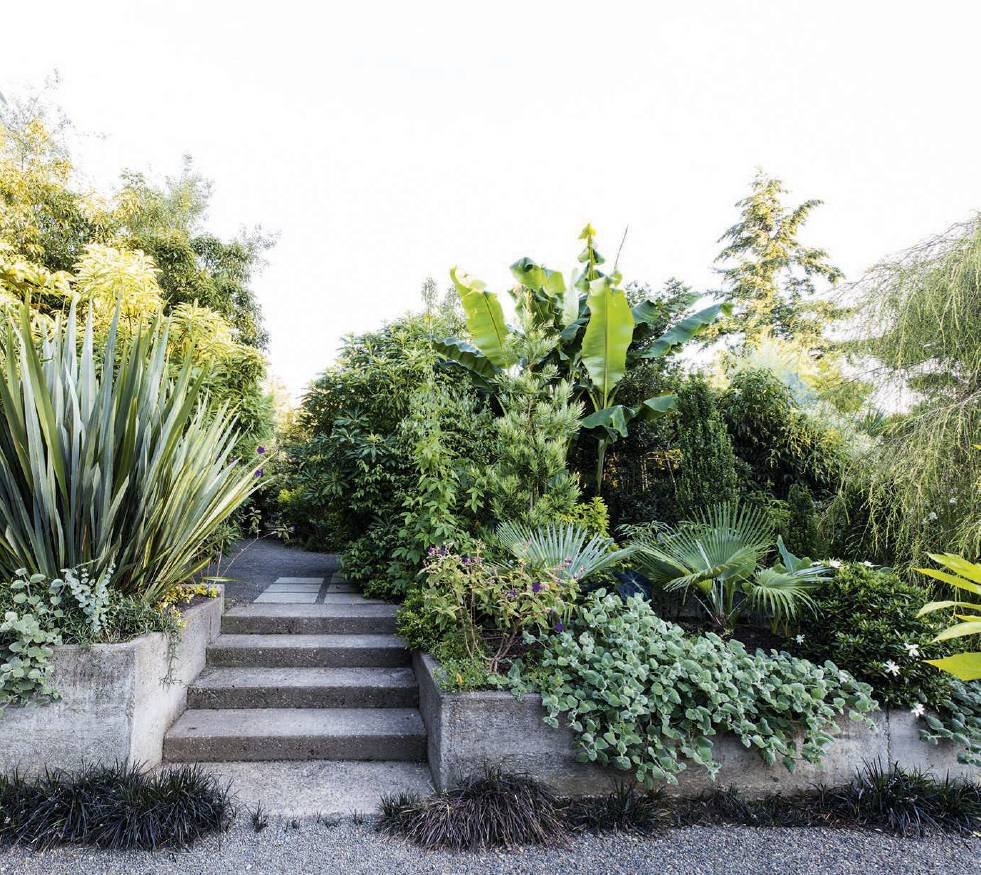 Beds on either side of these steps are filled with a structural mix of foliage plants, most notably the Phormium tenax ‘Striatum’ on the left and the silver foliage of Plectranthus ‘Trailing Silver’ on the right.

In this distinctive garden, Sean has shown that you don’t need to rely on traditional structure to create a strong, coherent framework. All you need is to use distinctive themes that provide year-round clarity. Once that is in place then experimentation and impulse plant buying can still find its place.

Find out more about Sean’s work at cistus.com ■