Inspired by the signature pink trousers of Albert Frey, one of the architects who built the property, the exterior is painted a soothing calamine shade.

Bill Stewart, one of the founders of the interior design studio Stewart Mohr Designs, and his husband Joseph Gyori

A bungalow in the historic Old Las Palmas neighbourhood of Palm Springs. Its three bedrooms, three bathrooms, large living area and kitchen are all spread out in a row, with a covered terrace and swimming pool outside. Built in 1964 by the architects Albert Frey and Robson Chambers, it’s a light-filled, airy space that is an icon of mid-century design.

We constantly have people stopping by to take pictures,’ says the interior designer Bill Stewart of his calamine pink house in Palm Springs, California – and it’s easy to see why. Placed against a backdrop of unforgiving slate grey mountains, vibrant blue skies and towering palm trees, it offers the same contrast as a perfect cloud of candyfloss – sweet, almost sugary, and so appealing to the eye. ‘The colour makes it really stand out,’ adds Bill. ‘We also love having groups of people tour the house and open it up at times like Modernism Week, which Palm Springs celebrates every February.’

The house is now a Class 1 Historic Site, meaning that it has to be visible to the public from the street, but Bill’s generosity in throwing open the doors comes from the fact that before he was the owner, he and his husband Joseph Gyori were fans of the property, too. ‘We used to drive by the house for many years and it was always intriguing,’ says Bill. ‘When we heard it was coming on the market in 2016, we jumped at the opportunity right away.’

An unlikely oasis in the desert, a three-hour drive from Los Angeles, Palm Springs is a step back in time. It is a shrine to mid-century modernism, awash with Eames loungers, Poul Jensen Z chairs, and walls painted in psychedelic hues. For a while earlier this decade, a 26-foot statue of Marilyn Monroe was the first sight that visitors to the city centre were greeted with, and in all its kitsch glory it looked right at home. ‘It almost seems like a neighbourhood frozen in time – but a really great time,’ says Bill. Much of Palm Springs was built in the Fifties and Sixties, including Bill’s home, designed by the architects Albert Frey and Robson Chambers. Their work has become iconic and owning a piece of local history was one of the main draws for Bill. When the couple moved in the floor plan had not been changed since the house was built, but one owner had added Colonial-style windows and doors, and everything was beige. ‘We didn’t want to change the footprint or modify the original design in any way.’ Bill says, so all the renovations have been strictly cosmetic. He set about restoring the house to its mid-century heyday, scouring antiques stores to find pieces such as Gabriella Crespi tables, lamps by Tommi Parzinger and Fornasetti chairs. Choosing colours wasn’t difficult. ‘Frey wore pink trousers and was associated with that colour. Painting the house pink was an homage to him and it gave new life to the structure,’ he says.

Of course, the pool, viewed from the house through floor-to-ceiling glass windows all along one side of the living area and master bedroom, was part of the house’s appeal, too. Bill spends most of his time at home on the terrace surrounding it, or in the water itself. ‘We swim every day we are here and keep the water at thirty-two degrees,’ he says. Dividing his time between Palm Springs and Atlanta, where he runs his studio Stewart Mohr Designs, every moment at the house is spent in holiday mode. ‘We open up all the doors and windows to enjoy the indoor/outdoor way of life,’ says Bill. It’s an approach that fits with the ethos of Palm Springs, a place where the drinks are usually longer than the days, as the sun retreats behind the mountains at around 3pm. When the weather turns cool, especially at night, Bill and Joseph gather around the firepit, usually with friends, some rosé wine or a Moscow Mule on the go. It’s an idyllic home in an idyllic part of the world, a relaxed but hedonistic playpen.

Check out Bill’s studio at stewartmohrdesigns.com

‘The space is very relaxing. For every hard edge there is something soft,’ says Bill. “An homage to a different design era, each piece of furniture is a functional work of art” Table, Leon Rosen for Pace Collection. The glass ornaments are from Bill’s collection for US brand Blenko Glass Company

In a corner of the kitchen is a small table where Bill and Joseph like to have breakfast and work. The small, cosy library is just off the entrance hallway. It is filled with light that is gently filtered through the lattice screen separating it from the living area.

One of three bedrooms, this room is filled with wonderful examples of mid-century design. WHAT MAKES THE PERFECT POOL PARTY?

WHICH ONE THING WOULD YOU SUGGEST VISITORS DO IN PALM SPRINGS?

Take a bus tour of the city.

THE LAST GREAT BOOK YOU READ?

Fins: Harley Earl, the Rise of General Motors and the Glory Days of Detroit by William knoedelseder.

WHERE - OTHER THAN PALM SPRINGS, OF COURSE - DO YOU LOVE TO BE?

Palm beach, where i’m from. i seem to love the palms.

What do you love most about living in the desert?

DO YOU HAVE A SPECIALITY RECIPE? 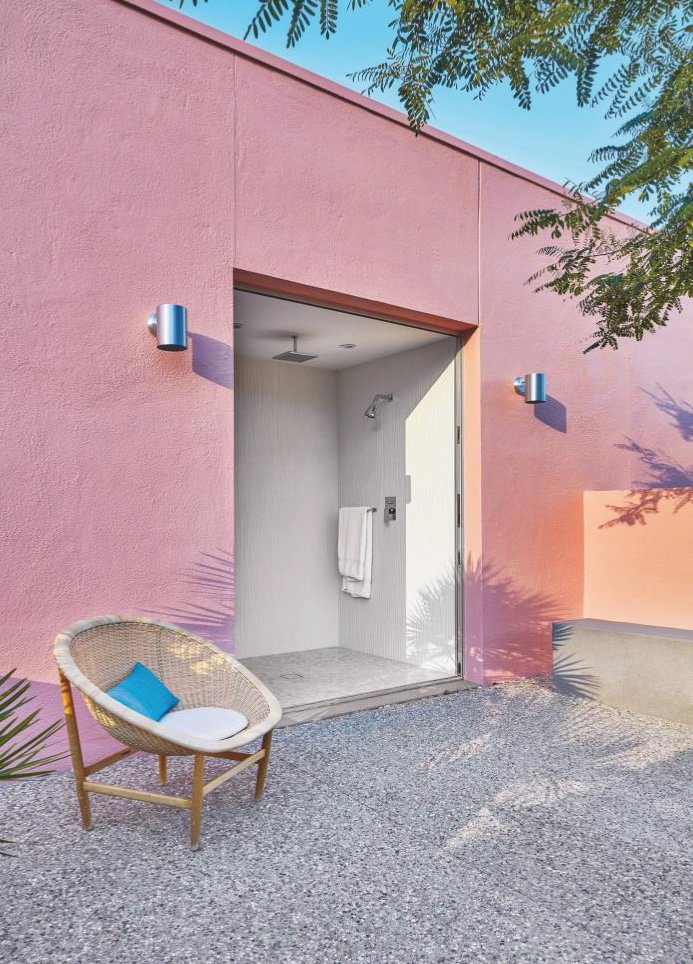 Adding a large shower to the exterior was central to bill’s renovation plans, making this a truly vacational home. ■