Story and photos by Jonathan Olivier 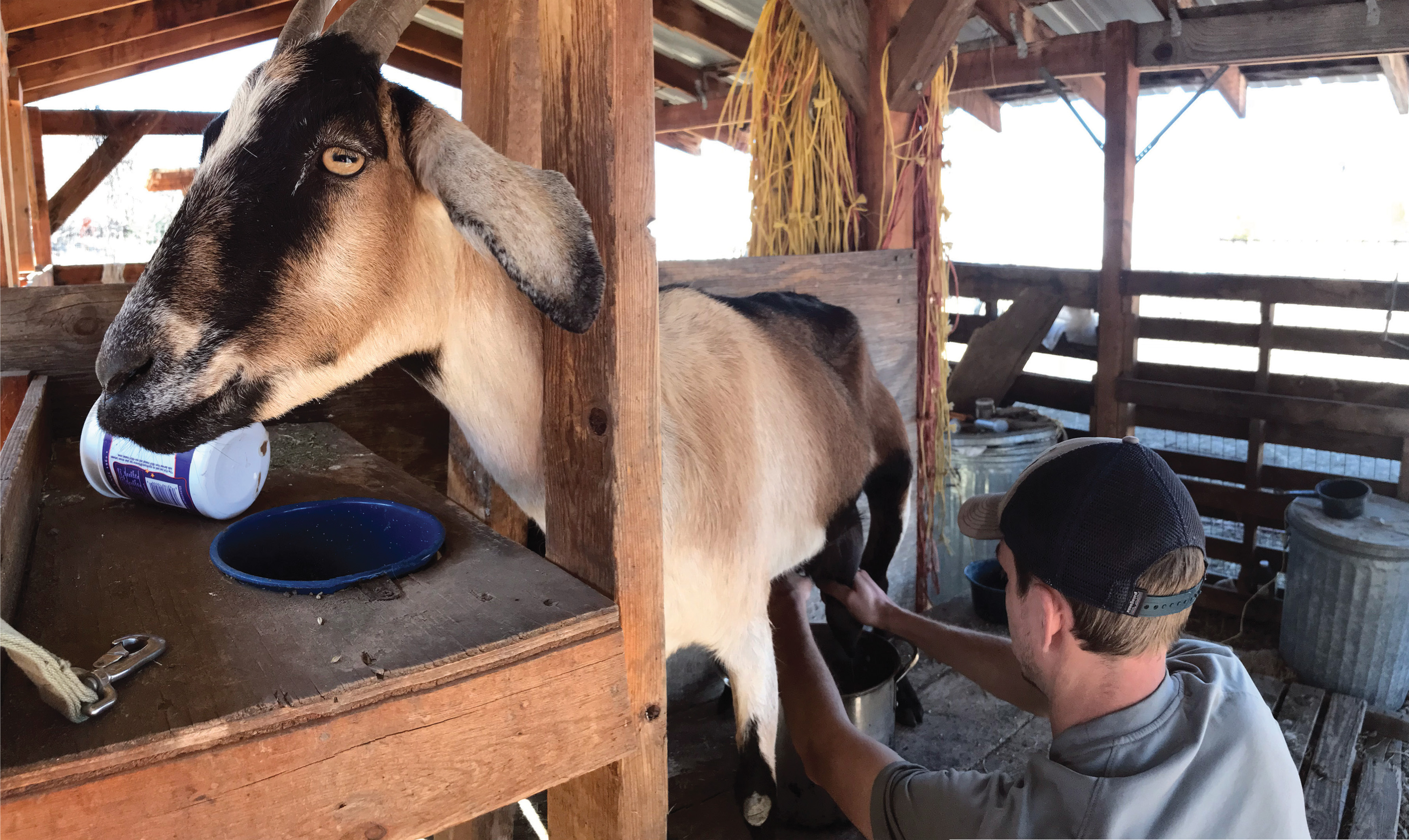 Lately, my life has been consumed by farming. I’ve been obsessively poring over seed catalogs to ensure I choose plant cultivars suited to my climate in southwest Louisiana; I need to spread my compost and build a processing shed; and I’m still trying to decide exactly how many hens I want.

My farm, Le Potager d’Acadiana (The Acadiana Kitchen Garden), sits on an acre of land that hugs Bayou Bourbeaux near Arnaudville, Louisiana, about an hour from where I grew up. It’s my first season, and, after two years of planning, it’s hard to believe the moment is finally here. Although both of my grandfathers were raised on farms, college was presented as my only option growing up. So even as my interest in sustainable food grew, my burgeoning career as a journalist kept me in an office.

Through my education, I discovered authors who revealed to me the flaws of America’s food systems: Wendell Berry, Michael Pollan, and Mark Sundeen. Their work introduced me to radically different ideas and helped shape what I wanted out of life. My aspirations included living a more sustainable life focused on local, homegrown food, but my career and location limited my ability to achieve this. At the time, I was living in an apartment outside Nashville, Tennessee, with only a balcony on which to grow a handful of plants. Most of my days were spent indoors, tied to a desk and a computer, supporting a system I increasingly didn’t align with.

After a suggestion from a friend, I looked into Workaway (www.WorkAway.info), an organization that connects people willing to exchange labor for free room and board with hosts who need help with everything from child care to farming. A quick online search uncovered a vast network of folks across North America who were looking for field hands, offering me the opportunity to experience farming firsthand. I wanted to make a fundamental change, and it seemed that Workaway was my ticket.

So, in December 2017 I quit my job, and vowed to cross the United States and Canada in search of farms with integrity. I wanted to learn all I could about sustainably growing food and raising animals, with the intent of one day starting my own farm. No longer would I work from a desk without exploring my agricultural inclinations.

In less than two years, I traveled more than 30,000 miles and worked on 13 farms. I received a valuable education from farmers who weren’t just looking for an extra hand, but were also eager to pass on their knowledge to support the local food movement.

While starting a farm can feel like a daunting task, spending time beforehand as an apprentice is a terrific way to gain real-world experience and valuable knowledge that’ll help you along the way.

Plenty of workshops and programs are designed to teach novice farmers, but most carry a hefty price tag. Volunteering attracted me because — although I wouldn’t be getting paid — my education would be free and empirical. Many paid farming gigs require experience, while most volunteer positions don’t. So, as a novice, I chose to volunteer on several farms to expose myself to an eclectic set of agricultural practices. Plus, if you’re unsure which region you’d like to live in, traveling to several can be instructive.

I was in a unique position to undertake this journey as an unpaid worker. Although I quit my full-time job, I could work as a freelance journalist for several publications while traveling from farm to farm. Since farmers typically only require 25 hours of work per week, working remotely for 15 or more hours was feasible. My expenses were minimal because housing and meals were provided. So you could explore a similar arrangement, or plan ahead and save up money prior to starting. 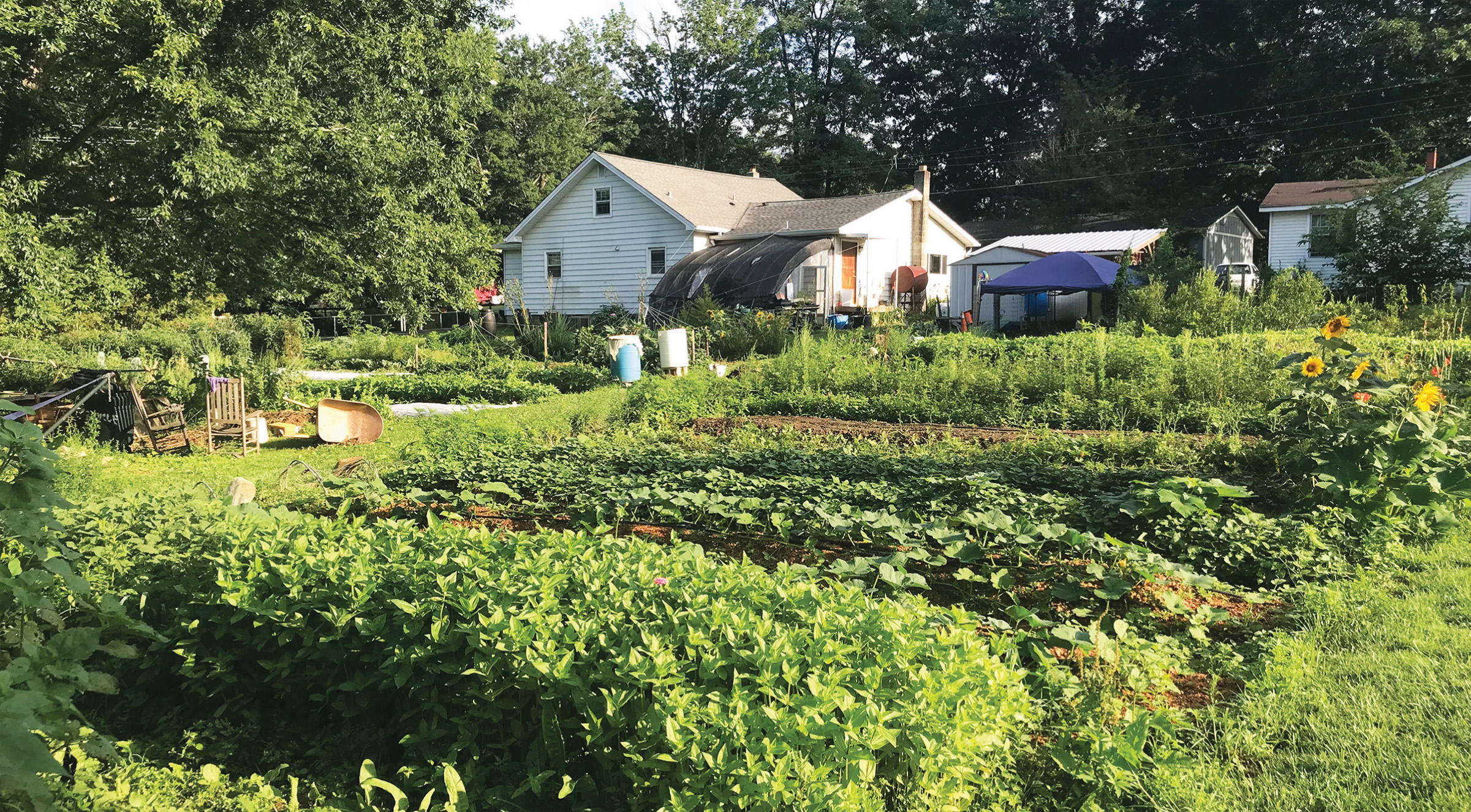 However, an unpaid gig may not be possible for some folks. If that’s the case for you, search the ATTRA Sustainable Agriculture website (www.ATTRA.NCAT.org). ATTRA is managed by the National Center for Appropriate Technology, which lists paid apprenticeships across North America. Note that some farmers expect paid apprentices to have prior experience, and many require full-time work for an entire growing season.

A Farm That Fits

A handful of organizations facilitate connections between volunteers and farmers. Two of the most prominent are World Wide Opportunities on Organic Farms (WWOOF) and Workaway. Both organizations require a membership fee and use online profiles to make it easy to find hosts. 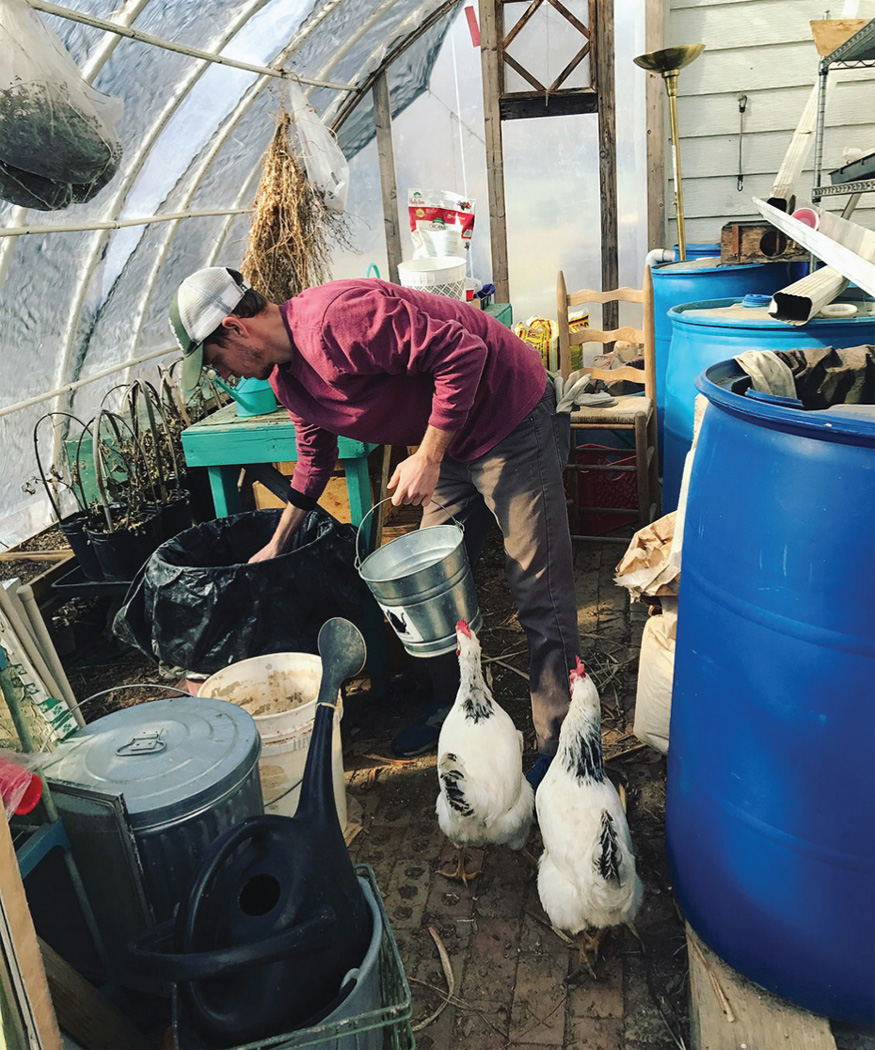 Before creating a profile, make a list of the farming techniques you’d like to learn. This list will make it easier to fill out personal details on your profile page, but perhaps more importantly, it’ll help you determine who you’d like to work with. For instance, I was initially interested in permaculture, so I contacted farmers who practiced those principles. But as I continued on my journey, I discovered I was more interested in biointensive market gardening using no-till methods than I was in permaculture, so I started working with people employing those techniques. Accept that however strong your initial desire to learn a certain practice is, your list will evolve over time.

Although many skills can be applied all over the world, learning from someone local has a lot of benefits. A local farmer can provide specific insight into your region, including information about pests, the climate, and the local market. However, if you’re unsure where you’ll eventually settle — as I was — traveling can provide information on farming in different regions of the country. Early on in my journey, I realized I didn’t want to live in the interior West, as I’d first thought, because of irrigation issues. I decided instead to settle in my home state of Louisiana.

After you’ve compiled a list of farms that fit your needs, send each one a clear and detailed message that communicates your motives. Schedule a phone or video call before accepting a work-trade offer to make sure you and the farmer have a good understanding of what you both expect from the experience.

If possible, arrange to stay on a farm for at least a month, and no less than three weeks. Any less time, and you won’t be able to understand the full operation of the farm. The farmer will also be less likely to invest as much time in teaching you if you’re only there for a week or two.

Typically, farmers require 25 hours of work per week, no matter the weather. You’ll need to prepare for hard labor and long hours working outside, at times in bad conditions. During my time as a volunteer, I dug ditches, pulled thousands of weeds, and scooped more poop than I care to remember. Since these are common tasks on all farms, you’ll quickly discover whether you’re cut out for this line of work. Although the work isn’t glamorous, you’ll learn from it. Even weeding can offer an education, such as when to pick them and which are problematic. Look at every task as a potential lesson, and you’ll never lose sight of the benefits of your work. As you and the farmer build a relationship, they’ll likely assign you more important tasks. 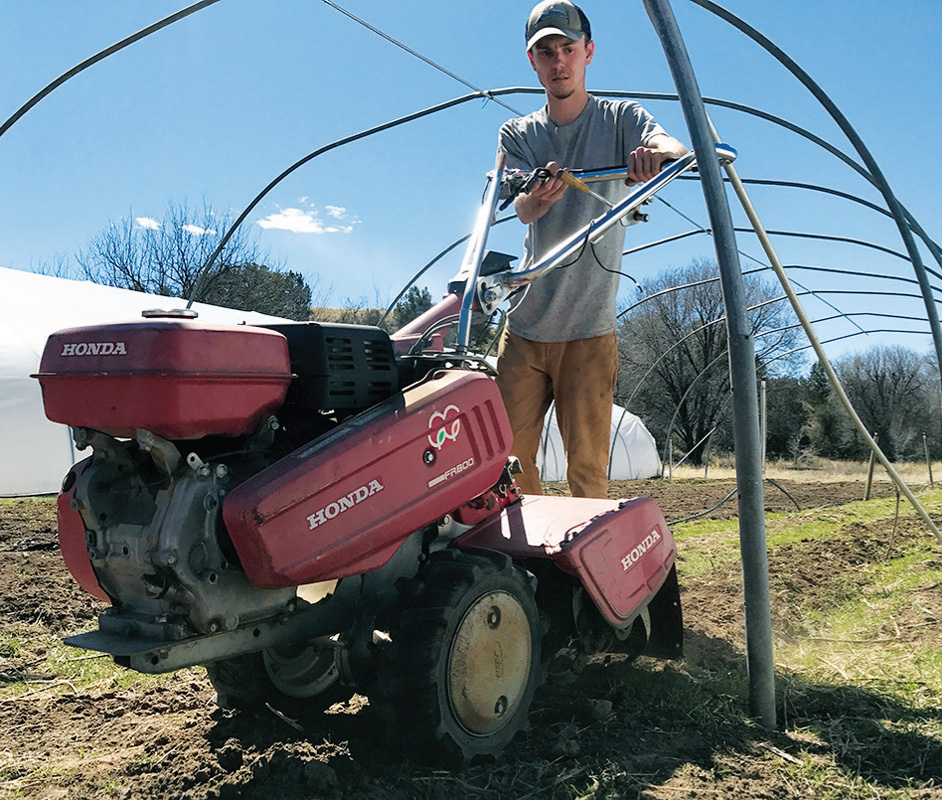 Prepping the soil for a greenhouse in Gila, New Mexico. 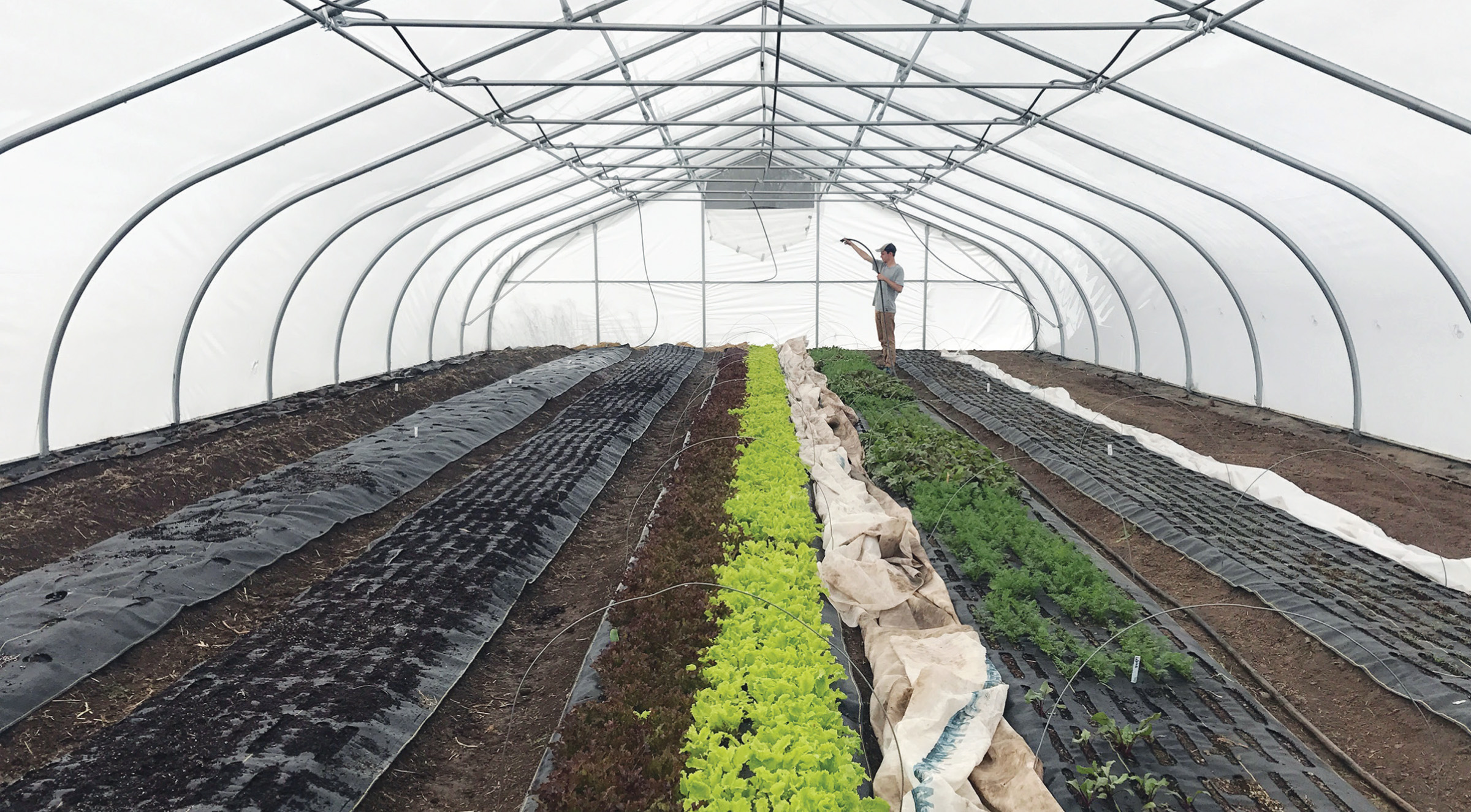 Cooling off the lettuce plants on a hot day in Gila, New Mexico.

Reiterate that your main goal is learning, and ask the farmer to give you plenty of details beyond the basic task instructions. Have a list of questions prepared to ask during lulls in the work. A farmer in New Mexico sat down with me a few times a week so I could ask questions I’d prepared and others that had popped up during the day. I jotted notes in a notebook. I now use it as an invaluable source of information I can reference, as well as a keepsake from my journey.

Above all, have an open mind. I found that entering each situation with a positive demeanor and a willingness to take on any job equipped me with a wealth of information. A farm apprenticeship is about exploring what will suit you best, so treat every chore as an appetizer, sampling each piece of the farm so you can get a taste of what it’s like as a whole.

As I neared the end of my travels in spring 2019, I decided it was time to make a plan for my farm. I’d been mentally building one for a few months, but putting it on paper gave it a tangible quality that I could tweak. It took me almost two years to get to this point, and there’s no easy way to know when you’re ready. For me, the timing felt right: I knew what kind of farm I wanted and where I wanted to live, and my grasp of agricultural practices had grown tremendously.

The next step was to make connections in my new home, and hopefully, ones that would guide me toward land and programs that could benefit me. I found the Acadiana Food Alliance, which is an organization that focuses on helping farmers in southwest Louisiana. The folks there provided information on programs available to me, such as workshops in my area, to ensure I complied with the Food Safety Modernization Act.

After making connections, I turned my attention to the problem of finding land. According to a 2017 survey by the National Young Farmers Coalition, buying land is the biggest barrier to entry for young farmers. I experienced this firsthand as I began to hunt for property. Outrageous prices coupled with the expectation of a relatively low income dissuaded me from purchasing property. Instead, I looked into alternative options.

Ultimately, I found an opportunity to live on a landowner’s property in exchange for produce and labor. Farmers I’ve worked with call this a labor exchange lease, and it’s more common than you might think. Network as much as possible, and propose such an agreement with the landowners you meet; make it clear that this relationship would be mutually beneficial.

Renting and leasing land are more conventional options if you can’t buy at the time. Often, leases can span a few years, which will give you the opportunity to experiment during your first few growing seasons, as well as hunt for property in your spare time. 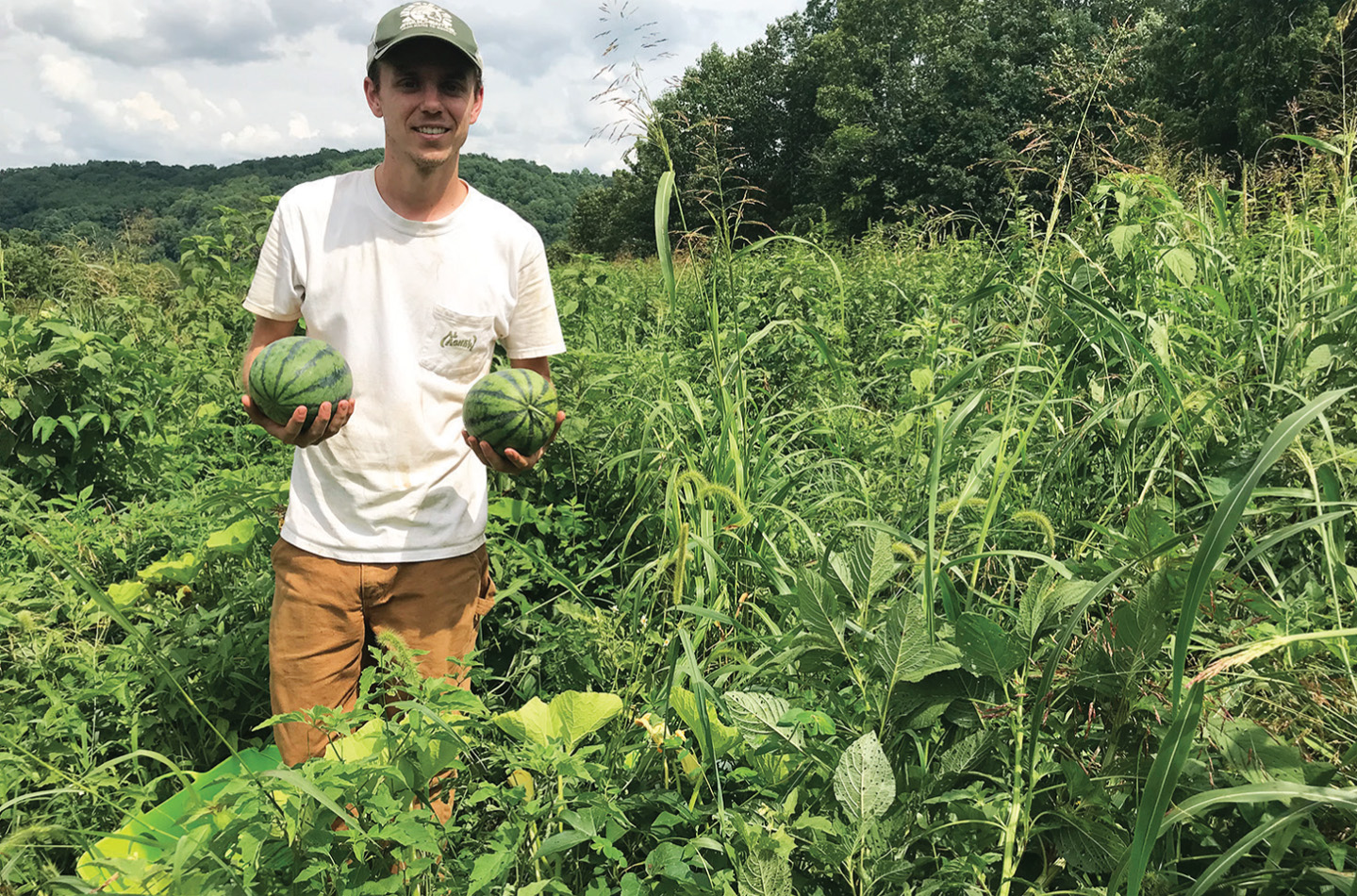 Displaying watermelon from the summer harvest in Riceville, Tennessee. 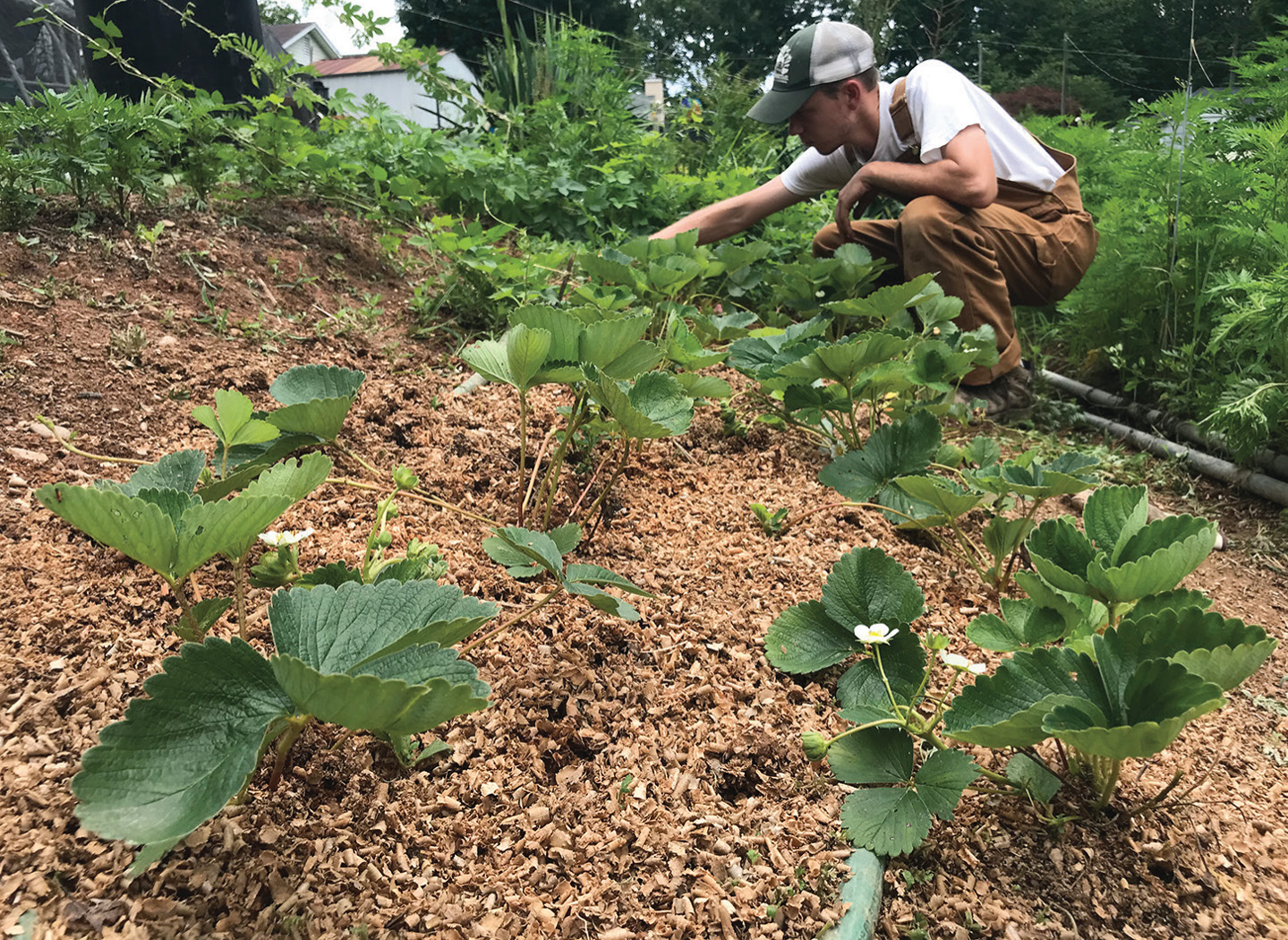 Land trusts and land transfers are also options, though less common. Land trusts are nonprofits that protect resources, such as farmland, that are at risk from development. Typically, land trusts ensure the price of the property doesn’t rise above its agricultural value, so it remains affordable to budding farmers. A land transfer is when an existing farm operation is transferred to a new owner, which is usually a lengthy and involved process. The Center for Rural Affairs offers detailed information on its website (www.CFRA.org), as well as a list of programs across the country that help facilitate land-transfer connections. Opportunities for land transfers will likely increase in the future, as the average age of farmers in the U.S. continues to increase; at the last census, it was 58.

Lately, a nervous feeling has been welling up inside me. I think it’s because I recognize the obstacles ahead. What quells those worries is knowing my apprenticeships provided a solid foundation for my farm. Those experiences helped build the sort of character I’ll need in this tough yet rewarding line of work.

Jonathan Olivier is an author and journalist from south Louisiana who writes about the outdoors and the environment. For two years, he traveled across North America to work on farms before starting his own, Le Potager d’Acadiana. ■