There are those who like it hot and those who shy away from even a hint of spice. But almost everyone can benefit from the medicinal actions of cayenne pepper (Capsicum annuum or frutescens), given the right amount. Whether cayenne is the spice of your life or just the thought of it makes you sweat, this remarkable herb (technically, cayenne is a spice, but since it’s often used as an herbal supplement, we’re going to refer to it as an herb in this article) is a staple in many a kitchen cupboard … and it may find its place in your medicine cabinet, too.

You may be familiar with cayenne as an ingredient in your favorite chili, Mexican hot chocolate, salsa, or even medicinal vinegar tonic. Cayenne, a bit bitter but widely known for its peppery zing, blurs the boundary between food and medicine. Culinary kicks aside, for any condition that necessitates a warming, sweat-inducing, stimulating, pain-relieving, and fiery treatment, cayenne may be just the thing.

Some of cayenne’s most well-known properties are as an antiseptic, overall stimulant, bile-production booster, detoxifier, circulatory and liver tonic, blood thinner and cleanser, and appetite stimulant. Cayenne fuels and spurs the metabolic system into action and is dynamite for peristalsis (and strong, efficient digestion in general).2,5

Some people swear by putting a little bit of cayenne powder in their socks when working outside on a cold day, taking advantage of its heat-activating properties. Others tout cayenne’s remarkable ability to stop even an open wound from bleeding, stymieing unwanted blood flow either externally or internally. But you don’t necessarily have to feel the burn in order to experience the medicinal properties of cayenne. Including even small amounts of it as a spice in your breakfast scramble, lunch soup, or dinner marinade may be enough to kick your innate fire into a healthy gear. 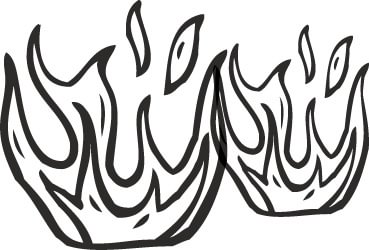 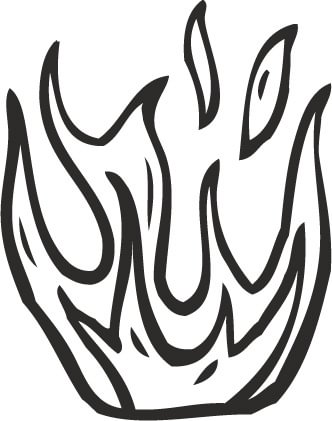 In Southern folk medicine, one system of holistic healing native to the U.S., people are classified into four constitutions according to the elements: fire, water, air, and earth. While everyone has some aspect of all four qualities, people are typically dominant in one or two of these.

An air-earth-dominant person, for example, might be full of ideas and highly intellectual, but also stable, unchanging, and grounded in common sense.3

According to this tradition, cayenne is a fire herb.3 People who are deficient in the fire element can especially benefit from its stimulating effects. For someone who already represents a very strong fire—that is, someone who carries heat in their physical or emotional body—even just a little cayenne might be too stimulating.

Flame-shaped cayenne peppers are fruit ruled by the fieriest of forces: the sun.1 Cayenne sparks something ancient and alive in even the chilliest or most exhausted among us. It is said to make a sluggish digestive system, or even an immune system that’s slacking on the job, come alive again.3

One of the main active constituents of the cayenne fruit is capsaicin. It might seem counterintuitive, but the way capsaicin works is by stimulating pain in the tissues it touches. It does this by encouraging first the output and then the eventual reduction of substance P, a type of neurotransmitter that acts as a messenger of pain sensations between nerve endings and the brain. In this way, capsaicin interferes with the body’s ability to feel pain transmissions in the tissues treated. When using cayenne for pain relief, you may want to apply it frequently and regularly. Be forewarned that, because part of cayenne’s effectiveness is as a counterirritant, some people may experience an increase in pain before it reduces; others, however, may not.6 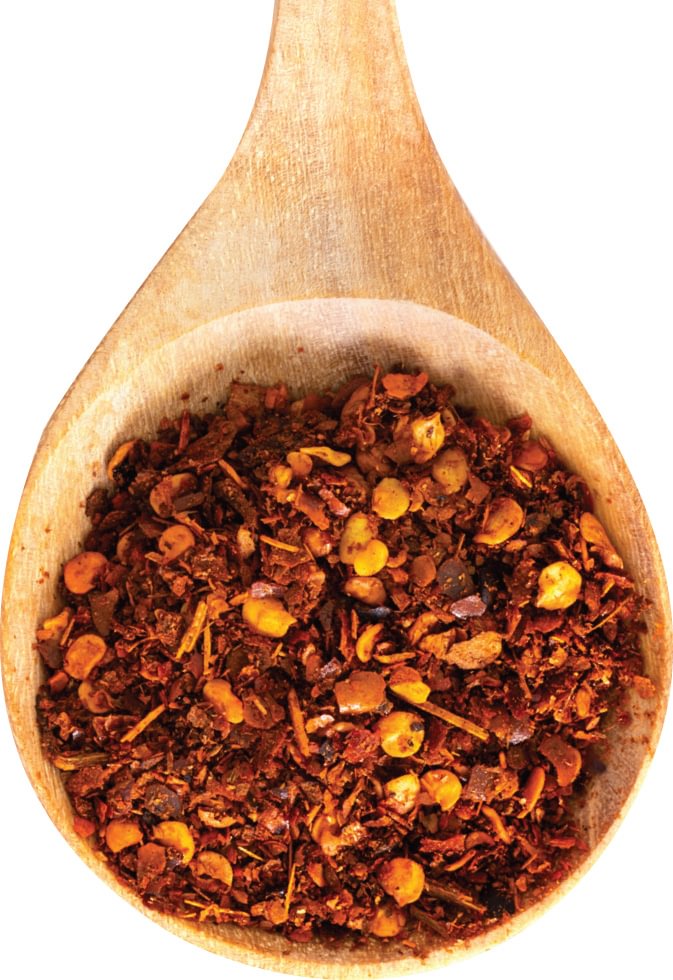 Don’t let the fire get out of control! You might know the cayenne in hot sauce to make your sinuses run, but if the heat becomes too much, don’t push it. Everyone has their own personal spice threshold. Cayenne should be kept away from any sensitive tissue, the eyes, and the mucous membranes. If you have never used it topically before, apply cayenne first to a very small area of skin to be sure you do not have an allergic reaction. Cayenne is potentially contraindicated for people with ulcers, gastritis, heartburn, anemia, or hemochromatosis, and it’s a well-known blood-thinner, with the ability to break up blood clots and even hematomas. You should consult with your physician before using it if you are on a bloodthinning medication.1,4

CAYENNE PEPPERS HAVE BEEN USED MEDICINALLY FOR 9,000 YEARS AND CULTIVATED FOR 7,000

SPICY COMPOUNDS OR CAPSAICINOIDS, INCLUDING THE MOST COMMON ONE, CAPSAICIN, MAKE UP ABOUT 1.5% OF CAYENNE PEPPER 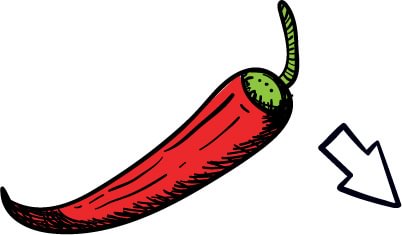 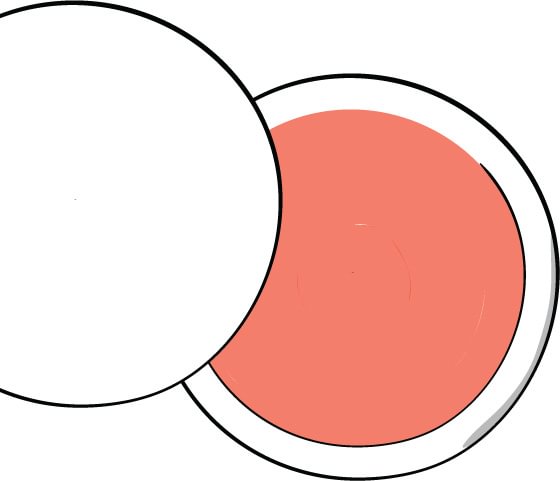 Topical use of cayenne is easy, cost-effective, and powerful kitchen witchery for anyone who deals with sore muscles, circulatory issues, chronic pain, or even arthritis. A cayenne oil or salve can be applied to closed wounds and bruises and may also act a styptic—a blood-stopper—when used on a fresh cut or abrasion. Don’t be daunted by the task of making an herbal salve. It’s only one more step beyond creating an infused herbal oil, which is simple and makes a great activity that even the kids will enjoy.

1 cup olive oil (other light-colored oils such as grapeseed, sunflower, or coconut can also be used)
¼ cup cayenne powder

1 Combine the carrier oil and the cayenne in a Mason jar to make your infused oil. You may choose to do an infused oil in a variety of different ways. Heat it gently in a crockpot or slow-cooker for several hours, making sure the temperature is kept below 110 degrees. Or preheat your oven to its lowest setting, turn it off, and put your oven-safe bowl of oil and herb in it fora t least a few hours and preferably overnight. You could heat the oil and herb in the top of a double boiler on very low heat for an hour or two and then turn the heat off and let the mixture sit overnight. Or do a solar herbal-oil infusion by placing the lidded glass jar on a sunny windowsill and leaving it to sit for 3-6 weeks. When the oil takes on the color and spicy aroma of the cayenne, it is fully infused.

2 Strain the oil using cheesecloth or a very fine strainer. Squeeze the herb to get any last remaining drops of oil out. When working with cayenne, be sure to finish this step by washing your hands well with soap and water so that you don’t risk the irritating oil touching your eye or any sensitive mucous membranes. Your herbal oil is finished. Bottle and (very importantly!) label.

3 To make your herbal oil into a salve, which has a longer shelf-life and is somewhat easier to use than the oil, first prepare any jars or tins you will be using to store your salve by making sure they are clean, dry, and ready to be filled. Combine the oil with the beeswax and heat on low in a pot or a double boiler until the wax is just melted. Stir the oil and wax until they are thoroughly mixed. Turn off the heat and immediately pour your mixture into the jars or tins. Let these set and cool before you lid and label. Store in a cool, dark place.

Use your flaming cayenne oil or salve anywhere you might want to apply heat, to reduce pain, inflammation, or swelling, to ease psoriasis, to relieve nerve tension or muscle and joint soreness, to improve circulation, to reduce bruising, or to counteract arthritic stiffness. It makes a fantastic massage oil for tired, achy, or chilled bodies, and a great finishing rub after an herbal footbath.2,5 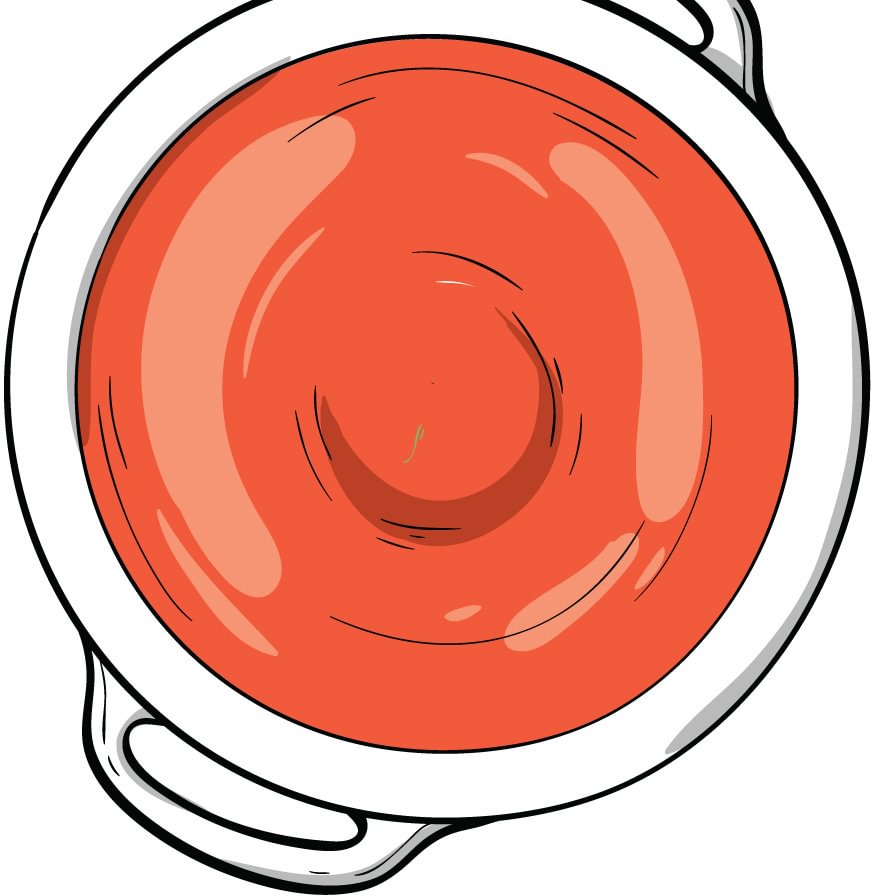 Phyllis Light, fourth-generation herbalist, author of Southern Folk Medicine, and my mentor, teaches that cayenne can work wonders for people who are lacking in digestive fire. For those who are nutritionally or physically depleted or wanting to detox, cayenne is easy to digest and actually lowers inflammation in the gut. Taken in small amounts along with a meal, cayenne pepper can assist the body in assimilating nutrition from food and serve as a stimulating digestive aid. Cayenne pairs well with sage, which also helps the body achieve maximum nutrient absorption and acts as a carminative or stomach-soother. Try this nourishing recipe for rejuvenating cayenne broth when you are recovering from an illness, feeling like your digestive juices could use a little revving up, or are otherwise low on bodily resources and want to fan the vital flame of your digestion.3

Add an egg yolk to a cup of steaming hot broth and stir it well. Add salt and herbs to taste. Sip and savor.