The Talk of the Town
Comment: The Health-Care Defense
Amy Davidson Sorkin

One of the central questions of the 2020 Presidential campaign was posed last week before the Court of Appeals for the Fifth Circuit, in New Orleans, to a lawyer for the Trump Administration, who didn’t even pretend to have an answer. A three-judge panel was hearing the appeal of a ruling by Reed O’Connor, a Texas district-court judge, that the Affordable Care Act, or Obamacare, was unconstitutional in its entirety—an opinion that the Administration has endorsed. O’Connor had ordered that the government cease implementing or enforcing all aspects of the A.C.A., including its protections for people with preëxisting conditions, its ban on lifetime caps, its expansion of Medicaid and coverage for young adults on their parents’ plan, and its support for the treatment of addiction. The order could cost tens of millions of people all or much of their coverage, and throw the health-care system, which accounts for a fifth of the economy, into chaos. But O’Connor, in what Judge Jennifer Elrod, of the Fifth Circuit, described with no apparent irony as a “modest” act, had stayed his own order, pending appeals. Here, now, was the first appeal. So, if the stay is lifted, Elrod asked, “What’s the government planning to do?”

As the lawyer, August Flentje, struggled to answer (“This is a very complicated program—multifaceted, obviously”), it became clear that Republican opposition to the A.C.A. remains a project of blind destruction. One of President Trump’s few health-care initiatives, on drug prices, fell into disarray last week, with one measure defeated in court and another abandoned. Otherwise, he has mostly complained that Democrats want to extend care to, among others, undocumented people. His almost pathological need to undo President Obama’s legacy can be added to the mix; the restraint sometimes said to characterize conservatism can be subtracted. And there is a growing conviction among the A.C.A.’s opponents that the current Supreme Court, given the addition of Neil Gorsuch and Brett Kavanaugh, will back them up.

They may be right; the threat that this case, Texas et al. v. United States, presents to Obamacare should not be underestimated, especially as it is likely to reach the Court in the heat of the 2020 campaign. The case was brought by twenty states whose most distinct common quality is their redness. Maine and Wisconsin dropped out of the suit after the 2018 midterm elections, when their Republican governors were replaced by Democrats. When the Trump Administration declined to defend the law, a group of mostly blue states—currently twenty-one—got permission from the district court to do so. They were joined by a lawyer for the Democratic-controlled House of Representatives. When Kurt Engelhardt, another of the appeals judges, pointedly asked that lawyer why the Senate hadn’t sent someone to defend the law, he replied that the Senate “operates differently.” It is, after all, led by Mitch McConnell, not Nancy Pelosi. 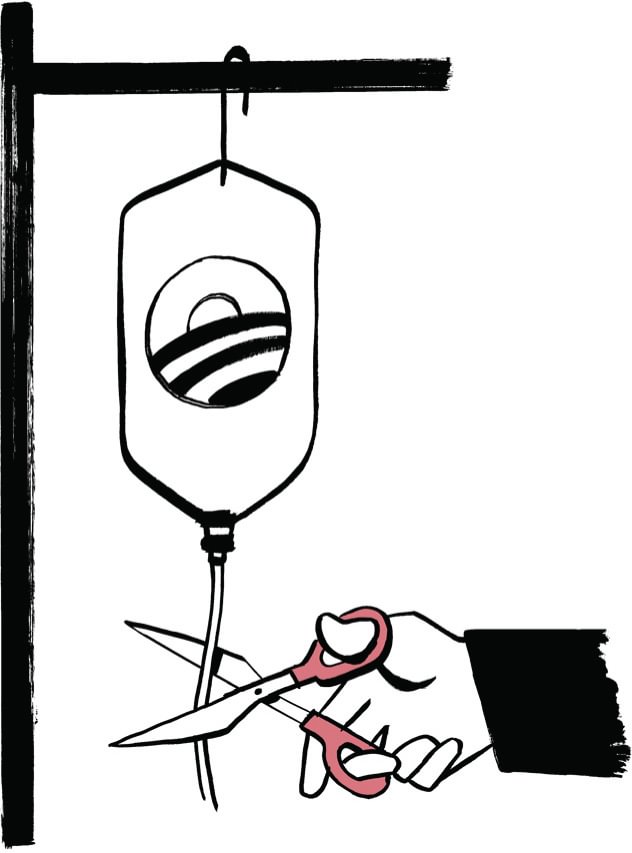 The complaint concerns the so-called “individual mandate.” When the A.C.A. was enacted, in 2010, it directed every American to get insurance or face a penalty, which was calculated on a sliding scale (and dropped altogether for low-income people; other groups, such as prisoners, were exempt). The constitutionality of the mandate was the subject of an earlier challenge to the A.C.A., but Chief Justice John Roberts wrote an opinion classifying the penalty as a tax, which Congress has the power to levy. Trump’s 2017 tax package, however, reduced the penalty to zero. For the A.C.A.’s opponents, this led to a wild surmise: if the mandate had survived because the penalty was a tax, the absence of a tax might make the mandate unconstitutional. That point might seem academic—constitutional or not, the mandate is, for all practical purposes, already gone, now that there is no penalty for ignoring it. But Texas et al. makes a far more radical claim: The phantom mandate is not only unconstitutional but “inseverable” from the rest of the law. If it is invalid, then all nine hundred and six pages of Obamacare are also invalid.

This argument is as senseless as it is ruinous. It’s like saying that the 2017 tax bill was a stealth total repeal of the A.C.A., something that even leading Republicans denied at the time. And yet at least two of the judges, Elrod and Engelhardt, appeared inclined to accept it. The main issue for them seemed to be just how much of Obamacare to trash.

On that question, too, the Administration has been erratic. Initially, it argued that the court should invalidate only certain provisions, such as preëxisting-condition protections—a major feature that Trump has elsewhere claimed to like. Then, in March, the Administration said that it agreed with the Texas ruling: burn it all. Two months later, though, it argued that, while every word of the law was invalid, any relief that the lower court granted should be limited to damages suffered by Texas and the other states, without defining what those damages might be. This led to utter confusion in the oral arguments: Would there be different versions of the law for different states? Which provisions might the government want to keep? (“You would leave in place the calorie guides?” Judge Elrod asked.) Flentje, the Justice Department’s lawyer, told Elrod that, really, “things don’t need to get sorted out until there’s a final ruling”—that is, from the Supreme Court.

Obamacare has reduced the number of uninsured Americans by twenty million and, while the system is imperfect, premiums are more manageable than is often reported. But, as the Texas case suggests, it can still all be undone. And there is much more to do; the United States has not achieved universal coverage. All the Democratic Presidential front-runners share that goal, but they have what are sometimes sharply diverging proposals for getting there. Vice-President Joseph Biden, Mayor Pete Buttigieg, of South Bend, and former Representative Beto O’Rourke, of El Paso, want to build on the A.C.A. and make Medicare available to all as a public option, alongside private insurance. Senator Bernie Sanders, of Vermont, has a Medicare for All bill that aims to displace private insurance, and in most cases make it unlawful, leaving a public option as the only real option. Senators Elizabeth Warren and Kamala Harris have signed on to Sanders’s plan, although Harris has at times tried to downplay the impact on private insurance.

The next Democratic debates, which will be held on July 30th and 31st, may sharpen the candidates’ positions or further polarize them. The Democrats need a plan to protect Americans’ health coverage. And they need a plan to win in 2020. Those might even be the same thing. ■