Reviews: Film
Once Upon a Time…in Hollywood
Directed by Quentin Tarantino

Tragedy writes an abrupt end to a golden movie era. 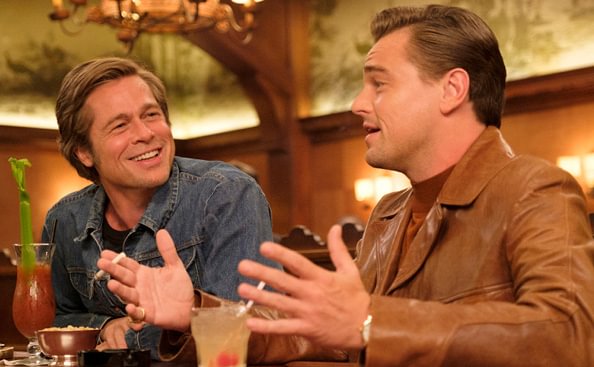 Pitt and DiCaprio: A twilight pairing

Though known for stylized violence, “Quentin Tarantino is at his best when he’s motivated by affection,” said Stephanie Zacharek in Time.com. That’s why the Pulp Fiction director’s new film, a “tender, rapturous” ode to a vanished Hollywood and to an actress lost too young, “ranks among his finest.” The movie is set in 1969, in a Los Angeles changing even faster than the rest of America. A new generation and a new breed of drugs are invading the neon-lit dreamworld, and the old guard watches warily. Leonardo DiCaprio and Brad Pitt are “marvelous together” as Rick Dalton, a fictional has-been 1950s TV star, and Cliff Booth, Rick’s longtime stunt double and only friend. Still, this movie “really belongs to one person”: Margot Robbie, who plays Sharon Tate, the 26-year-old real-life rising star who was murdered in 1969 by Charles Manson’s followers. Whenever Robbie is on screen, she “fills the movie with light.”

“If Tarantino makes any missteps, they come at the end,” said Bilge Ebiri in NYMag.com. Until then, Once Upon a Time…in Hollywood is a “sprawling, dreamy” re-creation of a moment in time when all of his obsessions had currency, including B-movie Westerns, cop dramas, 1960s psychedelia, and “fast-talking showbiz backroom blather.” For two hours, it’s the most fun Tarantino has had in years. Even so, “there’s a lilting sadness at the film’s heart.” At one point, DiCaprio had me in tears over a scene in which Rick confronts his growing irrelevancy. And in perhaps the movie’s most potent passage, Robbie’s Tate, who is new to stardom, sits alone in a theater watching herself on screen in a comedy. Her eyes dance whenever someone in the audience laughs at one of her bits.

For a long time, the mix of fiction and real-life tragedy feels promising, said Owen Gleiberman in Variety. We know the Manson murders are coming, and the presence of Manson cult members at the periphery of the story “suggests something in the Hollywood cosmos that’s diabolical in its bad vibes.” But in the end Tarantino plays with the reality of the killings in a way that trivializes the tragedy. By the time the closing credits roll, “he has reduced the story he’s telling to pulp.” True, the “bizarre” denouement “might well have you replaying the entire film in your head,” said Peter Bradshaw in TheGuardian.com. Far from being a punt, though, the final twist is “entirely outrageous, disorienting, irresponsible, and also brilliant.” ■