INTERIORS
A PILE OF PEARLS
Aptly enough for an 18th-century pearl-fisher’s mansion, La Bella Escondida in Cádiz offers no clue to its precious contents from outside. But prise open the door and all manner of treasures are revealed, from iridescent Imari china to Murano chandeliers. Celia Lyttelton is dazzled by the cultured touch of its set-designer owner.
Photography: Tim Beddow Nicolas Luca de Tena, who has worked for the Spanish royal family as an art restorer, painted the trompe-l’oeil urns and terracotta-coloured niches in the entrance. Sgraffito faux stone and stucco by muralist Dusan Curcovic decorate the walls, adding to the sense of fading grandeur. The sarcophagus bath, one of two here, is a 17th-century copy of a Roman original. 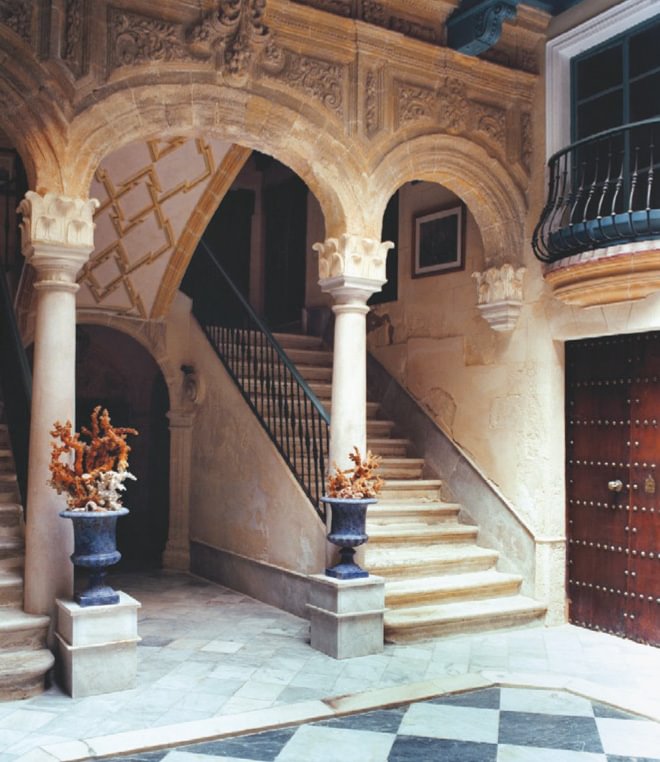 an imperial staircase lies behind a triple arch 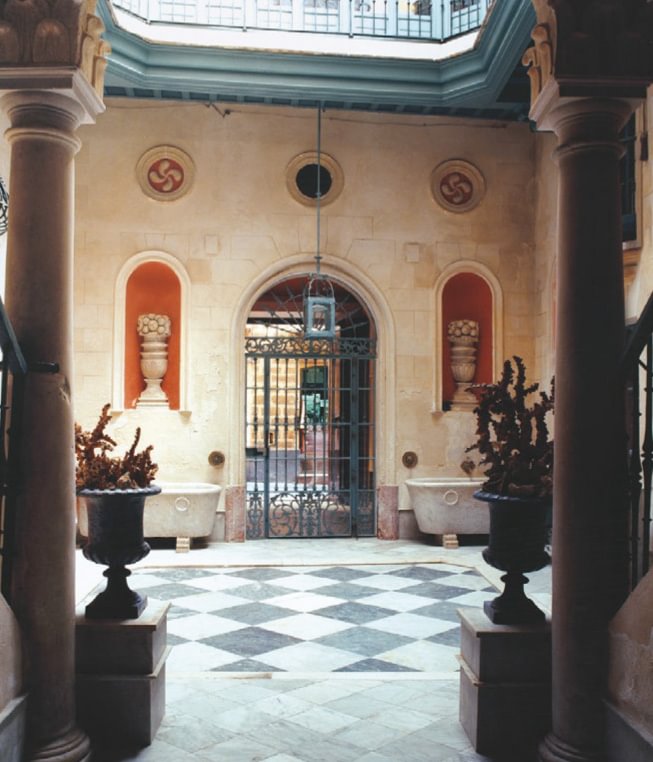 the street outside can just be glimpsed through a wrought-iron inner gate and the open front door. 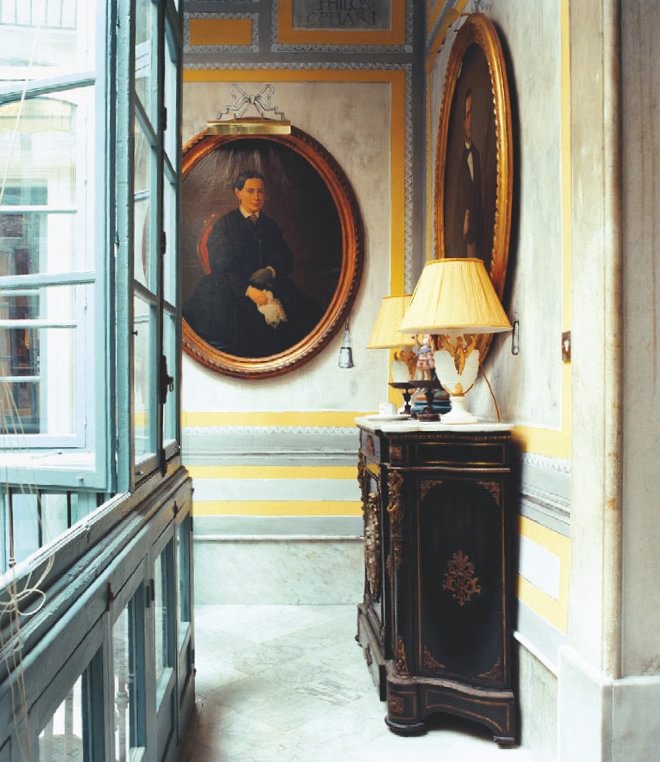 Nicolas Luca de Tena is also responsible for the paint effects on the walls of the first-floor landing. the glazed gallery is hung with ancestral portraits, many of which Manuel Morales de Jódar bought for a song from his relatives The gilt Rococo pelmets above the windows in the drawing room once adorned the Palacio de Villapanés in Seville, which is now a hotel. Two enormous 19th-century Murano chandeliers have been adapted for electricity 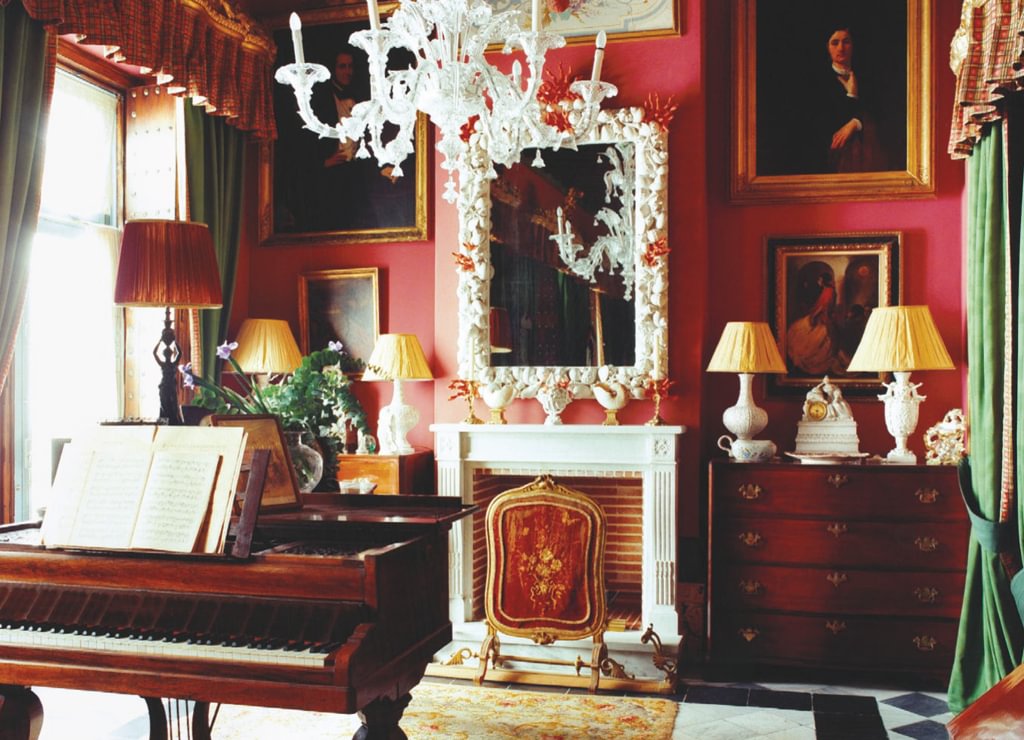 the porcelain looking-glass frame is the work of Italian ceramicist Rita del Pra. 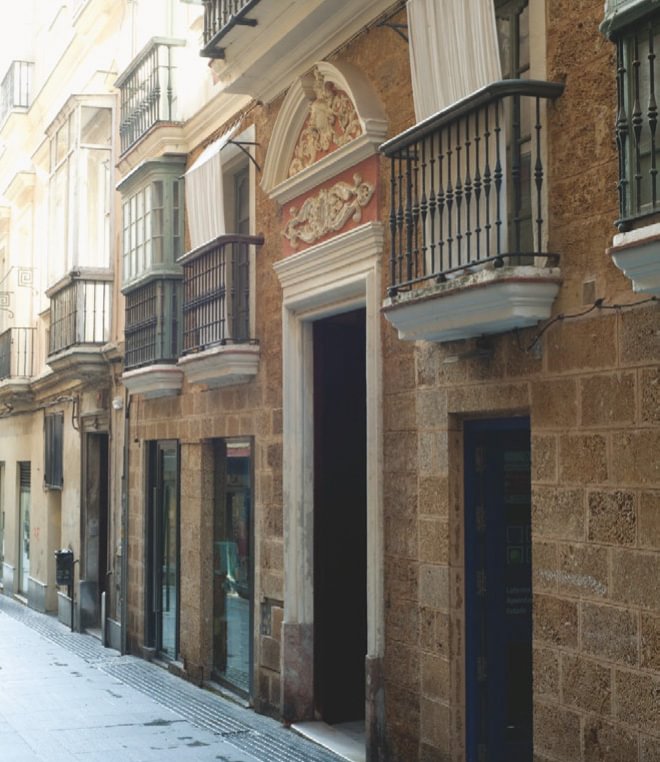 from the street there is very little to suggest the splendours that lie beyond La Bella Escondida’s front door. 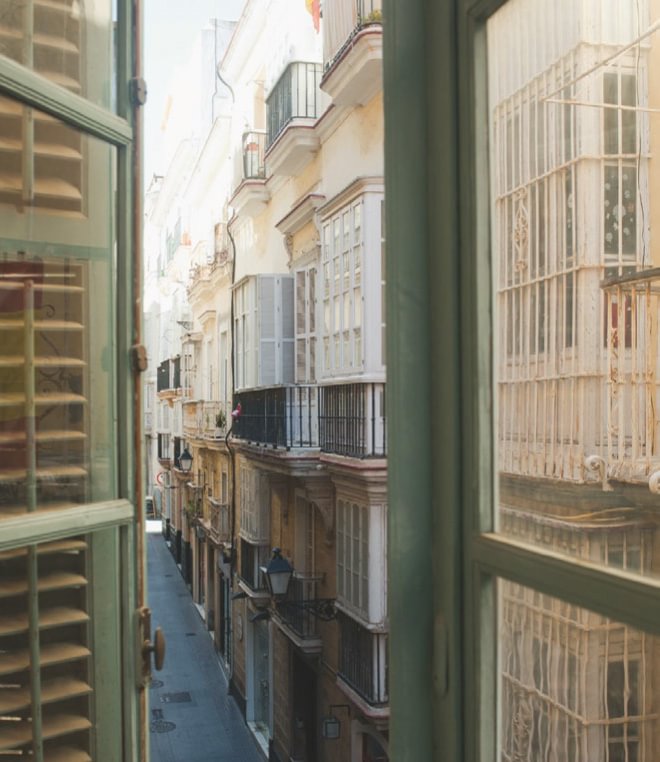 of Cádiz’s 126 surviving watchtowers, Manuel’s is the only octagonal one. Its paintwork mimics Moorish tiles The set of La Granja glasses on the dining-room table is complete – despite being more than 200 years old. Miraculously, the 19thcentury Staffordshire Imari service has also survived without a single piece being broken 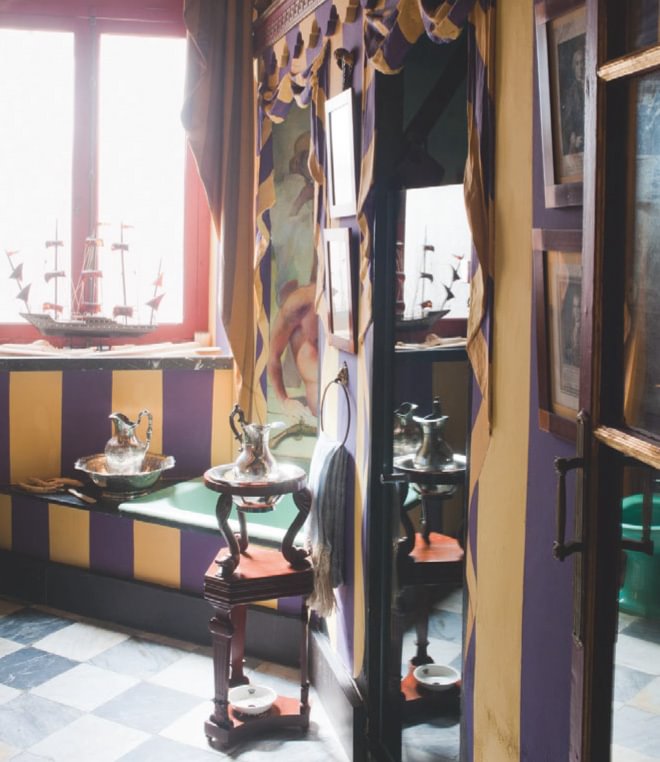 the bathroom resembles a campaign tent, albeit one with a mural of naked sailors. The wash bowls and jugs are Napoleonic.

IF STONES COULD speak then this merchant’s house in Cádiz would have volumes to say. It would tell of the great trade routes, of merchant ships unloading unimaginable riches from the Indies such as tobacco, silks, pearls, gold and silver, all to the plangent strains of flamenco and the heart-rending Pearl Fishers’ Duet. For the southern Spanish port is one of the oldest continuously inhabited cities in Europe, founded in c1100bc by the Phoenicians. Its golden age, however, was the 18th century, when most of the goods that the country traded with the Americas passed through its waters; by the 20th century veritable lakes of Jerez sherry were being shipped from here to Britain.

Dating from 1730, the mansion itself was built by actual, reallife pearl-fishers, who had a licence allowing them to harvest oysters in the Spanish colonies along the Atlantic and Caribbean coasts. Its current owner, flamboyant octogenarian Manuel Morales de Jódar, is a Spanish nobleman and something of a magpie with a discerning eye who delights in textiles and textures, religious artefacts, and artful arrangements of ornaments and ephemera. The history of his ancestors, like that of his home city, isn’t short on intrigue either. His mother’s family were wine exporters but fell foul of the Communists, who burned down all their properties in Andalusia during the Spanish civil war. ‘My father was the olive-oil consul in America, selling green olives to the US governor,’ he says. ‘It gave us our cosmopolitan lifestyle, unheard of during Franco’s regime.’ Over the decades Manuel himself has amassed all kinds of collections, including one of immaculate carriages, which once a year get an outing at the Seville Fair when he receives Portuguese royalty.

He and Carlos Marañón de Arana, his civil partner, bought the house in the 1970s ‘in a coup de coeur’ and set about renovating the interiors, ripping out 1950s and 60s accretions and replacing them with antique doors and windows. A set designer, Manuel studied at the Accademia di Belle Arti in Venice (his thesis was on Visconti’s The Leopard) and went on to work for La Fenice and the Metropolitan Opera House. That set designer’s appreciation of a good mise en scène has never left him when renovating and furnishing historic houses, including El Palacio de San Benito (WoI Jan 2016) and this, La Bella Escondida (‘the Hidden Beauty’).

The name refers to its imposing three-tiered tower (complete with weather vane and a sundial), which is impossible to see from the street. Old Cádiz boasts 126 of these lookouts in total, mostly whitewashed and all commanding views of the port, allowing captains to see when their ships had come in; each would have had its own flag so that crews could identify them from afar. According to Manuel, there is a melancholy story attached to his tower, which has a painted faux-ceramic façade and is unique for being octagonal rather than square. It was erected, he says, when the granddaughter of the pêcheur of pearls married a nobleman. ‘One of their daughters was a nun at the monastery next door and her father, the marquess, built this mysterious, enigmatic tower symbolising the winds to remind her of her family of origin.’

You find La Bella Escondida on a street in the old quarter of Cádiz, down narrow labyrinthine lanes that Laurie Lee likened to a Levantine ghetto. The entrance is relatively unremarkable except perhaps for a knocker in the shape of Fatima’s hands clasping apples that greets visitors; certainly it is modest when compared with the scale and grandeur of what awaits the visitor inside. Once over the threshold, you enter a courtyard flanked with sarcophagus baths, with walls of peeling stucco, and real and trompe-l’oeil urns in niches. An imperial staircase at one end ascends to the first floor and a glazed gallery, where a suite of rooms leads off a passageway.

The style throughout is predominantly Genoese – Rococo in essence and more elegant and delicate than heavy Baroque – thanks, in part, to an influx of merchants from that Italian port in the 16th century. Andalusian and Empire touches have been added here and there, and a soupçon of Isabella II’s Romantic look. It is a subtle fusion of influences. Look closely and you will see that the house is a hymn to the shell, with porcelain coquilles abounding in the form of mirror frames, lamp bases, ornamental obelisks and faux-coral candelabra by the Italian ceramicist Rita del Pra. The palette, meanwhile, owes much to a Mark Rothko work owned by the late Frédéric Castet, who was a friend of the owner as well as being Dior’s fur designer. ‘The Rothko painting in Frédéric’s house in Paris inspired my colours, which I mixed specially: aubergine, a little bit of strawberry, blue marine and apple green,’ says Manuel munificently. ‘The dining room is painted in the colours of the Brazilian flag in honour of a Brazilian friend.’

The drawing room has six french windows with studded Andalusian shutters and heavy rich-green velvet curtains crowned with gilded Rococo pelmets. A pair of Murano chandeliers emphasises the height of the room. One can imagine Lord Byron being received here in 1809 soon after having embarked on his first grand tour, a euphemism for his licentious exploits chasing after ‘the finest women in Spain, the Cádiz Belles’, as he wrote in a letter to his mother. If the drawing room is Byronic then the atmosphere of the bedroom is pure Stendhal. Painted a restrained sombre green with gilded friezes of laurel leaves, it features an Empire bed that was once occupied by the French naval officer Pierre-Charles Villeneuve, who was on the losing side in the Battle of Trafalgar. The craven Ferdinand VII then gave it to another admiral, Nuncias, who lived here at one time.

That small detail somehow sums up La Bella Escondida, a house that is freighted with history and where the past haunts the present. Successive owners have made their mark here over the years, and the frescoes, trompe l’oeil and ceramics added by contemporary master craftsmen and artists are but another layer in this exquisite centuries-old palimpsest of taste