VegInDepth
BRAZIL THE NEXT GREAT VEGAN NATION?
Known for its stunning tropical rainforest, colorful festivals, world-class soccer, and pristine beaches, the rapidly growing nation of Brazil is gaining notoriety for a more troubling reason: an obsession with meat. But even in the face of societal turmoil, political corruption, and an unsustainable food system, a quiet but powerful plant-based revolution bubbles beneath the surface. Rachel Krantz and Bruna Tomasuolo uncover why this country of 209 million is poised to lead Latin America into a meat-free tomorrow.

PLANT-BASED LIVING is swiftly gaining popularity all around the world—but looking at Brazil, you wouldn’t know it. The South American country is the world’s second-largest beef producer, second-largest chicken producer, third-largest pork producer, and fifth-highest meat consumer. Brazil is also home to two of the five top meat producers on the planet. Meat consumption in the planet’s fifth most-populous country has exploded, almost doubling since 1990 to nearly 220 pounds per person each year.

Meanwhile, Brazil’s radically conservative new president, Jair Bolsonaro, has been outspoken in his anti-environmental stance, promising to roll back protections of the Amazon rainforest and implement unprecedented monitoring of non-profit organizations. Mere hours after Bolsonaro took office, he transferred regulation of indigenous rainforest reserves to the Ministry of Agriculture, which (not unlike the USDA in the United States) is heavily influenced by agribusiness lobbying dollars.

Yet the country boasts progressive food policies. Several cities have implemented Meatless Monday programs, and the Ministry of Health’s Dietary Guidelines for the Brazilian Population has recommended a lowered consumption of animal products, as well as an emphasis on reducing processed foods, encouraging people to opt for whole foods cooked at home. Meanwhile, interest in veganism is only growing; according to a recent survey, a whopping 14 percent of Brazilians identify as vegetarian—a 75-percent rise since 2012. And a recent study indicated nearly 60 million Brazilians are actively reducing their consumption of animal products. 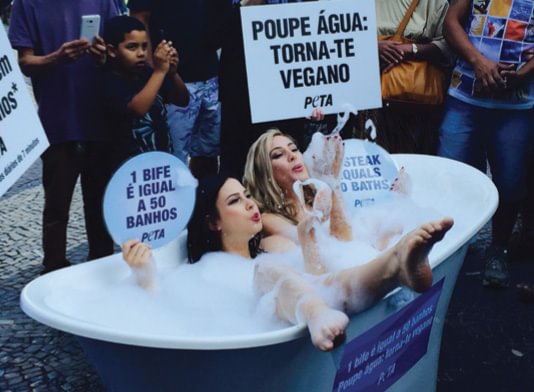 Look a little closer, and these apparent contradictions make perfect sense. Brazil seemingly has it all—plentiful natural resources, rich racial diversity, and a rapidly growing population—but it is also, perhaps, the one country with the most to gain and lose from ending its use of animals for food.

Brazil exports so much meat largely because of its abundance of land on which it can confine animals; the country contains the world’s most vast rainforest, and 91 percent of its deforested land is used for cattle ranching alone. But the planet needs its rainforests to absorb greenhouse gasses and help stave off climate change. “The world should keep an eye on Brazil,” cautioned Paula Cardoso, one of the country's leading animal-rights lawyers. “If we don’t deal with animal protection here, we’re attacking the planet’s lungs.”

As is the case around the world, environmental activists in Brazil didn’t always align themselves with the vegan movement. They advocated moving cattle out of rainforests but hesitated to call on consumers to reduce meat consumption. But increasingly, the world can’t ignore the connection between diet and the environment, especially after the United Nations itself declared that reducing or reversing current global warming trends “would only be possible with a substantial worldwide diet change away from animal products.” The UN cited increased carbon emissions, deforestation, burning fossil fuels, and water wastage—just a few of animal agriculture’s devastating impacts.

International environmental protection group Greenpeace launched a worldwide campaign in 2018 stating that a 50-percent reduction in production and consumption of animal products is needed to decelerate the biodiversity loss, global warming, and rising rates of chronic disease associated with our current consumption habits.

The connection between eating animals and poor public health is also increasingly evident in Brazil. Twenty percent of Brazilians are obese, eight percent have diabetes, half are overweight, and more than 50 million people—nearly a quarter of Brazil’s population—live below the poverty line. “When you look at how people eat and the kind of diseases that people have,” Cardoso says, “you can easily see how veganism can help our country.”

As in the United States, powerful financial interests are at play, working to prevent a shift away from meat toward plants. The conservative political group Bancada Ruralista wields an extraordinary amount of influence thanks in part to its defense of the interests of rural landowners and ties to agricultural sectors. Indeed, some of the most powerful meat companies are also some of the biggest sponsors of the country’s political parties—the Parliamentary Agricultural Front (the agribusiness lobby) is deeply entangled in the nation’s congress, whose members occupy a third of the Chamber of Deputies and a quarter of the Senate. Indeed, the political outlook in Brazil can appear bleak, but, fortunately, there is a growing number of activists on the ground combating these influences. 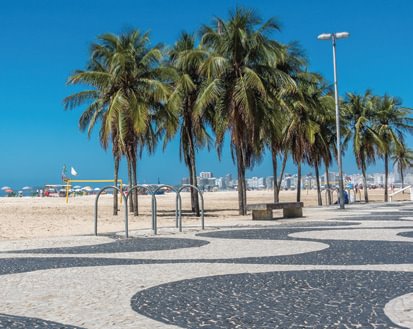 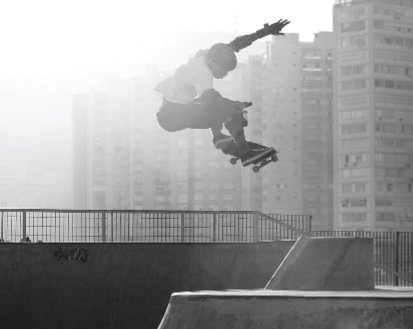 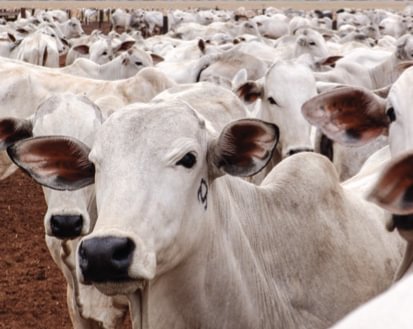 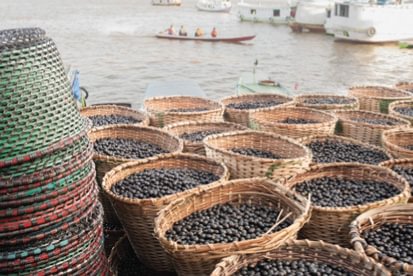 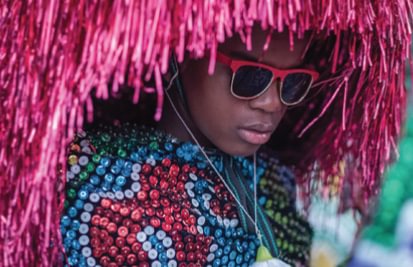 When he went vegetarian in high school, Lucas Alvarenga, now Senior Vice President of International Programs at Mercy For Animals, didn’t know anyone abstaining from meat. “My friends said, ‘That’s not going to last a week. That’s not something for men.’” Eighteen years later, things in Brazil are vastly different. In São Paulo, the country’s most populous city, Alvarenga can go out for vegan pizza and even eat veganized versions of traditional Brazilian dishes, such as feijoada, a stew typically made with pork, beef, and sausage. He says that now, friends, loved ones, and even casual passersby express interest in eating less meat themselves.

But beyond one man’s story, signs all point to a plant-based revolution. Proponents cite Brazil’s openness as a major reason for its receptiveness to veganism. “The reality about Brazilians is that people here are very open to change, are very flexible, and are very eager to learn new things,” says Vivian Mocellin, Animal Equality’s executive director in Brazil. The international organization recently opened an office in Brazil, and Mocellin noted that the country is the perfect place for progress. “The culture is constantly evolving. I think people are very open to understanding veganism as a social justice movement. And I think there is a new generation of Brazilians very eager to change the culture."

As is often the case, young people and social media seem to be leading the charge. Brazilians are the third-largest Facebook user-base in the world (after India and the US) and spend more time online than people in any other country. So celebrities like pop star Anitta—who recently proclaimed herself vegan and told her 38 million Instagram followers to watch Cowspiracy—have a powerful impact. Veganism has reached the small screen, too. Writer and activist Alana Rox’s vegan cooking show, Diary of a Vegan is the first of its kind in Latin America, and her cookbook of the same name is a bestseller in Brazil.

But it’s not just the young and Facebook-obsessed who are changing. “My 60-year-old aunt sent me a message last week and told me she’s trying to go vegan,” Cardoso says. “That’s something that I would never have dreamed of happening 15 years ago.”

The progress doesn’t stop there. The Vegetarian Society of Brazil—a nonprofit that promotes vegetarian food through campaigns and events—has operated for 16 years and launched the world’s largest Meatless Monday campaign (providing 67 million vegetarian meals in 2018 alone); started an annual vegetarian food festival; and even created an official vegan label in 2013 that certifies food, cosmetics, and clothing as vegan.

There are also tremendous opportunities for change through legislation. Brazil’s federal constitution expressly prohibits cruelty to animals, and one law even imposes criminal liability on environmental crimes, including animal abuse. Efforts to create ballot initiatives like the ones that have banned cages for farmed animals in the US are met by constitutional barriers, but Cardoso noted that activists can use other tactics. For example, they can push for passage of animal-welfare standards, a legal definition of “cage-free,” enforceable regulation of the cage-free egg label, and a live export ban to spare animals the harrowing and excruciating trips to slaughter overseas.

“The culture is constantly evolving. I think people are very open to understanding veganism as a social justice movement.”

It’s important to note that vegan products are much more accessible in big cities like São Paulo than in rural areas, where a staple like dairy-free milk may be difficult to find. “You have places just an hour or two outside the city where there is no information regarding veganism or healthy foods,” Mocellin said. “We don’t have just one identity in the country; we have many different identities, so we have to talk to the people from those different communities.” 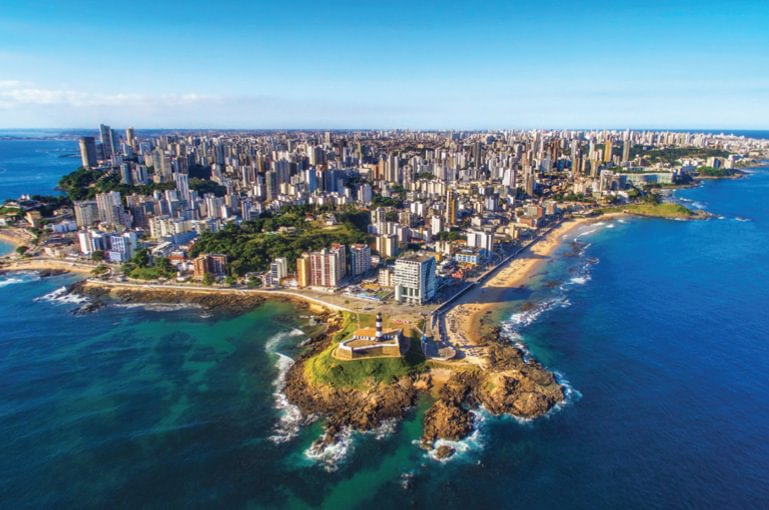 While meat consumption and production are on the rise in Brazil, there’s hope that they will flatten and begin to fall. Sixty million Brazilians currently purchase vegetarian products, and citizens poll higher-than-average concern about animal welfare. Also, skepticism of the meat industry itself is growing, thanks to scandals like the one that recently led to the arrests of meat industry executives for purposefully changing the expiration dates on meat products.

The future of plant-based meat and cultured meat—real meat made from animal cells without the need for slaughter—is also promising. While many plant-based products are still much more expensive in Brazil than in the US, Gustavo Guadagnini, managing director for The Good Food Institute in Brazil—an international nonprofit that supports companies producing plant-based and cultured versions of animal products—says investors in the country are enthusiastic about funding these slaughter-free innovations.

Less money is available in the country for research, but Brazil can rely on technologies developed in other countries. Once these products are on the market and price-competitive, Guadagnini is confident Brazilians will buy them. In fact, a new vegan egg and the Futuro Burger—a plant-based patty said to be on par with the Beyond Burger—both recently debuted in the country.

The Good Food Institute shows companies that the emerging slaughter-free market poses an opportunity, not a threat. And corporations are hinting at early signs of agreement. This year, Nestlé invested in Brazilian vegan cheese company NoMoo, and in 2017, Unilever acquired the largely vegan snack and goods company Mãe Terra.

“As a culture, we’re also very open to health trends,” Guadagnini explained. “We have more openness to knowing new products and solutions. So there is nothing in Brazilian consumer habits that would say that we wouldn’t change the same way that the rest of the world is changing or that we wouldn’t catch up to what’s happening. It’s just the opposite.”

While non-profit organizations are cautiously watching Brazil’s new president, for now they are hopeful that their work will continue to see the rapid success of the past five years. “I think that Brazil is going to be leading the movement for plant-based foods and for public policies, and I think we’re going to see a lot of examples on how to take veganism to the next level,” says Mocellin. “If Brazil changes, we can really push the rest of the continent to change together.”

BRAZIL by the Numbers

The population of Brazil

The percentage of Brazilians who identify as vegetarian

The annual growth rate of the vegan market in Brazil

Rachel Krantz (@rachelkrantz) is a senior writer at Mercy For Animals and a founding editor of Bustle.

Bruna Tomasuolo is Director of Communications at Mercy For Animals Brazil. ■