VList
Happily ever after
Formerly Italy’s city of shame, the southern outcrop of Matera is now reborn as a European capital of culture for 2019.
By Lee Tulloch
Photographed by Lea Anouchinsky 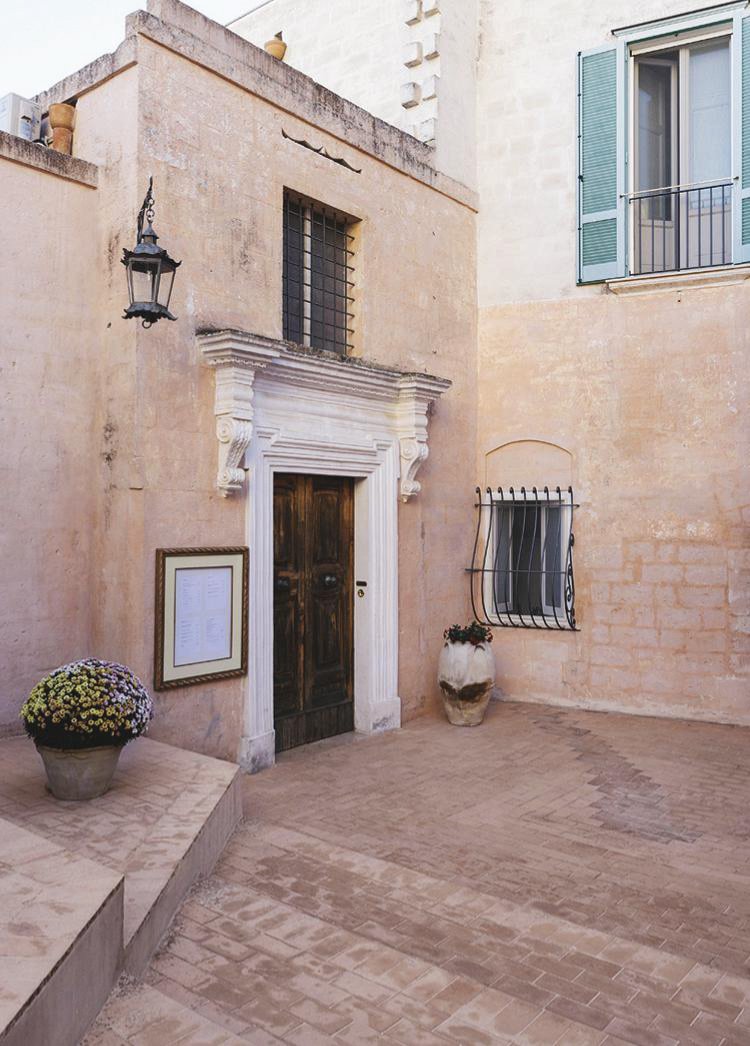 Housed in a restored 18th-century palace and furnished in contemporary style with Vitra chairs and Moooi tables, Dimora Ulmo features a menu curated by Michele Castelli and Virginia Caravita, both chefs who have worked with Massimo Bottura. Ulmo’s dishes draw on ingredients strictly sourced from surrounding farms and based on the region’s rustic traditions. Crapiata with Codfish is a reimagining of Matera’s most famous dish, a hearty stew of chickpeas, lentils and potatoes. dimoraulmo.it

Matera rises up on both sides of a deep ravine, its houses carved out of pale limestone, one piled on top of the other, forming a dazzling beehive of humanity. Known as the ‘City of Stones’, Matera was one of Italy’s first settlements, said to be the third-oldest continually inhabited city in the world, and its layers reveal Palaeolithic, Gothic, Byzantine, Saracen, Norman and Aragonese civilisations, as well as a number of spectacular rupestrian churches from as early as the 8th century AD.

Yet for centuries, Matera was shunned by the rest of Italy — shamed by the abject poverty of its inhabitants, most of whom led a taxing agricultural existence, crowded into tiny cave-like dwellings with dozens of family members. In the 1950s, many of the residents were relocated to new housing developments outside the Sassi, or old part of the city, leaving the cave houses to fall further into ruin.

In 1993, UNESCO named the Sassi and the rupestrian churches of Matera as World Heritage sites, and the ensuing transformation has been astonishing. Matera has come back to life, home to a nouvelle vague of young, international creatives and their multitude of activities and startups.

It is a European capital of culture for 2019, an accolade that was unimaginable two decades ago. Matera’s ancient streetscapes have found fame in such movies as Pier Paolo Pasolini’s The Gospel According to St Matthew (1964), Mel Gibson’s The Passion of the Christ (2004), and Patty Jenkins’ Wonder Woman (2017). Tourists are now lured away from other southern Italian hotspots like neighbouring Puglia to climb Matera’s zigzagging stone staircases and visit its sprawling cave churches, a 13th-century cathedral and a castle that dates back to the 15th century, and explore the amazing network of cisterns that kept water flowing to this dry but breathtaking landscape. Enoteca Dai Tosi is set within a multi-level limestone cave.

Matera’s Museum of Contemporary Sculpture is located in the 16th-century Palazzo Pomarici and its six underground chambers, which were excavated out of the underlying tufo, or tuff stone. Locally known as the ‘One-hundred Room Palace’, the building was considered uninhabitable from the 1950s until 1992, when restoration work began. The palace features an astonishing rabbit warren of caves, grottoes and niches, and showcases the works of modern-era Italian and international sculptors, all of it donated by the artists themselves, their families, collectors and other galleries. musma.it

In 2013, Apulian sculptor Antonio Paradiso held an exhibition in an abandoned tufo quarry on the outskirts of Matera. The site was then turned into a permanent exhibition space for Paradiso’s sculptures, which include monumental works made out of the twisted metal of the World Trade Center scavenged after the September 11 attacks. Covering six hectares, the park forms a gigantic anthropological artwork itself. It’s open round the clock, entry is free, and it is one of the city’s most popular spots for a stroll. Contrada Pedale della Palomba, SS7, Matera at Musma, Guerriero (in foreground) and Narciso, both sculptures by Andrea Cascella. La Palomba sculpture park.

Situated on the highest point of the Sassi, with a dramatic terrace that overlooks the Gravina canyon, this romantic nine-room boutique hotel occupies a building that dates back to the 14th century. At that point, the palazzo was owned by one of the noble families who lived above the fray at the actual top of the town. Retaining much of the original architectural detail, including arched ceilings and tiled floors and incorporating many original cave rooms, the luxury hotel retains the spirit of austere Matera life in the rawness of its stone-hewed walls and surfaces. The Stone Age vibe is complemented by chandeliers, antique furniture and plenty of mod cons. Guests might be tempted by the suite with a heated pool and waterfall. Breakfast is taken in a cave room lit by lamps and candles. The hotel celebrates the work of local artisans in customised tours to workshops and artist studios in the Sassi. palazzodelducamatera.it 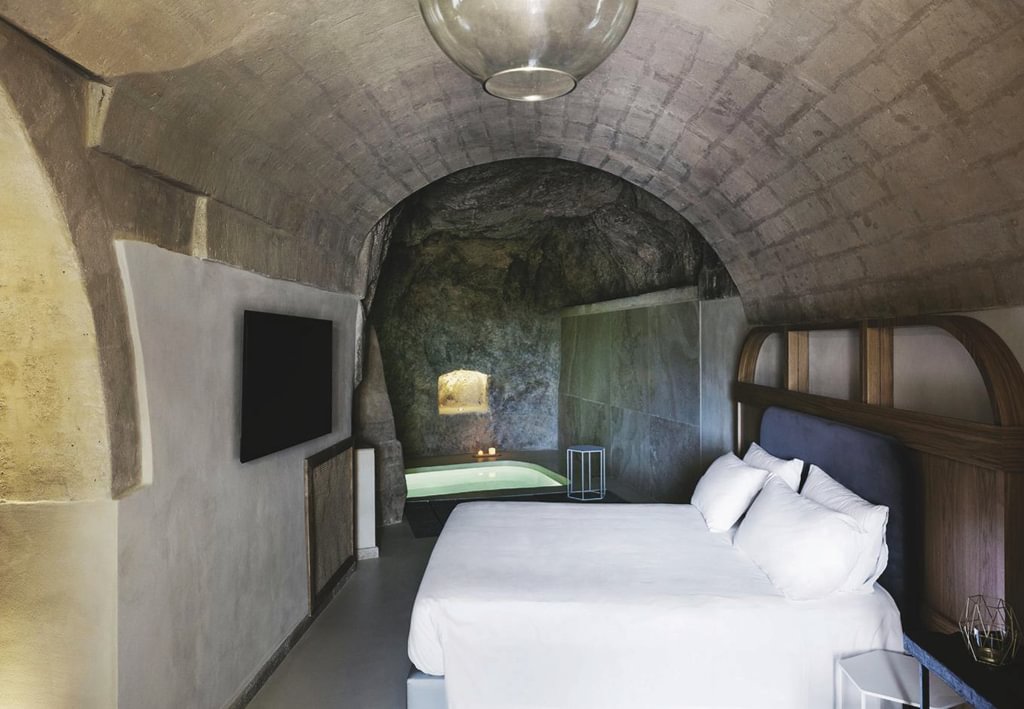 the Grottapignata suite of Palazzo del Duca with a hydromassage pool and waterfall.

Now one of the city’s grandest hotels, Palazzo Gattini has recently been restored by architect and editor-in-chief of AD Italia Ettore Mocchetti. Located in the very heart of the town’s historical centre, a few steps away from the Matera Cathedral, the former home of the noble Grattini family has 20 rooms and suites, each unique and constructed from local limestone, with carved arched ceilings, rich fabrics and furnishings created by local craftsmen. Suite 210 is the standout with its own private rooftop swimming pool. The hotel’s highlights are high and low — the rooftop terrace with its sensational panorama of the Sassi, and the Roman-style subterranean spa in the palace’s original cisterns and caves, with its heated pool and waterfall, and zero-gravity ‘floating pool’. palazzogattini.it 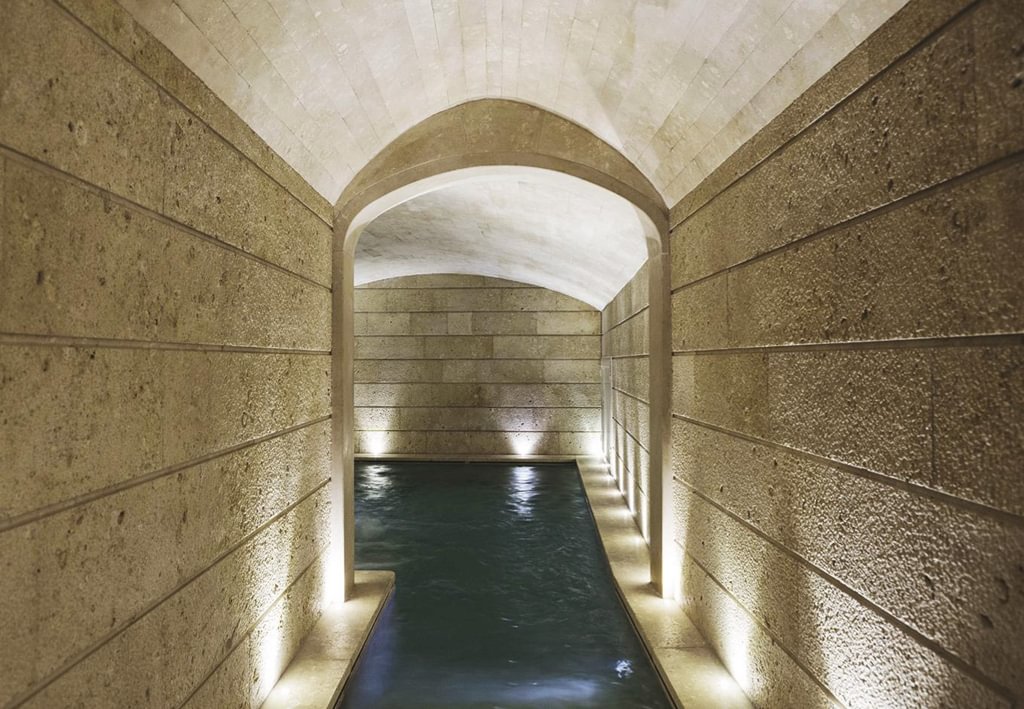 the spa at Palazzo Gattini. If the goal is to truly experience how locals lived in the City of Stones back in ancient times, Sextantio le Grotta della Civita is the place to get a taste. Carved within the Civita caves — the oldest part of the Sassi — the hotel’s 18 rooms have retained their original features, including vault-like ceilings, stone basins and century-old doors. Cripta della Civita, the old church, now serves as an atmospheric common area. sextantio.it ■