Feature
Om on the Road
HOW A VIOLA PLAYER FOR ADELE, PANIC! AT THE DISCO, AND ARIANA GRANDE BRINGS YOGA ON TOUR TO AVOID INJURY AND STAY ROOTED, BALANCED, AND CALM.
BY MICHELLE KONSTANTINOVSKY teaches yoga to her bandmates while touring with big acts such as Panic! at the Disco and Ariana Grande.

Late last July, a small group of yoga practitioners roamed the bustling hallways of Philadelphia’s Wells Fargo Center looking for a vacant room adequate for a quick asana practice. It was Friday after lunch, and the indoor arena was swarming with crew members feverishly unpacking, assembling, and rigging lighting and sound equipment for the night’s show. In a few hours, nearly 20,000 more people would flood the venue. But for the moment, these musicians just needed to find some peace and quiet.

By 8 p.m., this group of women—Kiara Ana Perico, Desiree Hazley, and Leah Metzler, also known to fans as the Wicked Strings—would swap their mats for musical instruments and take the stage as accompaniment for rock band Panic! at the Disco. For the seven months prior to this, the three classically trained musicians have been accompanying Panic!, led by frontman Brendon Urie, across the country (58 cities with a quick midway stint in the U.K. and Australia) on the Pray For The Wicked tour. But between all-night bus rides, triple-stacked bunk beds, constant time-zone shifts, endless soundchecks, and behind-the-scenes races to hit their stage marks, Perico, the group’s cofounder and resident violist, has taken it upon herself to guide her tour mates in mindful movement—even when that means taking up residence for an hour in the box of an empty 16-wheeler.

On this particular July day in Philadelphia, the trio had been looking for a room to practice yoga in when they passed a loading dock populated by a bunch of empty trucks. Along with a crew member and a tour friend, Kala MacDonald (wife of Panic!’s road manager, Zack Hall), the Wicked Strings piled into the back of a big rig and rolled out their mats. Perico lit a candle and some palo santo and invited the others to join her on their backs. She moved the group through supine leg stretches, Cat-Cows, hip openers, forward folds, and balancing poses, culminating in a juicy semi-trailer Savasana—the final bit of uninterrupted tranquility before an explosive two-hour stage performance.

Truck yoga—troga, as Perico has dubbed it—has become somewhat of a tour staple. Having spent the past five years jet-setting as a violist for major acts including Adele, Ariana Grande, Justin Bieber, David Foster, and now Panic!, the yoga teacher and longtime yoga student is accustomed to keeping an adaptable practice. “It's a daily adventure and exercise in flexibility—pun intended,” she says. On this tour alone, she’s practiced asana on stairway landings, in the tour bus, in her dressing room, in hallways, and hotel rooms.

“It’s inspiring to see how disciplined Kiara is while we’re on the road,” says tourmate and Wicked Strings cellist Metzler. “She’s definitely been a positive influence in my life here: Touring can be exhausting, and it would be much easier to mentally check out and watch Netflix, but she knows how much better we’ll feel after doing yoga.” Desiree Hazley, the Wicked Strings’ violinist, also credits yoga flows with improving mental and physical health through their hectic tour commitments: “When we practice, you can feel an uplifting shift toward calm and focus before our shows.”

Research suggests that for touring musicians, yoga is more than just a welcome moment of tranquility. Performers like Perico are at risk for a number of psychological and physical problems such as anxiety and performance-related musculoskeletal issues. String players specifically have been shown to develop work-related orthopedic disorders such as overuse syndrome and compressive neuropathy (think carpal tunnel syndrome) due to the necessary imbalance in posture.

To that effect, Kristen Queen, interim director of the School of Music at Texas Christian University and a yoga teacher, looks to resources like Mia Olson’s Musician’s Yoga: A Guide to Practice, Performance, and Inspiration to guide her Yoga for Musicians college course, a twice-weekly class that integrates breath and alignment to reduce stress on muscles and joints and help students bring awareness to form and function. “Practicing yoga bolsters balance within the body, supports full range of motion in the joints, strengthens the core to support the lower back, and generally helps us be mindful of our bodies when approaching our instruments,” she says.

“Many musicians play asymmetrical instruments, and their bodies adapt to that load in positive and negative ways,” says Seattle-based movement educator and professional classical musician, Kayleigh Miller. “Asana can reveal problems with asymmetry and provide tools to strengthen and mobilize imbalanced areas while enhancing awareness and understanding of the body. Most classical musicians deal with rigorous rehearsal, audition, and performance schedules, and down-regulating the nervous system through breath and mindful movements is essential for maintaining focus and clarity under pressure.” “MANY MUSICIANS PLAY ASYMMETRICAL INSTRUMENTS, AND THEIR BODIES ADAPT TO THAT LOAD IN POSITIVE AND NEGATIVE WAYS…”
- KAYLEIGH MILLER

I met Perico at New Orleans’ Smoothie King Center one bright and crisp February day, where the Panic! troupe had just rolled in after an all-night drive from an Austin show. It was the second leg of Panic!’s U.S. tour, and temperatures had dipped significantly since the tour kicked off, to say the least. In fact, New Orleans was one of the first cities Perico had seen in the past six weeks that hadn’t been rocked by a frigid “snowpocalypse.” But as a world-traveled performer, Perico is resilient—even in extreme conditions—and unwaveringly committed to her yoga practice.

With post-show bedtimes well after midnight, Perico typically salutes the sun around noon. She does a few morning stretches in her top bunk on the third level of the tour bus, hops down, and if her nine bus mates have already left for the venue, she sets up her mat in “the living room”—a deceptively spacious-sounding term for the compact front of the bus that can be extended by a few feet when parked. Since sleeping in the berth can be especially crampy for her sides and lower back, side extensions, hip-flexor stretches, and lower-back massages are a must, she says.

The day we meet in New Orleans, Perico tells me she's only had time for a 30-minute flow before greeting me at the venue. We stop for a snack on the bus and then head backstage. “Welcome to the venue!” she says, gesturing toward the mounting commotion as nearly a hundred crew members scurry about, producing an arena-sized spectacle out of thin air. We head straight to her dressing room, and as Perico repacks her suitcase, I wonder how bandmates Hazley and Metzler will possibly fit into the tiny room with us when they return from souvenir shopping.

Once the women return, we’re off to a quick soundcheck with Panic!’s other band members before an early dinner where we split vegan beignets (doughy and warm and way more delicious than they may sound) and then dash back to the venue. Because barricades and metal detectors are already set up and Panic! fans are swarming the arena, our driver drops us off at the front entrance. We navigate around giddy groups donning T-shirts of frontman Urie’s face, and race to the backstage entrance. No one notices us—in fact, none of the soon-to-be-shrieking fans even seem to realize they’ll be cheering and singing along to my companions in just under two hours. 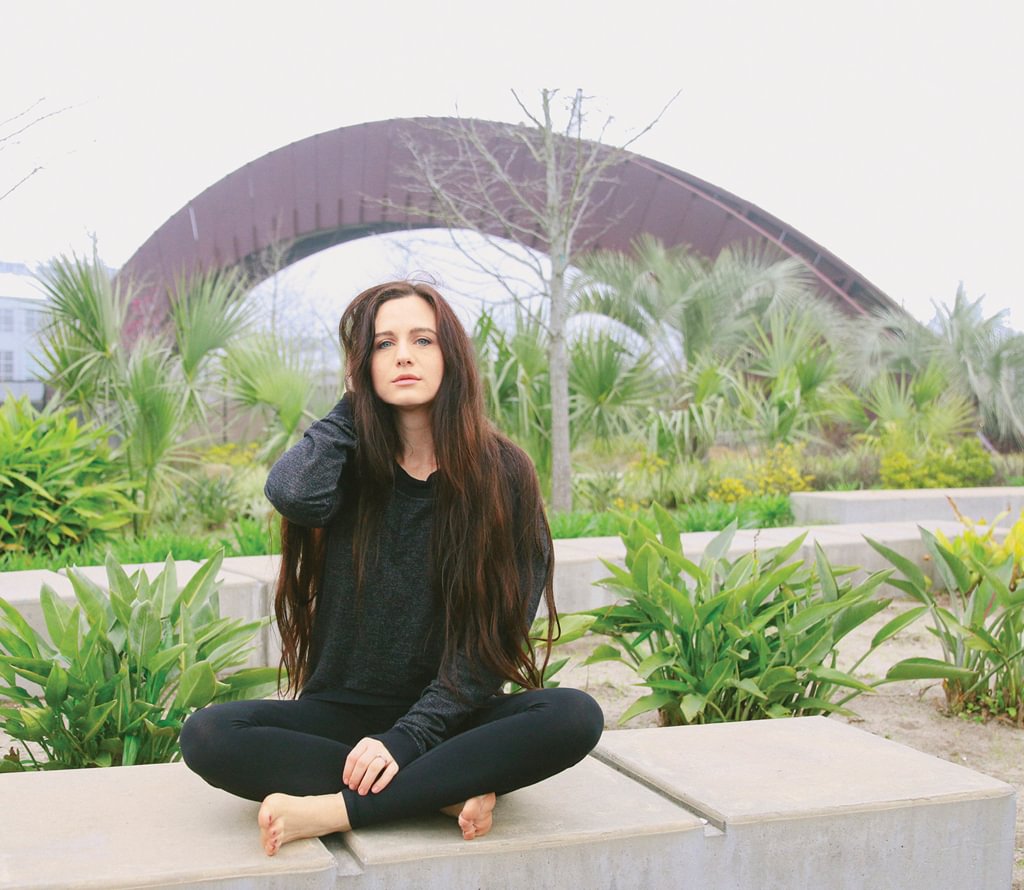 Growing up, mindfulness was a constant in the Perico household. Her father meditated for four hours each morning, prompting Perico to establish a regular yoga practice while studying viola performance at Boston University. Tendonitis from misaligned posturing throughout high school and the inevitable imbalance of playing an instrument exclusively on one side meant the young artist had to take extra precautions in college, she says. Knowing long-term injury had the potential to derail her burgeoning career, Perico took to serious self-care. Acupuncture, massages, physical therapy, and yoga “helped me focus my mind, move my body, and return to safe alignment,” she says. Between four-hour viola sessions, Perico stretched and inverted her way toward better circulation in her upper body and strength in her wrists and shoulders.

“Playing music at an elite level requires sophisticated functioning of the physical and psychological systems of the body,” says Bronwen Ackermann, PhD, a musicians' physiotherapist, musculoskeletal anatomist, and health researcher at Sydney Medical School. Ackermann has worked on numerous studies that demonstrate the injury prevention benefits of physical activities such as yoga for musicians. One such study, a 2012 article published in the journal Injury Prevention, found that strengthening and stabilizing areas of the body, such as the neck, shoulders, spine, abdominals, and hips, may reduces occupational injuries in professional orchestral musicians.

As yoga gradually helped Perico relearn healthier posturing to protect from future damage, the practice also unleashed undeniable psychological and spiritual repercussions. She says her practice is what has supported and sustained her through the past decade’s extreme highs (playing sold-out arenas) and devastating lows (unexpectedly losing her father last year). “I really had to work on finding a sense of home within myself,” she says. “I think once I figured that out, I was more prone to being at peace in my everyday life.” Perico moved to Los Angeles in 2012 to try and make it big in an infamously unforgiving industry. Almost immediately, the hustle and always-in-the-car culture began to take its toll. “I felt terrible,” she says. Once again, yoga helped her find her way. “I started practicing every morning at Runyon Canyon Park,” she says. “That really pulled me into grounding, and I immediately started meeting really beautiful, like-minded, soulful people.”

Once she laid down roots, her career soared, starting with an overseas opportunity that led to one international tour after another. “Producers who told me it takes a few years to get settled in LA were totally right,” she says. In 2014, she met Hazley, Metzler, and violinist Molly Rogers when they accompanied Japanese rock star Yoshiki on an international tour. The foursome went on to form the orchestral-pop troupe Orchid Quartet, performing alongside recording artists like Morgxn (Rogers has been working on other projects while the others perform as The Wicked Strings, but they reunite as their schedules allow). In 2015, Perico accompanied Ariana Grande on the Honeymoon Tour, and in 2016, Adele came calling. Through all of it, Perico has kept a strong yoga practice, building on it and thinking about yoga teacher training. In October 2017, before the Panic! tour kicked off, Perico completed her 200-hour teaching certification at YogaWorks in Santa Monica, California. Today, when she’s not touring with some of the industry’s biggest acts, she teaches studio and private classes.

After Panic! wraps its European tour, Perico will head to Bali to complete her 500-hour training and hopes to one day offer workshops to fellow musicians—she knows firsthand how much havoc the postures of professional playing can wreak. It’s hard to imagine when she’ll find time to add “workshop leader” to her list of credentials, but for now, she’ll continue prioritizing her practice—even if it’s a little hard to predict where her journey will take her or how much time she’ll have to herself along the way. “Meditation, yoga, and the cultivation of inner peace are absolutely the reasons I'm not spinning out all the time from the chaos around me,” she says. “Of course I get homesick, feel lost, and lose my sense of grounding, but the ability to reign it all back into reality and my inner sense of home has made all the difference.”