INSIDE EVERY MONTH
/ HUB THE RANKING
TOP FIVE HILL CLIMBS OF GREAT BRITAIN
Every issue, Cycling Plus writers take a subject and debate their all-time top five. This month, we gaze skywards and muse over some of our favourite British hill climbs… 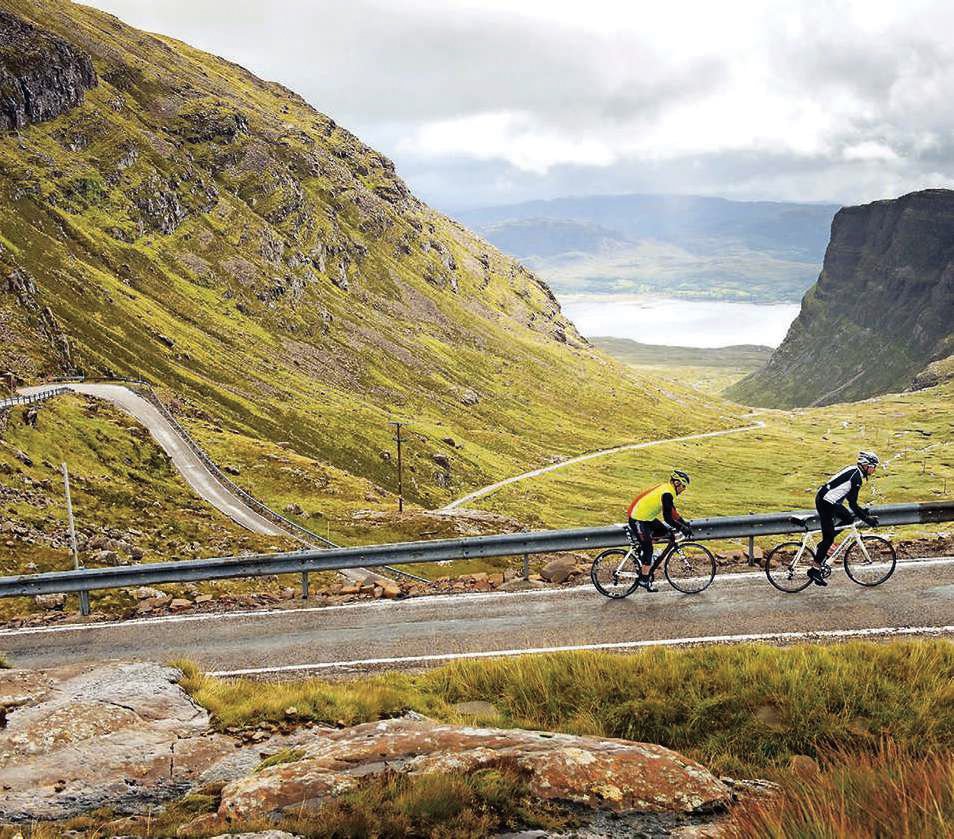 Belach na Ba in the Western Highlands: one of the UK’s most fearsome climbs (PHOTO ANDY MCCANDLISH)

JOHN WHITNEY: Can British climbs ever be considered, for want of a better word, sexy?

SIMON WARREN: Of course they can. There are hairpin bends in Britain that sweep every bit as gloriously as anything in the Alps. British climbs often stand alone, with a single defining feature, whether a perfect corner or patch of vicious gradient - such as the 33 per cent stretch on Rosedale Chimney or the first hairpin on Park Rash - that adds a vital touch of colour and creates a focal point for a day’s adventure.

TREVOR WARD: I think they can, but they’re generally a different beast than what you find in the Alps. They call for a different kind of mental fortitude. Instead of concealing themselves behind beautifully engineered switchbacks, British climbs taunt you by heading straight up into the mist and drizzle, saying, ‘Come and have a go if you think you’re hard enough.’ Anyone can ride up Alpe d’Huez - its gradients are so perfectly engineered that they’re like choux pastry compared to the meat and two veg of a British climb, such as The Lecht in Scotland’s Cairngorms, which drags on seemingly forever in a straight line.

JOHN: The first-ever big climb I cycled up, the Trough of Bowland from Dunsop Bridge, is a bit like that. And I know what Simon means when he talks about climbs being a focal point of a ride - I remember the riders I was with portentously building up the savagery of the Trough as the ride went on. I was nervously and repeatedly asking questions about it, to try to get the measure of it. I didn’t quite succeed that first time, and though I’ve ridden it countless times since, my mind always wanders to that day.

SIMON: One of my favourite climbs allows me to empty my mind, press the reset button and get away from the real world for a moment. Newlands Pass in the Lake District - 1.88km of heaven on a stretch of tarmac that’s the only visible sign of human activity in an ocean of nature. It’s this uncluttered simplicity that draws me back time and time again. That, and the final 25 per cent killer bend that has me breathing out of my ears.

TREVOR: My favourite climbs are the ones off the beaten track. I don’t want loads of vehicles close-passing me as I winch myself up a double-digit gradient. Take Bealach na Bà in the Western Highlands. It offers views of distant islands and mountains before delivering you to a couple of hairpins that wouldn’t disgrace an Alpine pass. It links two villages, Applecross and Tornapress, so other than the local postie, the traffic is mainly tourists, most of whom are caught out by the steep, narrow road and spend their time parked up and confused in passing places. But if you choose your day wisely, you’ll have all 8km from sea level to 623m largely to yourself. The descent to Applecross is just as spectacular.

JOHN: That’s the second Scottish climb mentioned. We could probably fill this page with them.

SIMON: Lowther Hill is another, in the Southern Uplands. When combined with Mennock Pass, which leads up to its base, there’s 15km of climbing to be had here - two more than Alpe d’Huez! The views from the top are every bit as spectacular, too. The last 4km to the summit is wickedly hard as the road heads up in search of the summit plateau, marked by its giant radar dome.

TREVOR: My second favourite climb, Great Dun Fell, goes to 848m - the highest paved road in the UK. It’s on the other side of the M6 to the Lake District and north of the Yorkshire Dales, so is relatively untroubled by tourists. It’s a tough climb with a long, straight section in the middle that can suck the soul out of you if you’re not mentally prepared. As a bonus, the final mile is closed to motorised traffic. It means you have to hoist your bike over a locked gate, but it’s a small price to pay to have the summit to yourself (apart from the odd rambler). If it was abroad, you’d be fighting off hordes of motorcyclists to get a picture in front of the altitude sign.

JOHN: I can’t let this subject slide by without mentioning Hardknott Pass in the Lake District. Given how often I see it mentioned in ‘world’s hardest cycle climbs’ articles online, I’d wager it’s the best-known British climb to people who don’t live here, and I’m sure I’m not alone in saying that some of my darkest moments in cycling have come here.