Features
/ TRAVEL SPECIAL
/ Wine festivals
THE WORLD’S BEST WINE FESTIVALS
Wine festivals today are worth travelling for, as they can feature everything from lavish dinners cooked by celebrity chefs to Alpine skiing in top resorts. Fiona Beckett shares her pick of a full calendar of great wine celebrations around the world 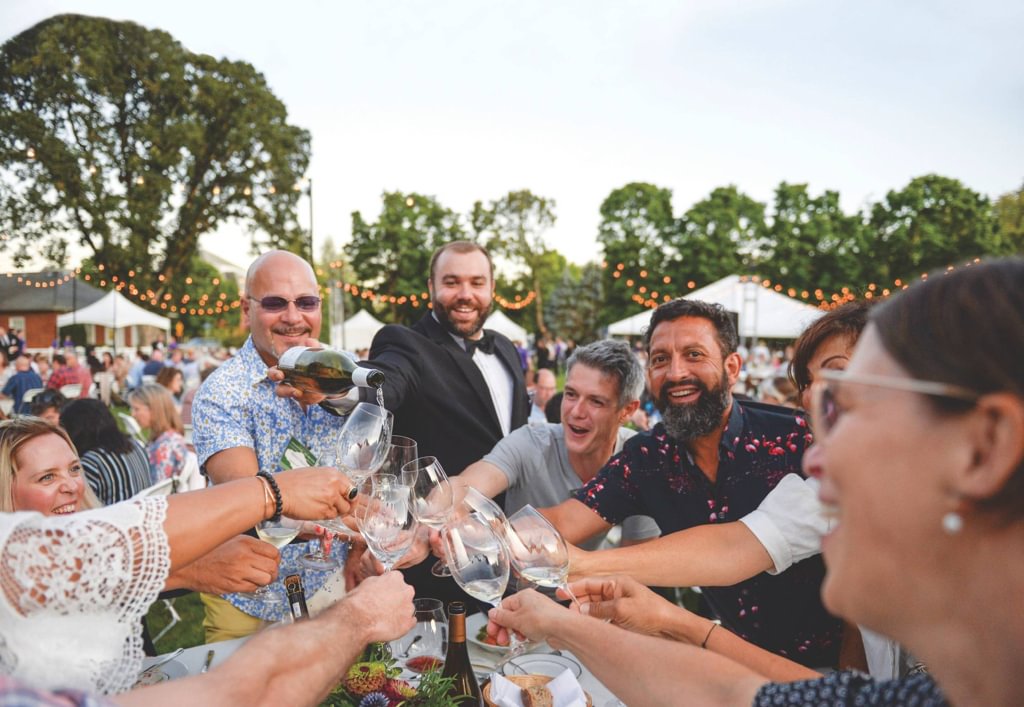 With a growing audience of wine lovers, wine festivals are big business these days. Almost every wine region hosts its own celebration. Often they are combined with food to create a grand gastronomic experience. Others, such as the annual Marciac jazz festival in France (see p65), combine wine with music.

Some are inspired by a single grape variety. Pinot Noir seems to be the most popular, with big Pinot celebrations in Oregon, Alsace and the Hemel-en-Aarde region of South Africa. Riesling also gets some attention, with the Riesling Rendezvous being held in Seattle every third year (2019’s event was postponed to 2020: see https://flxcursion.com/wp).

Not all wine events are huge. The annual (or near-annual) Fête du Vin in the tiny hamlet of Chassignolles in Auvergne only has about 10 stands manned by producers who appear on the local auberge’s wine list, but is an unmissable weekend of convivial feasting.

Some are quirky, like the Virginia Wine and Garlic Festival (motto ‘Eat, Drink, Stink’), or the Barrels & Beards festival in Bot River, South Africa, which sees winemakers from the region competing to grow the most luxuriant beard during harvest. In Catalonia there is a phylloxera festival, Festa de la Fil·loxera, where attendees come dressed as bugs.

But the rarest, most spectacular wine festival is in Vevey, Switzerland. The Fête des Vignerons takes place there once every 20 years, despite – or maybe because of – its huge popularity. More than 400,000 people attend, enjoying a lavish opening ceremony and wine-related performances alongside tastings. 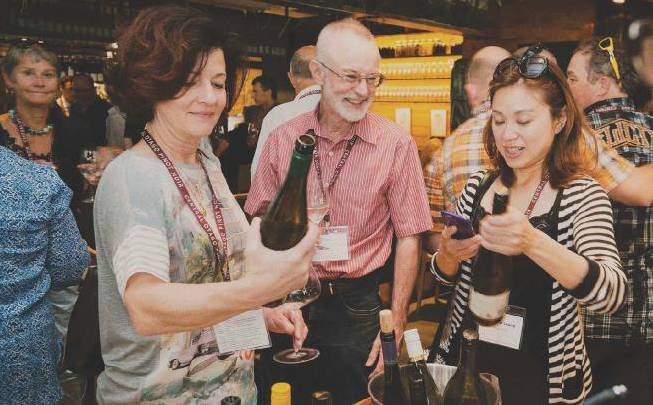 Sadly, the most recent Fête took place last year, which means you’ll have to wait until 2039 for the next. In the meantime, a trip to one of the following wine festivals can satisfy your urge to celebrate...

One of a number of world-class Pinot festivals (others include Hemel-en-Aarde and the International Pinot Noir Celebration in Oregon, see p65), this takes place in the dramatically beautiful setting of Queenstown on New Zealand’s South Island. There are tastings and masterclasses, one of which you arrive at via ‘gondola’ – a steep cable car ride that gives stunning views over Lake Wakatipu. There are also opportunities to visit wineries, including the adopted Aussie tradition of the ‘long lunch’. www.pinotcelebration.co.nz 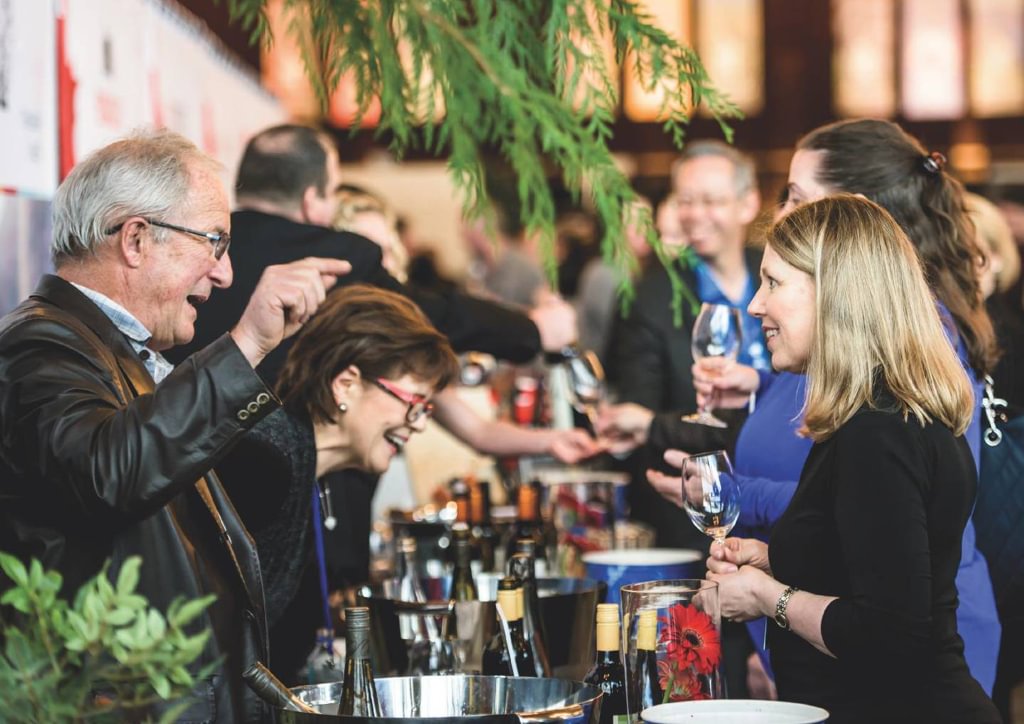 Billed as ‘Canada’s coolest wine festival’, this two-week-long celebration focuses on the region’s famous ice wines. The high point is the annual Icewine Gala dinner, which celebrates 25 years in 2020, but you can buy a ‘discovery pass’ and enjoy sweet and savoury food and wine pairings at participating wineries for the duration of the event. www.niagarawinefestival.com/icewine

With more than 25,000 admissions, the Vancouver International Wine Festival is not only Canada’s biggest wine event but the largest in the Americas, according to its organisers. Now in its 42nd year, it highlights wines from outside Canada; the focus for 2020 will be on France. The main event is the International Festival Tasting, but there’s also a big dinner and auction called the Bacchanalia Gala, as well as winery dinners and a Vintners Brunch. Many of the city’s top restaurants also put on their own tastings. www.vanwinefest.ca 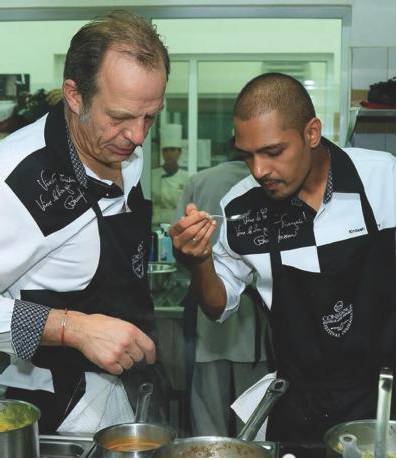 ‘Not all wine events are huge: the near-annual Fête du Vin in the tiny hamlet of Chassignolles, in Auvergne, only has about 10 stands...’

If you fancy some tropical heat with your wine, head to Mauritius for the annual Festival Culinaire, named after late French chef Bernard Loiseau. It features an impressive line-up of visiting chefs, as well as tastings, food and wine pairing sessions, masterclasses and wine dinners. Constance, the hotel group that hosts the festivities, also has some pretty impressive cellars in its estate – it holds another wine event in the autumn at the Constance Prince Maurice called La Paulée. www.constancehotels.com/en/events/ festivalculinaire-bernard-loiseau

The names that headline Australia’s biggest and best festival tend to be those of internationally renowned chefs and food writers, but there are plenty of top tastings and talks for wine lovers here too. Gastronomic events include ‘the world’s longest lunch’, which last year catered for 1,600 people (similar, slightly smaller lunches are held all over Victoria state). Melbourne is, of course, a great gastronomic destination in its own right, and it’s an excellent base for exploring the state’s wine regions, such as the Yarra Valley and Mornington Peninsula. www.melbournefoodandwine.com.au

Many in the wine trade scoffed when the Raw Wine fair launched in 2012, thinking that natural wine was a flash in the pan. However, founder Isabelle Legeron MW, author of Natural Wine (CICO Books, 2014), has taken the fair from strength to strength, and now hosts annual events in Los Angeles, Miami, New York, Montreal and Berlin too. There are strict criteria producers must fulfil in order to be included, based primarily on winemaking practices – and because most of the wineries are small, you get to meet many of the principals. Oh, and the food served on-site is invariably good too. www.rawwine.com 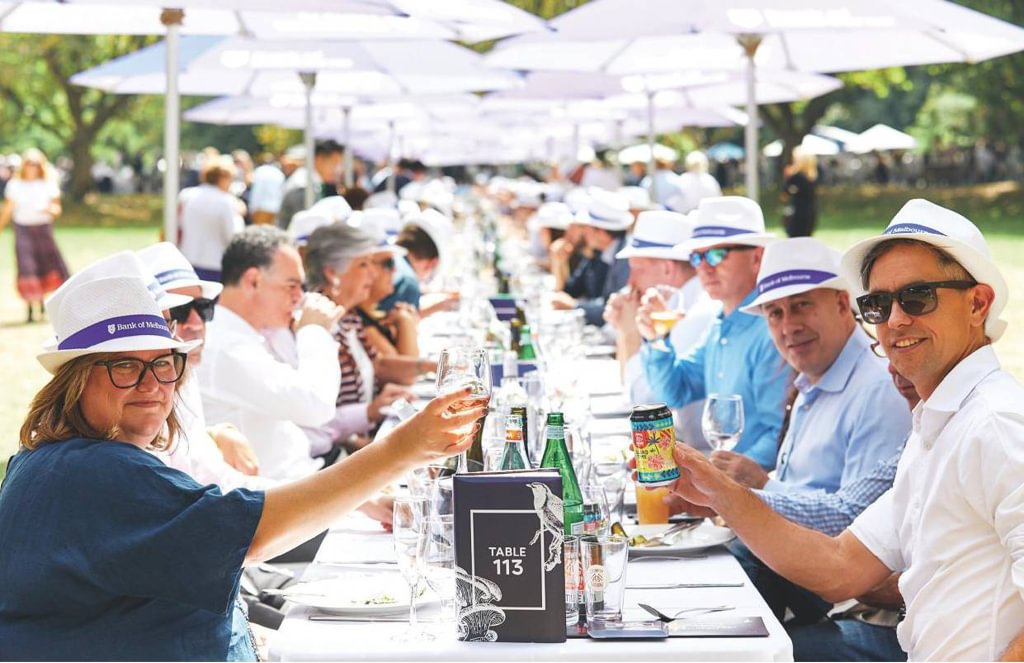 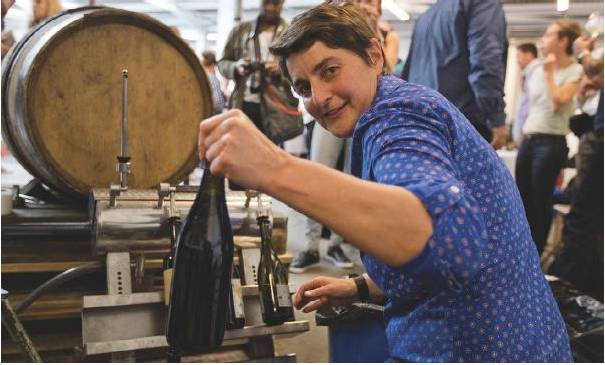 Not every festival offers wine and skiing, but Wein am Berg, hosted by the five-star Das Central Hotel in the Austrian ski resort of Sölden, does just that, with professional skiers on hand to help sharpen your technique. In the evening there are gourmet dinners, including one held in Europe’s highest restaurant, ice Q, which sits 3,048m above sea level – you might recognise it as the Hoffler Klinik in the James Bond film Spectre. There’s also a Big Bottle party on the Saturday night where wines from Austria and the Benelux countries are served in magnum. Perhaps it’s just as well there’s no skiing the following day... www.weinamberg.at

It may be called the Feria del Caballo, but given that it’s in Jerez, Andalucia, the 700-year-old event is as much about Sherry as it is horses. It takes place on the 52,000m² González Hontoria fairground, where all the horse riding and driving events are held, but there are parades through the streets as well. At night the horses make way for flamenco, and the fairground is lit by 1,360,000 lights – though goodness knows who counted them. You just stroll from one caseta (marquee) to another, drinking Sherry and grazing along the way. If you find the free-flowing fino too heady, know that the locals mix it with lemonade: a drink they call a rebujito. www.andalucia.com/festival/jerez-horse-fair. htm 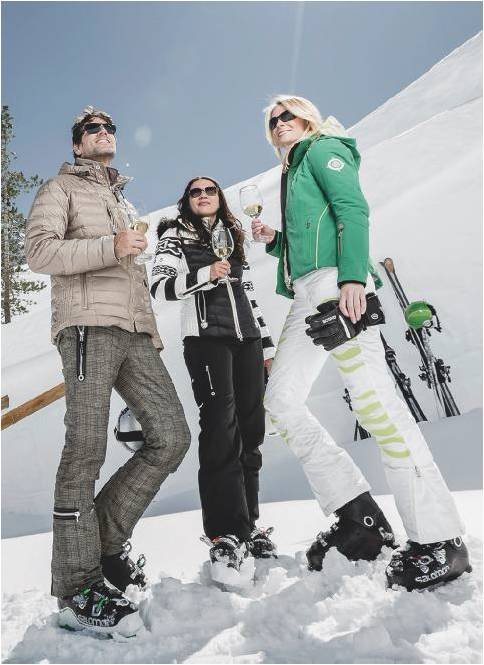 wine and skiing at Wein am Berg

Given the popularity of rosé, it’s surprising there aren’t more festivals devoted to it. This upmarket celebration, now in its seventh year, takes place in New York City and features a river cruise and tasting on the Hudson. There are other events, mainly poolside, at The Hamptons, Los Angeles and Miami. The dress code is pink, obviously. www.nuitrose.com

It seems appropriate that Prosecco should have its own festival – after all, it is a party drink. There’s no better place to enjoy it than among the rolling hills of the region, just an hour outside Venice. The festival takes place at the Castello di San Salvatore, built in the late 13th and early 14th centuries, and is limited to producers of top-level Prosecco from the Conegliano Valdobbiadene Superiore DOCG. It features tastings and wine pairings in associated restaurants. www.coneglianovaldobbiadenefestival.it 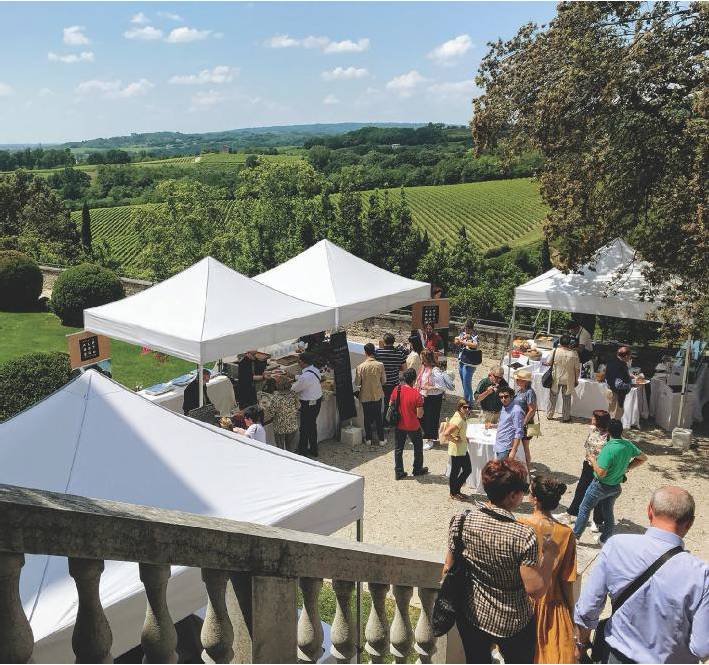 If crowds aren’t your thing and you want a festival that’s a real getaway, head for the Aeolian islands off the coast of Sicily to celebrate Malvasia Day. The event was set up by the Tasca d’Almerita family to bring together producers of the Aeolian islands – primarily Salina, but also Lipari and Vulcano – and presents an opportunity to discuss and taste this underappreciated grape variety. www.capofaro.it

Pinot Noir seems to inspire more festivals than any other grape variety, and the International Pinot Noir Celebration, now in its 34th year, is the daddy of them all. Held at Linfield College in McMinnville, Oregon, it features world-class Pinots from beyond its home turf (particularly from Burgundy). But its vibe – and its famous salmon bake event – is unmistakably of the Pacific Northwest. Some truly great bottles get handed around by collectors at the lavish open-air dinners, so bring along something special and don’t be shy about asking for a sip! www.ipnc.org 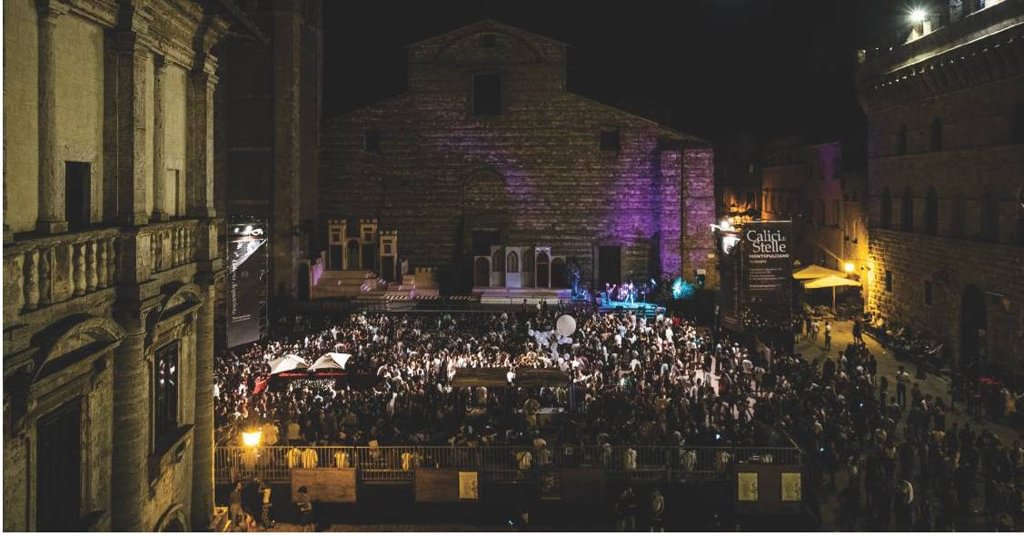 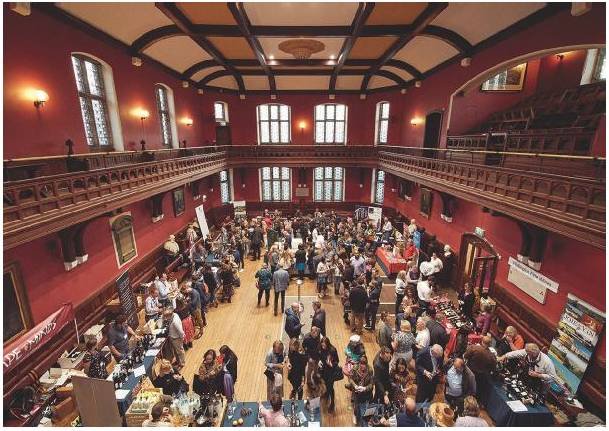 Yes, it’s a jazz festival – one of the best – but it’s impossible to divorce jazz from the wine that is normally at the heart of this tiny southwest French town, which has been improbably hosting the world-renowned event since 1978. Fill in the time between concerts (2019 featured performances from Chick Corea, Gilberto Gil and Sting) by exploring the exceptionally pretty surrounding countryside and getting your head round the obscure local grape varieties. It’s the perfect destination for a summer road trip. www.jazzinmarciac.co.uk

A celebration of wine spanning all of Italy that is organised by wine tourism non-profit Movimento Turismo del Vino and Città del Vino, the association of Italian winemaking cities. It is held on or around 10 August, known as the night of the shooting stars because the Perseid meteor shower takes place during this time. Each winemaking region hosts its own events in the days surrounding the meteor shower, but you’ll want to try and be there for the night itself to enjoy music, live performances and, of course, stargazing. www.calicidistelle.org

It may not be the most significant wine festival on the calendar, but its historic location in the Oxford Union makes it worth the trip to the studious English city. The Oxford Wine Festival features more than 40 merchants and producers, and tastings of wines from regions as varied as St-Emilion and Georgia (last year’s event included a talk called ‘The Weird and the Wonderful: The World’s Most Unusual Wines’). www.oxfordwinefestival.org

Just one of a number of wine harvest festivals around the world, the Sonoma County Harvest Fair has been going for 45 years. It has everything from a World Championship Grape Stomp, to professional and amateur wine competitions, to the usual tastings. It’s also a great excuse to explore this stunning part of California. www.harvestfair.org

If there’s one thing better than a wine festival, it’s a truffle festival in the heart of Italian wine country. Alba’s truffle festival, which runs from October to November, is the opportunity to buy truffles at a price you can afford – though you should take care to research the going price and, if possible, enlist the help of a knowledgeable local to help negotiate your purchases. There’s also a Wine Tasting Experience on Saturdays and Sundays during the festival, along with truffle dinners. www.fieradeltartufo.org

This is Western Australia’s answer to the Melbourne Food & Wine Festival, with a programme of similarly starry names from the food and wine world. Gourmet Escape takes place in the Swan Valley, Perth and Margaret River during Australia’s spring. Wine is at its heart, with top-end wineries of the regions hosting spectacular chef dinners and other events – which last year included a two-day Gourmet Village at Leeuwin Estate. www.gourmetescape.com.au 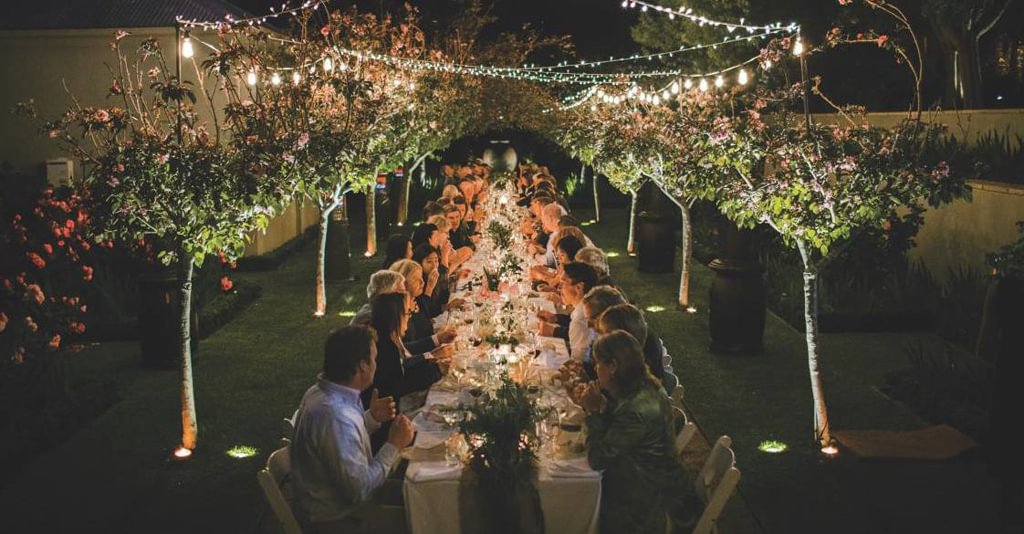 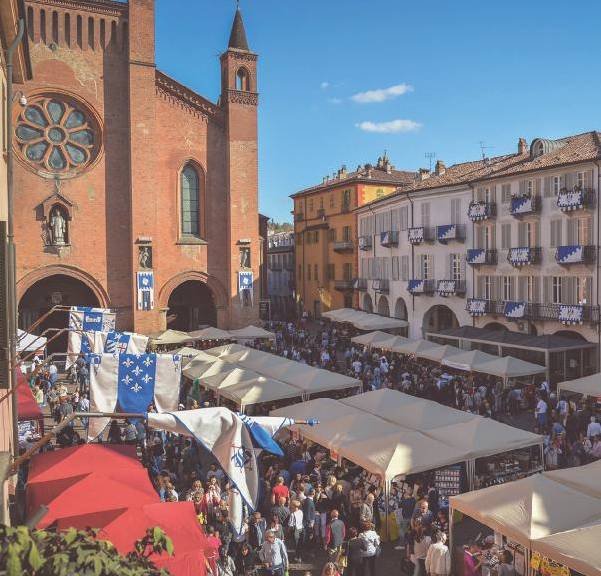 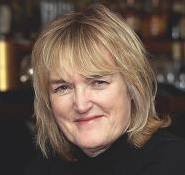 Fiona Beckett is a Decanter contributing editor, a widely published author on food and wine, and wine columnist for The Guardian

Christmas markets don’t always get beyond glühwein or vin chaud, but if they’re slap in the middle of a wine region it’s inevitably going to be a central part of the experience (see December 2019 issue). The picture-book-pretty town of Colmar, in Alsace, has six Christmas markets which run simultaneously from the end of November through December. Of these, the one in the Place Jeanne d’Arc is the most gastronomic. There’s obviously temptation in the form of foie gras, should you eat it, too. www.noel-colmar.com