departments
/ my house
The Sum of Its Parts
A family in the Netherlands builds a well-styled addition from creatively sourced materials.
TEXT BY Tracy Metz
PHOTOS BY | @THEINTERIORTOURISTS Anke Leunissen In a quiet coastal town north of Amsterdam, Ayla Geest and Jordie Kuin renovated a house for Ayla’s parents while designing a private extension for themselves. The brick rear facade of the existing structure became the living room wall of the younger couple’s new space. 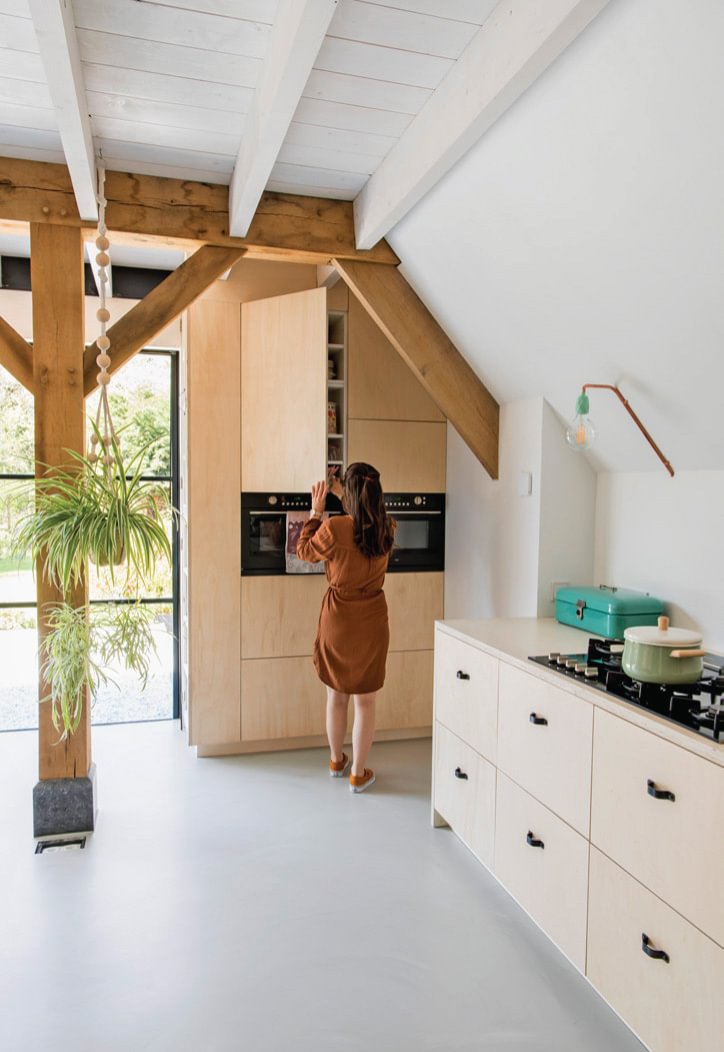 The bench is by Cuun for House Doctor. In the kitchen, custom cabinets feature leather pulls by Brût Amsterdam.

Three years ago, interior designer Ayla Geest and her partner, Jordie Kuin—with their two French bulldogs, Bullie and Cooper, in tow—were searching outside Amsterdam for a new house. At the same time, Ayla’s parents, Fred and Els, wanted to downsize. The family decided to pool their resources and look for a place together where each couple would have their own space. “We found this house that was empty and almost derelict,” Ayla says, “but the location was idyllic, so green and close to the sea. And we knew the municipality would allow us to build it out.”

The family came up with a plan to expand the house into the back garden—though a generous amount of green space remains. The couples each have their own front door, with Ayla and Jordie living in the new section and Ayla’s parents in the pre-existing house. What was once the rear facade of the house is now the exposed brick wall of Ayla and Jordie’s living room.

What they didn’t know at the outset was that the town would insist that the new building have the same style of pitched roof as the existing house. “That was a bit of a financial blow,” says Ayla, “as it meant that we had to rethink the entire roof.” In order to use the space under it, they added two dormers on both sides. Of course, everything took longer than planned, and Ayla and Jordie lived with the Geests in their not-yet-renovated house for a year and a half. During the process, it went from a two-to a three-generation home, with the arrival of Ayla and Jordie’s daughter, Cato.

The family hired a contractor for the roof and for the shell of the new building, but they did everything they could themselves, with the greatest possible attention to detail. Take the stainless steel screws that hold the wood of the rear facade in place. “Usually those are screwed in with a power drill,” says Jordie, “but then they’re never really in a straight line and some go in too deep and others not deep enough. We wanted it to look just right. So we made a template and my father-in-law and I screwed in every single screw by hand.” In the dining area, Ayla and the couple’s daughter, Cato, sit at an IKEA table surrounded by mismatched chairs. 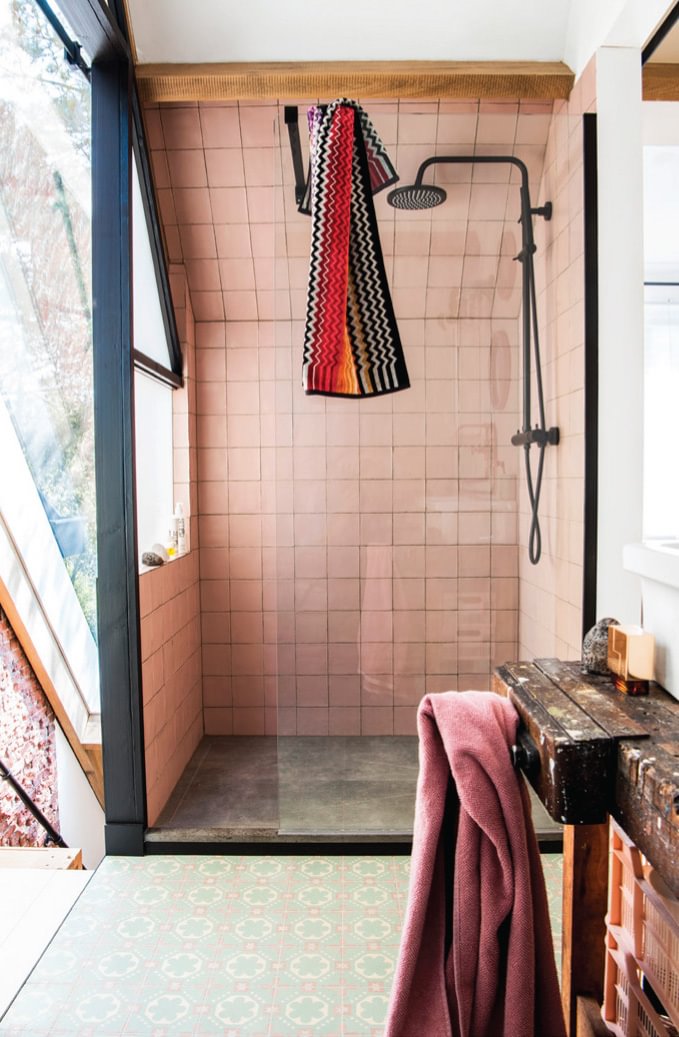 The steel and glass wall is by Different Steel. Handmade Portuguese tiles line the floor of the upstairs bathroom, where a MissoniHome towel adds a bright touch. Cato’s play-space features IKEA cabinets and a rug by Lakaluk.

“We decided to put our money into the construction and to source our interior from wherever we found things we liked.”
AYLA GEEST, DESIGNER AND RESIDENT

They also mounted the steel frame of the glass door and windows on the rear facade themselves—twice. “Everything was in place and we looked at it and said to each other, not good enough. So we took it out and did it again,” says Jordie.

The new structure has a simple, mostly open plan, with no hallways—“a waste of space,” according to Jordie—and two floors of about 625 square feet each. Downstairs there’s a dining table, with the kitchen running along one side and a TV nook on the other. The landing at the top of the stairs leads to the bathroom and through it to the master bedroom and their daughter’s small room.

Ayla and Jordie were more pragmatic than dogmatic when it came to the interior. Some things are new, such as the cupboards and the bedroom floor from IKEA, but an important source was Marktplaats, the Dutch equivalent of eBay. That’s where they found the wooden staircase and the hood that rises out of the kitchen countertop. “We would have liked a steel staircase, but it was too expensive,” says Ayla. “We found this wooden one on Marktplaats for a hundred euros.”

The completed addition is cozy, and very personal. “We could have made this house bigger, but we didn’t really see the need,” says Jordie. “It’s already our dream house.” 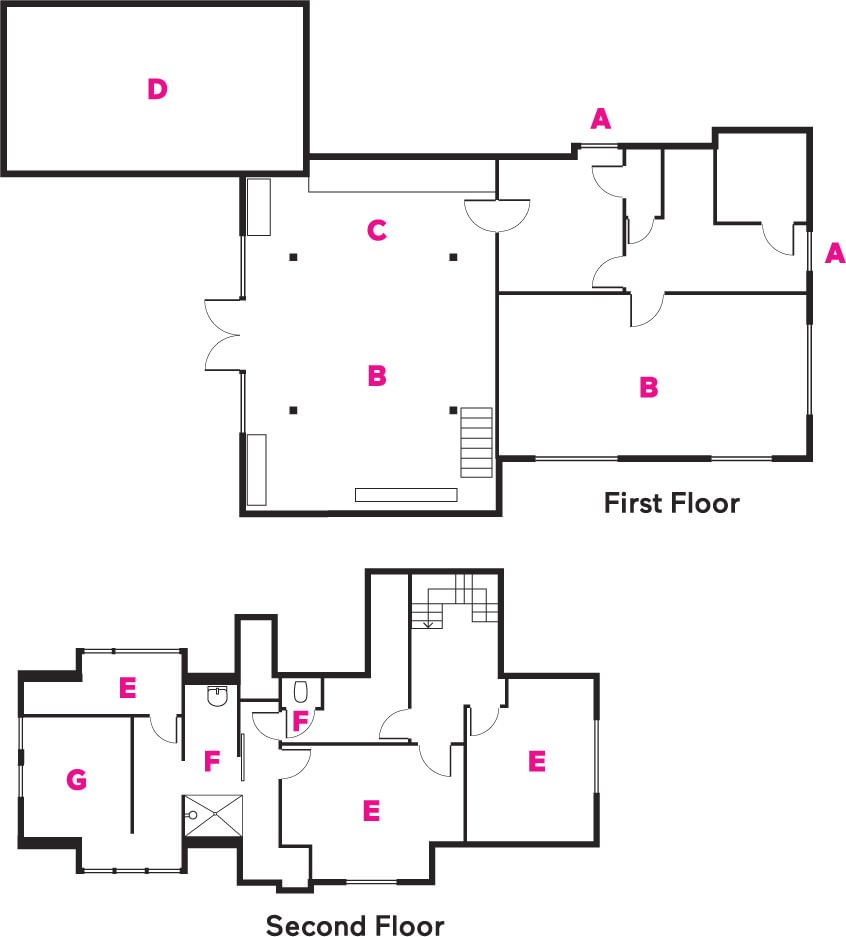