John’s love of sci-fi themes seeps through in this epic concept piece, which began life on his iPad before being painted using Photoshop. 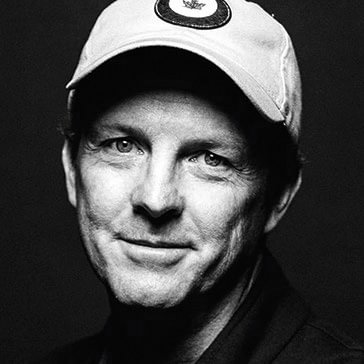 With artworks that turn awesome landscapes into beautiful visual poetry, and gallery shows all around the US, John Burton is a California painter that fantasy and sci-fi artists are sure to find inspiring. His incredible use of colour and ability to capture the ruggedness of the landforms and the nuances of light, climate and atmosphere have been honed over decades of plein air painting using oils on canvases five to six feet wide. Looking at his paintings, it’s not hard to imagine a dragon coiled around a rocky crag to the side of a great mountain, or a star cruiser alighting at a distant desert base.

The artist has seen this too, and one of the things that makes him so interesting is that his latest mission is to take the understanding of light, form and colour learned over three decades painting outdoors and turn it to his advantage in the world of concept art. Things are all a bit hush-hush still, but soon John’s creativity will be seen on the silver screen.

“I’m currently working for a production company for two upcoming feature films,” he explains. “I can’t discuss details, except that they’re both in the science fiction genre, and the worlds have been very inspiring to explore.”

This exciting new strand to John’s career began in 2017, with an event called the Art Summit, held at a mansion by the sea in San Diego. Organised by John and the concept artist Dylan Cole, the summit brought together leading artists working in the entertainment industry and traditional artists who have shown in museums and galleries around the world. Attendees included Bryan Taylor, John Park, David Dibble, Jonathan Bach, David Levy, Joe Pepe and Jonathan Berube. The event opened John up to a whole range of new creative opportunities.

“The environment of sharing and learning was so intense, meals and sleep were getting in the way. My life changed after that weekend thanks in large part to Dylan Cole,” he says. “I have a dream of recreating this event annually where we can get artists from all disciplines together and learn from each other.”

One of the main differences between concept artists and traditional painters is, of course, their choice of media. John, for instance, is an oil painter who knows how to get the most out of his brush and a set of thick, messy oil paints. Concept artists, on the other hand, use applications like Photoshop, Painter and various 3D modelling programs. Since 2017’s Art Summit, John has embraced Photoshop and a Wacom Cintiq, and has been learning how to use them with intensity and enthusiasm.

So many digital artists today say they would love to work physically with natural media, but John feels like he’s swimming in the other direction. He’s spent time reflecting on not only the transition from paints to pixels, but also what the trained painter can bring to the digital environment.

“Trying to transition from traditional to digital is like spending years learning French, then trying to learn Japanese”

“Even though we’re all artists, trying to transition from traditional to digital is like spending years learning French, then once reasonably fluent trying to learn Japanese,” explains John. “Knowing the one language helped me see some of the structure behind how a language works, but it was still a new language. When you learn a third language it’s hard, but you know it’s possible and what to expect. Because I knew one artistic language, I always knew I could learn a new one – it would just take the same commitment of hours and effort.”

The artist’s deep connection with the American West is evident in this imagined future meeting of cultures.

For John, the most challenging aspect has been figuring out a workflow. He was confident about bringing his drawing, design and colour sense to the new artform, but real brushes and colour mixing were being replaced by quick keys, software functions and myriad ways of developing an image. A digital artist can feather or smudge a mark, or even remove a certain colour entirely, in a few gestures.

The big difference he says, is that with oils the artist is using their skills to do a lot with just a brush, some paints and a surface, while the digital artist has so much choice that their challenge is to do a little with a lot. “Digital art has so many options through Photoshop, 3D software or the millions of assets you can purchase and apply to your design. It gives you endless possibilities and an infinite level of realism,” he says. “You need to reduce your design so that you don’t get too enamoured by the idea of showing every hair on a beard or every window in a massive city. Art has never been about being encyclopaedic, it’s about being a poet.” Working with strong forms first, John adds the detail to build up a story in this concept piece, reminiscent of the worlds in Asimov’s Foundation. “The giant Venus fly trap plants and the pearl-like structures help anchor the image in a way that pushes other elements,” says John.

That poetry is now coming out digitally in portfolio pieces displaying dystopic planetscapes, eerie swamp lands, ancient temples, futuristic spacecraft and lost desert cities. John’s new artworks are on a par with some of the leading concept artists that have inspired him, and he’s pulled some of it together into a book entitled Departure, where it sits alongside many of his finest traditional pieces.

John’s experience is capturing the interest of artists far and wide. Earlier in 2019 he was invited to give a lecture and demonstration at the LightBox Expo in Pasadena, California. He felt like he was being welcomed into a new genre and enjoyed connecting with the other artists and finding out about their work. As this article is being written, John has just accepted an invitation to Pixar Animation Studios to give another workshop. Here John reveals a village in the jungle that has been lost to time. 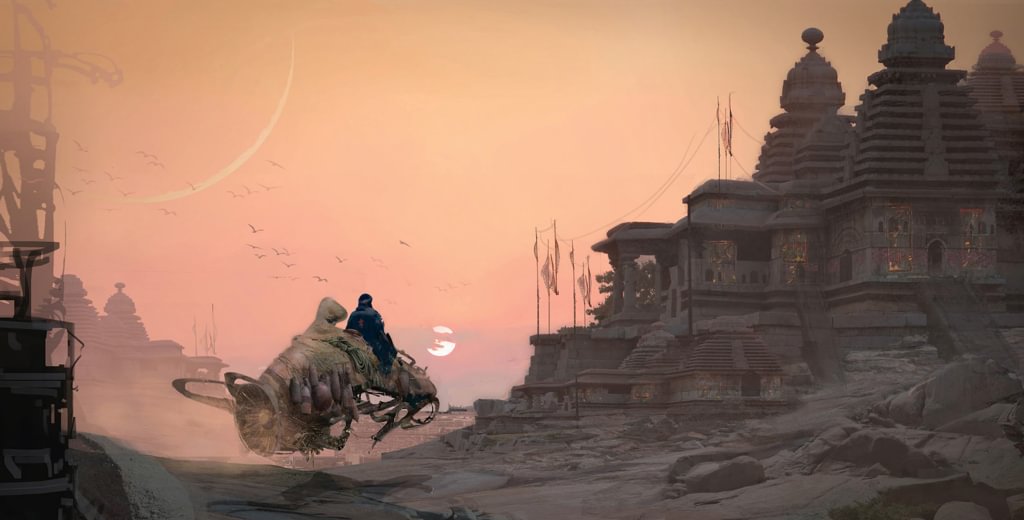 Sunset over a desert settlement as a traveller returns from the wastes, in John’s concept work.

This digital painting focuses on a glowing power source that attracts ships like moths to a flame.

Despite this growing reputation in the entertainment industry, John hasn’t forgotten his roots. “On the traditional side of my career I’m still creating oil paintings for exhibits at galleries and museums across the country,” he says. “I’ve just finished a museum show in Montana, and I’m gearing up for a museum exhibition in Taos, New Mexico, in conjunction with one of my artistic heroes, Nicolai Fechin.”

Fechin passed away in 1955, but was part of the Russian Impressionist movement, which had an influence on John particularly because of the way practitioners applied their paints. According to John, it looks like they painted with their fists, with courage and bravado. This approach is easy to detect in some of John’s oil paintings.

That sense of the physical will never leave John. Even as he delves deeper into Photoshop and other digital tools, he believes in painting outdoors and studying the way light falls on forms in different locations. It influences how his digital paintings are created. “Painting only from photos is like writing a novel about Venice and only doing your research online. You may be able to write an interesting book, but there will be an element of truthfulness lacking because it’s all second hand,” he says.

As we wait with anticipation to find out what movies John’s been working on, he’s looking forward to more film production projects. Narrative is an area he wants to explore further, and he’d like to develop some of his own stories either for print or the big screen. “All while finding a sliver of time to create a few oil paintings,” he adds.