FEATURES
/ A longer look at travels near and far
/ OUR MAN AT BURNING MAN
LOST IN THE DUST
For one week every year, a city rises out of the desolate Nevada desert to host the greatest party the planet has ever produced: Burning Man
WORDS KEVIN EG PERRY
@ KevinEGPerry
PHOTOGRAPHS SCOTT LONDON @scott.london 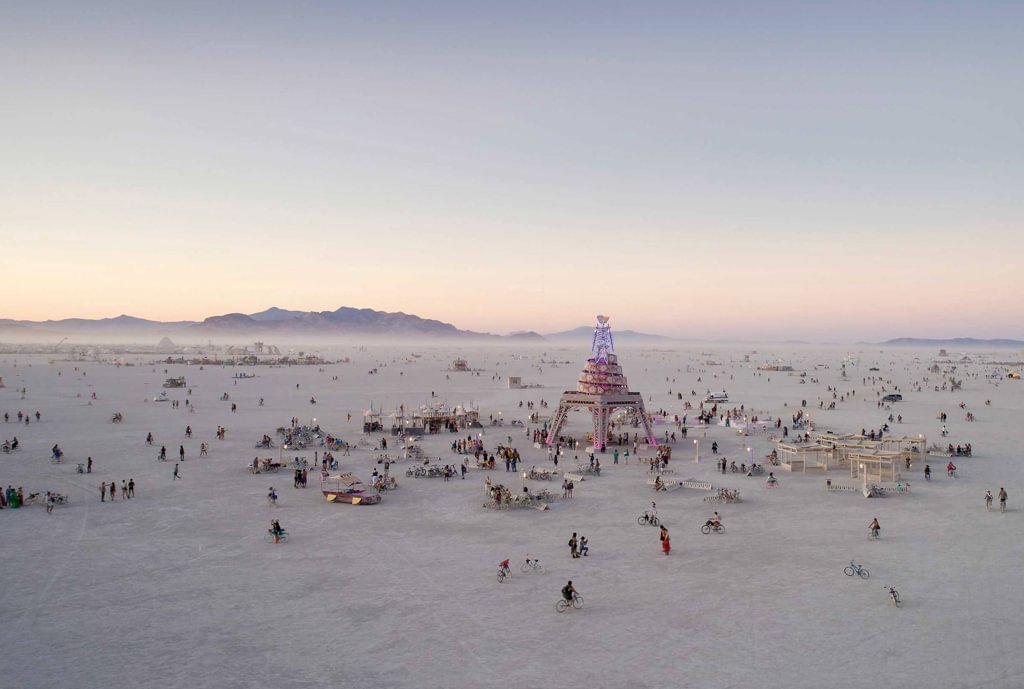 NOT LONG AFTER I REACH THE DESERT I REALISE IT IS trying to kill me. The land has been baked hard by an unrelenting sun. The wind whips the alkaline dust into angry dervishes. The playa seems to stretch out to infinity. It is too hot and too dry here for life to ever feel welcome. This is Nevada’s Black Rock Desert, 1,000 square miles of absolutely nothing. It is so flat and so empty that you might come here if you were trying to set a land speed record, or launch a rocket into space. What kind of maniacs would look at this alien void and decide to throw a party?

We arrive in convoy. It is the last week of August and hundreds of buses and RVs and U-Haul trucks and cars are crawling along Highway 34 away from the last glimpse of civilisation, a tiny no-horse town called Gerlach. Turning on to the final desert dirt track our vehicles slow to 10 mph. At the gate, greeters encourage us to climb down and roll in the dust. They are wearing bondage gear or nothing at all, and they want to give us a hug. ‘Welcome home,’ they say, but what they mean is ‘welcome to Burning Man’.

Founded in 1986 by artists Larry Harvey and Jerry James, Burning Man is a hard thing to define. At times it might feel like a giant rave, or an open-air art exhibition, or a particularly hardcore strain of survivalist camping. Once the preserve of freedom-loving hippies with heads full of acid, you’re now just as likely to run into Silicon Valley tech billionaires - also with heads full of acid. It all plays out in Black Rock City, a temporary metropolis arranged like a giant horseshoe with a towering wooden statue of a man standing proud at the centre.

The greeters point us in the direction of our camp, at 7:45 and E. The roads radiating out from the centre are numbered like a clock face, from 2 to 10. The perpendicular roads which join them are lettered, starting with the Esplanade at the centre of the horseshoe and then A, B, C and so on all the way out to L. This simple system means that it takes a certain amount of ingenuity to get lost, a feat I will manage repeatedly over the coming week.

Soon after we find our camp, we start building. My friends and I run a British pub-turned-flamboyant drag club known as the Queen Dick, a pun on Eastenders boozer the Queen Vic that’s made all the better by the fact that approximately nobody at Burning Man will make that link. We erect a bar, a pink stage with an illuminated wooden heart suspended above it and, improbably, an upright piano. We also have eighteen kegs of beer and cider and hundreds of bottles of spirits, all of which we plan to give away. No money changes hands at Burning Man. One common misconception is that it runs on a bartering economy. In fact, everything is given away. ‘Gifting’ is one of the core tenets of Burning Man’s philosophy, along with ‘Radical Inclusion’, ‘Radical Self Reliance’ and ‘Radical Participation’. That means there are no bystanders and no observers. Everyone comes here to play their part, and each camp, each outfit and each party seems more outlandish than the last. Burning Man is what happens when 70,000 people ask: ‘Is this too much?’ and nobody ever replies: ‘Yes, that’s too much.’

On the first night after the pub is built I take my bike and cycle out into the deep playa. I watch as the sun sets over the city, purple hues filling the sky over a distant mountain range, the bleached light of day fading into the black of night. The horizon glows with countless neon lights, but these are unreliable landmarks. As well as the camps there are hundreds of slow-moving vehicles, known as art cars, and they move across the playa with no obvious logic. Pyramids and towering sheep, fire-breathing dragons and even a scale replica of the Golden Gate Bridge are never to be found where you left them. Each of them throbs to the beat of their own sound system, and some of Burning Man’s most infamous nightspots - with names like Mayan Warrior and Robot Heart - are mobile. At one point, feeling disorientated, I hitch my bike to the side of a ship gliding past and climb up on deck. I grip the rigging and gaze out awestruck. Sometimes in life you need something to hold on to, even if that something is a giant neon pirate ship in the desert.

Now the real game begins. Where on Earth did I leave the pub? 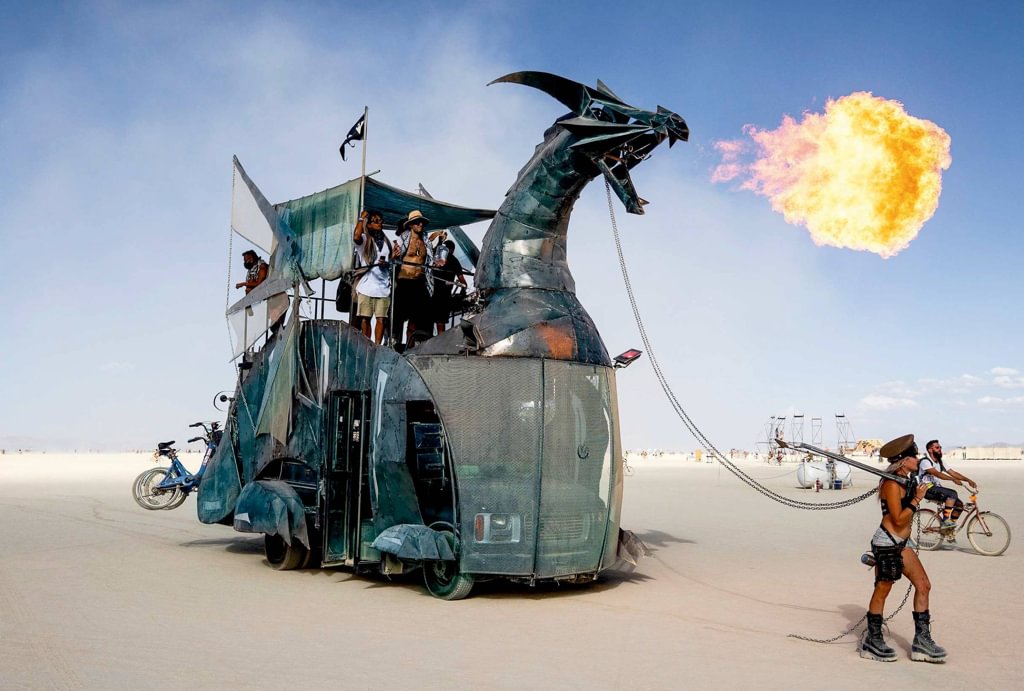 Just as I’m starting to become exhausted from cycling that first night, I spot a rest stop: a little warren of sofas in the middle of the desert. It’s as if Burning Man has anticipated my exact desire. Throughout the week this happens time and again. Feeling hungry? Here’s a camp passing out quesadillas. Growing weary? This place will give you a coffee – although they might insist on spanking you. Struggling in the heat of the day? There’s a lounge full of people misting you with cool water. In need of a strong cocktail? Well, take your pick. This phenomenon comes with its own maxim: ‘The playa provides.’ Slowly, moment by moment, place by place, the desert is starting to feel less inhospitable.

Eventually I stagger back into the welcoming bosom of the Queen Dick. My friends are dancing on the bar and pouring shots into the mouths of a crowd of people I’ve never seen before. Night becomes day and day becomes night. Each morning in the pub I swap breathless tales about the things I’ve seen and found and am rewarded with stories of things I hadn’t even imagined. Everyone comes to Burning Man for different reasons. Everyone’s Burning Man is different. 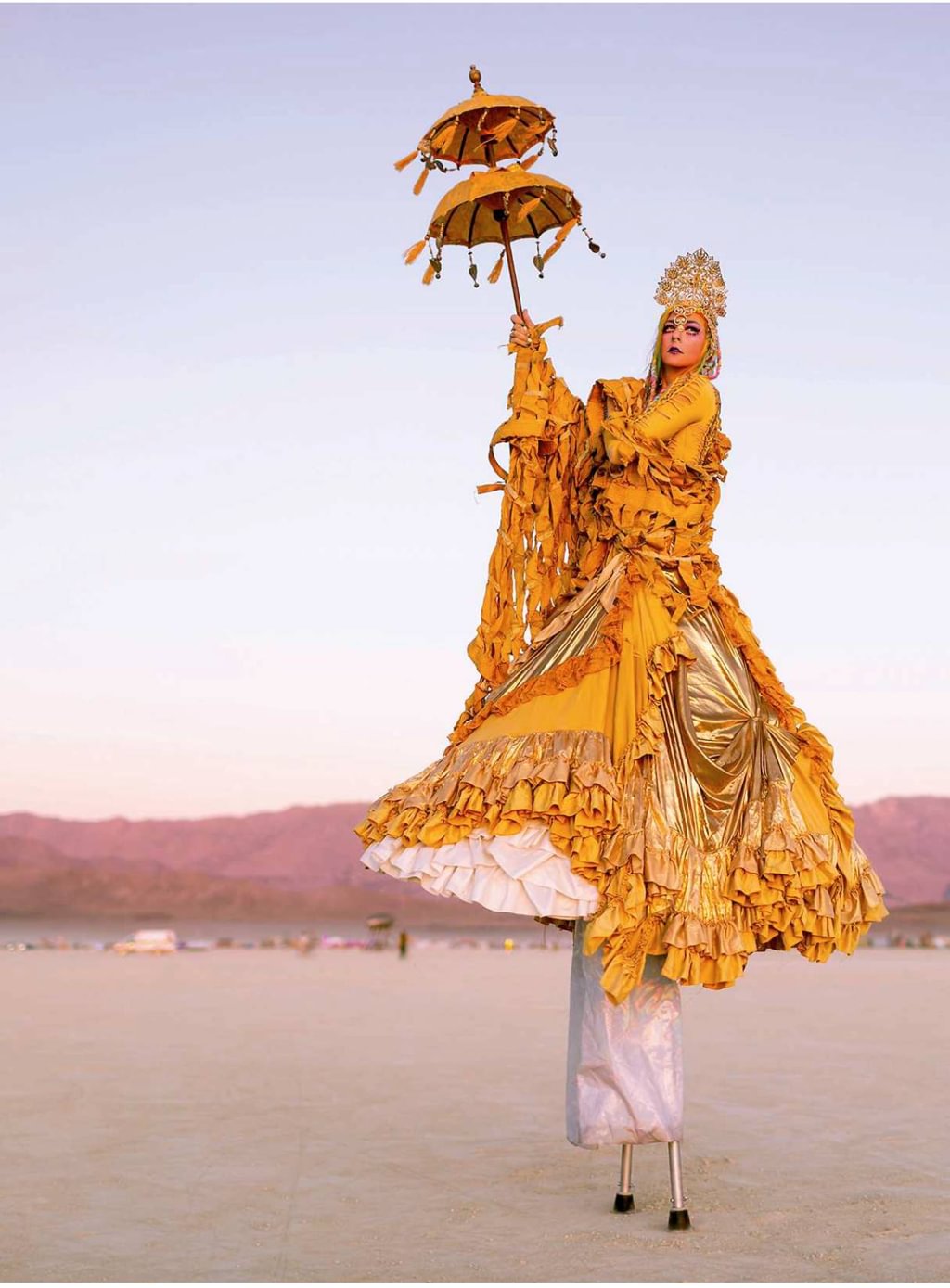 There is only one universal communal experience, and the clue’s in the name. On the penultimate night we leave our bikes and walk to the man. All 70,000 of us gather, at the centre of our new community, to watch him burn. We sit in a vast ring, whooping and cheering when he goes up in flames, then linger as the heat prickles our faces. The next day we begin dismantling the pub. When we’re done we sweep the ground meticulously, making sure not even a scrap is left. Litter is taken very seriously. It’s known as ‘MOOP’ (Matter Out Of Place) and creating it is an unforgivable faux pas. By the time we leave, the desert will look as blank and foreboding as it did when we first arrived.

Belatedly, I am coming to understand the significance of the desert. It is easy to become distracted by Burning Man’s dizzying lights and sounds, the chaos and the hedonism, but beneath it all is this grand, blank slate. Every dance floor, every piece of art, everything you see and touch has been built by someone expressly for you to enjoy. Everything has a purpose. On this sprawling canvas we come together to build whatever we like, wear whatever we like, be whoever we like. For this brief and wondrous grain of time, it’s home. ■