THUNDERSTORMS generated by the intense heat of the bushfires burning in Australia have probably carried as much smoke into the stratosphere as a volcanic eruption.

Blazes across the country in the past few weeks have been so powerful they have generated their own weather. They create rising air that carries ash and smoke and results in the formation of thunderclouds called pyrocumulonimbus (pyroCbs) above the fires.

Some of these clouds are strong enough and rise high enough to have channelled smoke into the stratosphere – a stable layer of air between 10 and 50 kilometres up where particles can get trapped and persist for half a year or longer. Smoke from the fires has moved eastward in the stratosphere and made a full circuit around the world, according to NASA.

There were at least 20 pyroCbs between 28 and 31 December, and more on 4 January, some of which put smoke into the stratosphere. The scale of the smoke there has now been calculated by David Peterson at the US Naval Research Laboratory, who presented his preliminary findings to the American Meteorological Society at a meeting in Boston last week.

“It’s very likely on a volcanic scale,” he says. Peterson estimates the effect is similar to a moderate eruption, rather than on the scale seen after the massive 1991 eruption of Mount Pinatubo in the Philippines, the largest in modern times. He has done similar work on the impact of pyroCbs before. He found that Canadian wildfires in 2017 put as much smoke as a volcano into the stratosphere. 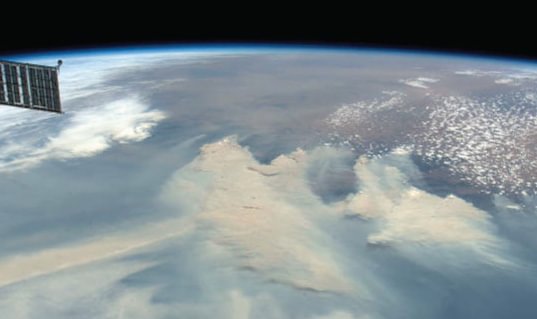 Smoke from the Australian wildfires has circled the globe (NASA)

While it is well known that a volcanic eruption can put enough particles into the atmosphere to have a cooling effect, the different chemistry of pyroCbs means the impacts of the fires on global temperatures aren’t yet clear.

They may have a warming or cooling effect, and it isn’t known how long the smoke will persist. Peterson says the biggest question is what role pyroCbs are playing in the climate system. Some of the smoke plumes carried by these clouds are also getting high enough to affect the ozone layer, which is usually at least 15 km up.

We may have a better idea of the smoke’s impact soon, thanks to NASA flying a plane earlier this year through the upper level of a pyroCb generated by US wildfires. “It wasn’t as massive as these Australia plumes but fortunately at an altitude the aircraft could get to,” says Peterson. That research will reveal more about relevant atmospheric chemistry in the clouds. Combined with satellite data, this should give us a clearer idea of what to expect.

Alan Robock at Rutgers University in New Jersey says if the smoke has a cooling effect, it is unlikely to be huge at a global level, but could cause cooling of several degrees C at a local level. If the Australian pyroCbs produce twice as much smoke as those from Canada in 2017, “it still would not be a large or long-lasting impact on climate,” he says. ■