Feature
/ 1997 993 Porsche 911 RSR
Air-cooled royalty
The final air-cooled 911s are revered by most Porsche enthusiasts. We drove one of the rarest of them all
By: Wilhelm Lutjeharms WilhelmL_CARmag
Photos: Peet Mocke Petridish_Mooks 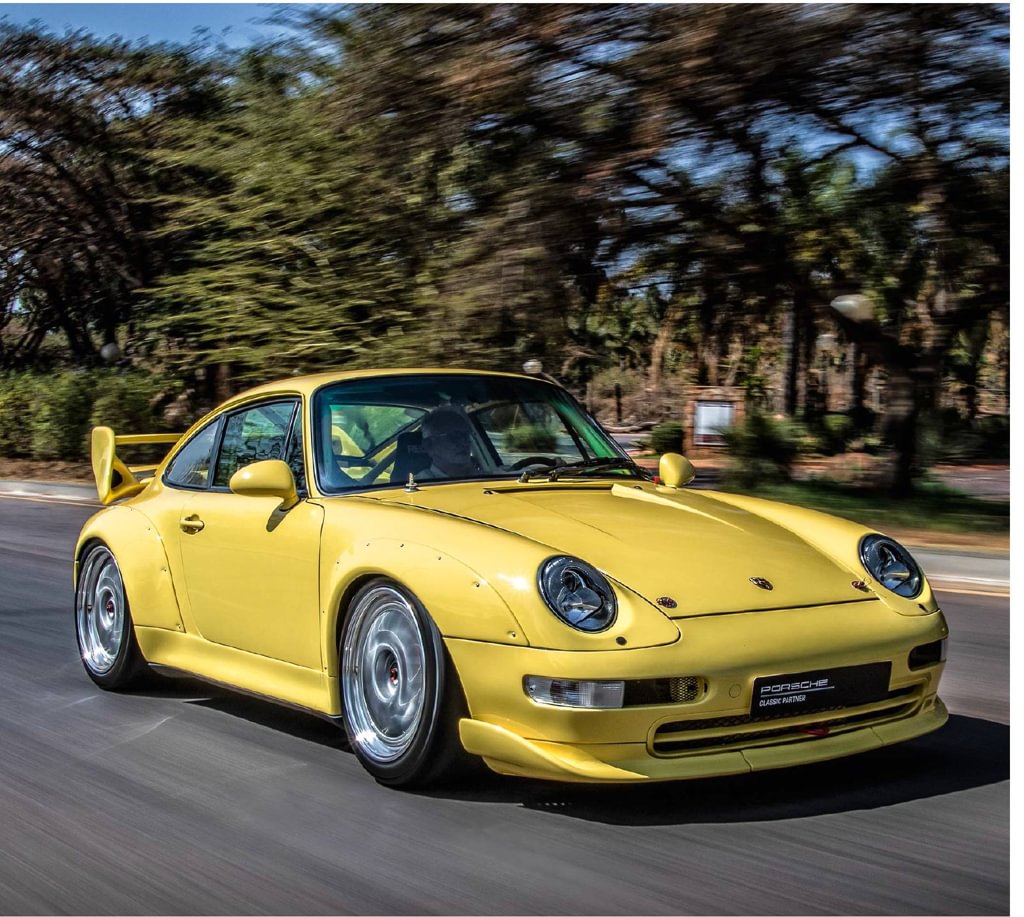 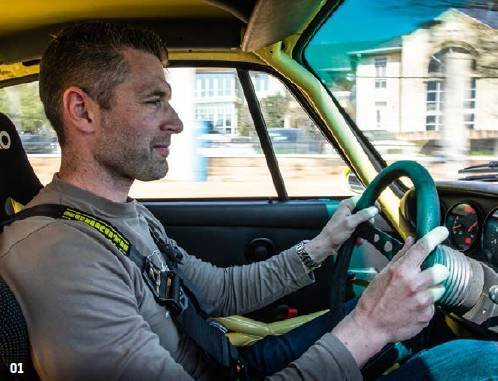 01 The noise inside is intense, the driving position is perfect and the Alcantara-trimmed wheel brims with feedback.

TO many, the 993 is the epitome of Po r s ch e ’s 911 portfolio: air-cooled, compact and light, with a beautiful, fluid design. The range offered a plethora of high-performance models: Turbo, Turbo S and GT2 (in Street, Clubsport and Evo versions), while the naturally aspirated versions were celebrated with the Carrera RS. Track and race models included the 993 Cup, but much rarer was the 993 RSR: just 45 were made (some sources suggest 30).

On first appearance, the RSR looks pure 993 GT2. Those riveted wheelarch extensions, subtle front spoiler and large rear wing are not unlike the hyper 911’s. However, parked next to each other, they are far from identical. The RSR’s racecar foundation is evident up close with split-rim alloys placed snug within the wheelarches and a removable boot lid. It sits low to the ground and its stance is pure racer.

Open the featherweight door and there is colour-coded, exposed metal wherever you look. The roll cage, Schroth six-point harness and Recaro bucket seats leave you in no doubt this car is built to line up in front of a starting grid at the track. However, we would be driving it on the road. 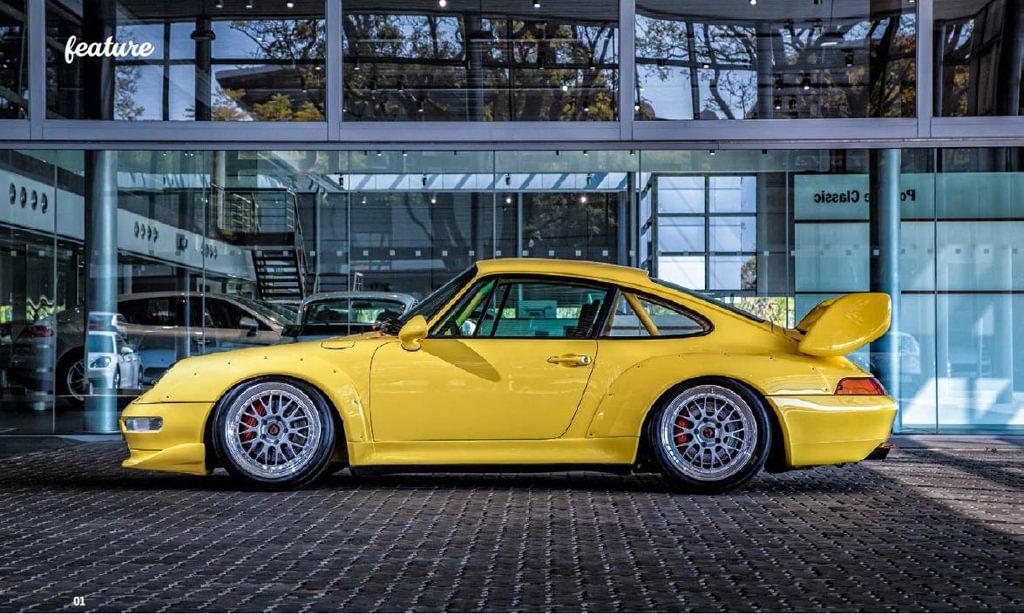 01 Hunkered down, with the wheels filling the wheelarches and ducking underneath their lips, the RSR is pure racecar. 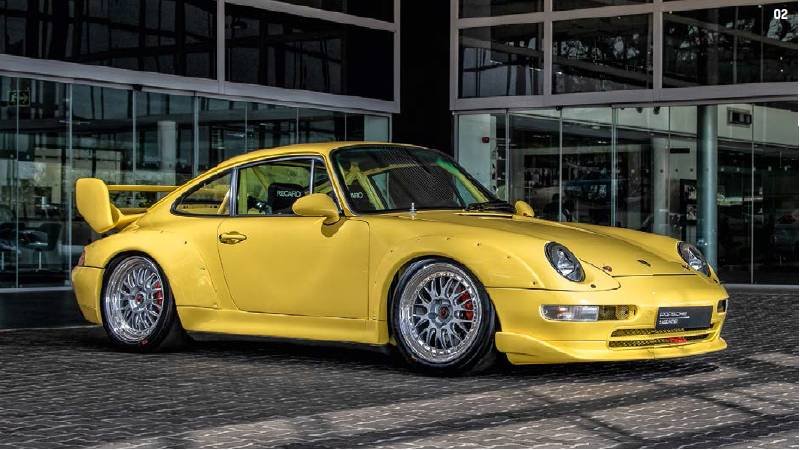 02 There’s no mistaking the 993 for any other Porsche.

This car was imported to South Africa shortly after production by its second owner before being sold in 1999. The then-new owner kept it for 20 years before he sold it back to the previous owner, mere days after our drive. During the former’s time with the car, he used it purely for special occasions, explaining the low odo reading of 8 700 km. This figure includes a six-hour endurance race at Phakisa Freeway outside Welkom. As a result, the car is in perfect condition, has never been involved in an accident and still has its original trim and matching engine and gearbox. 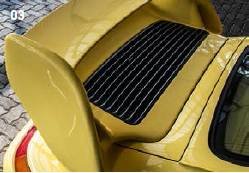 03 Top plane of the wing is adjustable. 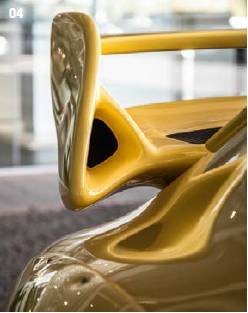 04 Triangular air intake for the engine.

I strapped in and before I pulled the harness tight, I slammed the door shut (you can’t do this once the harness is tensed). The hollow sound of the door reverberated through the cabin; the stripped interior is as raw as you’d expect. I was unable to move anything besides my legs and arms to operate the controls. It’s a special feeling: at one with the car and extremely secure. 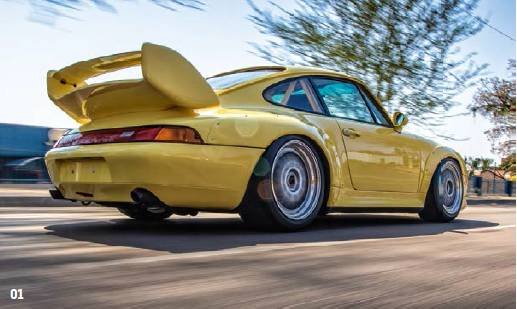 01 The RSR darts into corners and handles only like a racecar can. 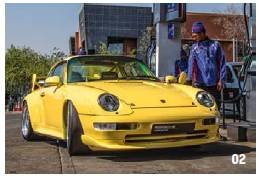 02 Not your usual sight at a fuel station. 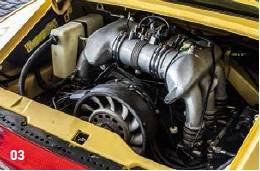 03 The air-cooled engine with the horizontal fan. 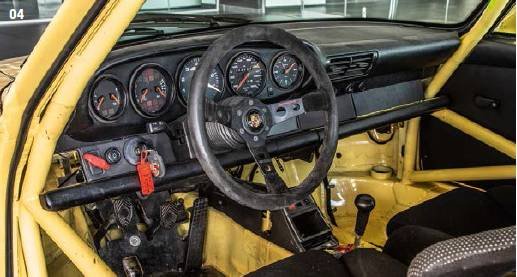 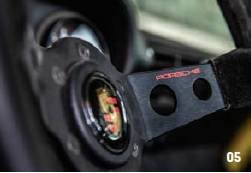 05 Steering wheel with its drilled holes and Porsche inscription. 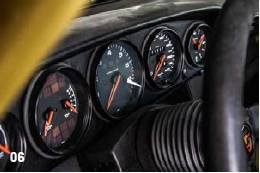 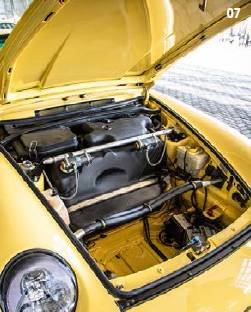 07 Front compartment houses the fuel tank as well as a strut brace between the suspension towers. 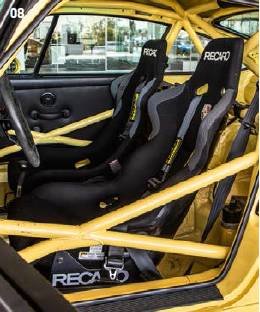 08 Apart from adding structural rigidity, you feel safe in the seat owing to the full cage.

If you prefer your cars naturally aspirated, this is the ultimate 911

The size of these older Porsche 911s is something to celebrate. They are compact and the driver’s view over the short bonnet is unrestricted even when seated this low. I relished the sight of the large rear arches in the side mirrors and the prominent wing in the rear-view mirror. The driving position is close to perfect with the Alcantara steering wheel near your chest and the naked gearlever falling to hand. Oh, how I love a proper racecar!

Turn the key and the drivetrain’s loud rumblings fill the cabin. Press the clutch and the clattering quietens, but let the clutch out and the sounds from the input shaft and gears are unfiltered. There is a mechanical element to a race-car that no road car can offer or replicate. The clutch bites stronger and quicker than any 993 road car I’ve driven but that is to be expected. With no pressure from fellow racers, timing equipment or marshalls, I allowed my senses to absorb every little nuance.

The moment you pull off, you realise how stiff the suspension is and how the car moves as one. The response from the steering when you turn in even marginally is such a highlight I wish all modern sportscars offered such a direct feel. The whole car brims with feedback. You can sense how frustrating it is for the RSR to move in a straight line. It dives into a corner the moment you tweak the steering wheel barely off-centre thanks to the camber settings on the front wheels.

The sound in the cabin was deafening but I enjoyed each time I flexed my right foot. The metallic flat-six sound increased in intensity as the revs climbed past 5 000 r/min and I wondered what other road users thought as this 1990s racecar passed; it looks like nothing else on the road.

My trust in the mechanical grip of the car grew behind the wheel. As the RSR gathered momentum, the intensity of the engine’s delivery spiked as we passed 4 000, 5 000 and 6 000 r/min before reaching the redline. The sensitive front-end sniffed out any change in the road surface or tram lines.

The M65/75 racing engine (six separate throttle valves located near the cylinder heads ensure immediate throttle response) is connected to a short-ratio manual transmission. The gearlever slips easily between the ratios and throttle response is incredible. You can understand why enthusiasts adore the air-cooled 911 and why they enjoy racing them. Together with the 911 GT2 racecars, these are the definitive air-cooled wonders and, if you prefer your cars naturally aspirated, the RSR is the ultimate 911. It seems this is also the only RSR to have left the factory in Pastel Yellow.

As the new owner stated: “Sometimes you part with something in your life that you know will come back to you. That has always been my feeling about this car. I regretted selling it and I’m delighted to get it back.”

For pure thrills, occasional track excursions and investment value, the RSR is near the top of the 993 pyramid. ■