BYSTANDER SOCIETY
The case of the disappearing duchess
Gladys, Duchess of Marlborough was the world’s most beautiful woman. And then she vanished. Hugo Vickers set out to find her

A chance dip into Chips Channon’s diaries changed my life. My father gave me the book to read and I loved it. There was an entry – December 1943 – that had Chips going into a Bond Street jewellers and spotting a strange creature – ‘a marionette of a woman, or was it a man?’ – dressed in grey flannel trousers, with long, dyed golden hair emerging from under a man’s brown felt hat, and a large masculine overcoat held in place with a wide leather belt. As Channon examined ‘this terrifying apparition’, he recognised her as Gladys, Duchess of Marlborough – ‘once the world’s most beautiful woman … the toast of Paris, the love of Proust, the belle amie of Anatole France.’ He approached her, but she pretended to have no idea who he was, dropped the clip she was examining and bolted out of the shop.

I was only 16, but the account gripped me. The transformation from the world’s most beautiful woman into a terrifying apparition was extreme to say the least. She who had once been a blonde beauty with huge blue eyes and an almost perfect Hellenic profile had virtually turned herself into a witch.

Born in Paris in 1881, Gladys Deacon was the kind of American heroine on whom Henry James based his novels (he had been at school with her father, Edward Parker Deacon, a rich Bostonian who dramatically shot dead his wife’s lover in 1892). Like other Henry James heroines, Gladys was brought up to consider marrying a British aristocrat, or a French or Italian one. Her specific ambition, developed at the age of 14, was to marry the Duke of Marlborough. She read about his wedding to Consuelo Vanderbilt and regretted that, despite being ‘wise in the ways of women’s witchcraft’, she was too young to get him. Yet she did meet him later, in London society, and was very taken by him, as well as by his American-born wife. 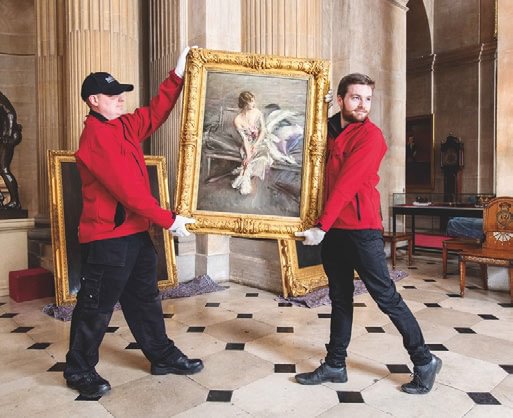 the portrait being returned to Blenheim Palace last year, after it appeared as the central piece in a Boldini exhibition in Italy The Marlboroughs had never been happy together (both wished to marry others), but he needed the Vanderbilt money for Blenheim, and her mother wanted the social éclat of a daughter who was a duchess. By 1906, they had separated. Gladys waited 14 years for Consuelo to give the Duke a divorce; she did so in 1920, only when she herself wished to remarry. Thus, Gladys was 40 when she became Duchess of Marlborough and moved into Blenheim Palace.

From her earliest days, Gladys was a great beauty. Artists vied to paint her – Boldini and Helleu, in particular – and she was sculpted by Epstein. Her eyes were painted inside the portico at Blenheim, where they gaze down on visitors to this day, and her features are on two sphinxes that face each other in the Water Terrace Garden. Her presence endures: an exhibition at Blenheim (Let’s Misbehave, 15 February-13 April) tells of her life there.

She was raised in intellectual circles in Paris, Florence and Rome, and lured artists and writers to Blenheim during the 1920s. She entertained figures such as Lady Ottoline Morrell, Lytton Strachey, Jean Marchand, Douglas Fairbanks Sr, Mary Pickford and the Birkenheads, as well as the King and Queen of Portugal.

Winston Churchill was a less welcome visitor. He described her as a ‘strange, glittering being’. Gladys was less polite about him: ‘There are some people who go through life bashing cymbals. He was one.’

She and the 9th Duke had no children, and when she became unhappy, she retreated to a far corner of the estate to restore the 5th Duke’s rock garden, and then bred Blenheim spaniels, which irritated her husband as they made messes all over the house.

The marriage deteriorated further after he converted to Catholicism and grew intensely disagreeable. Not that she was easy. She produced a revolver at dinner one night. When asked why, she said: ‘Oh, I don’t know. I might just shoot Marlborough.’ The Duke moved out, but in 1933, he did what dukes do, sacking the staff and closing everything down. Gladys had to go.

I was spellbound by the story. Little did I know that I was embarking on a life-changing experience – one that would lead me, in search of her, into the bleak corridors of a vast ‘lunatic asylum’, but also to the Farnese Palace and glorious Caprarola, north of Rome. It would take me to the hills above Florence, to Pikes Peak in Colorado Springs, to Blenheim. I would come to make friends with this mysterious being, would read her diaries and letters, and know more about her than perhaps she knew herself.

But in 1968, when I first read of her, I did not know if the elusive Duchess of 1943 had survived. There was an address for her, but when I wrote to her there, the letter was returned, marked: ‘Gone Away’. A visit to Blenheim was met with the response: ‘We don’t talk about her.’

Time went by, and in 1975, I visited the pub in the village where she had lived – Chacombe, near Banbury. No, she was not at Grange Farm, said the publican. ‘She’s been gone a long time.’ Did that mean dead? He didn’t think so. ‘She went to a hospital up Northampton way.’

To cut a long story short, I found her there, living in her own room in the psycho-geriatric ward of the grand St Andrew’s Hospital, which looked like a stately home, but was, in fact, a lunatic asylum (as Gladys called it). The main hall had been decorated by Colefax and Fowler, but her corridor was more clinical.

Though warned that she might not talk to me, indeed that she might simply announce that she was dead, I managed to get through to her. The first time I met her she was in a chair in the Green Room. On my second visit, she said: ‘You’ve given me a better laugh than I’ve had since I came here’ – and invited me to stay and talk. By then, Gladys was 94 and I was 23. 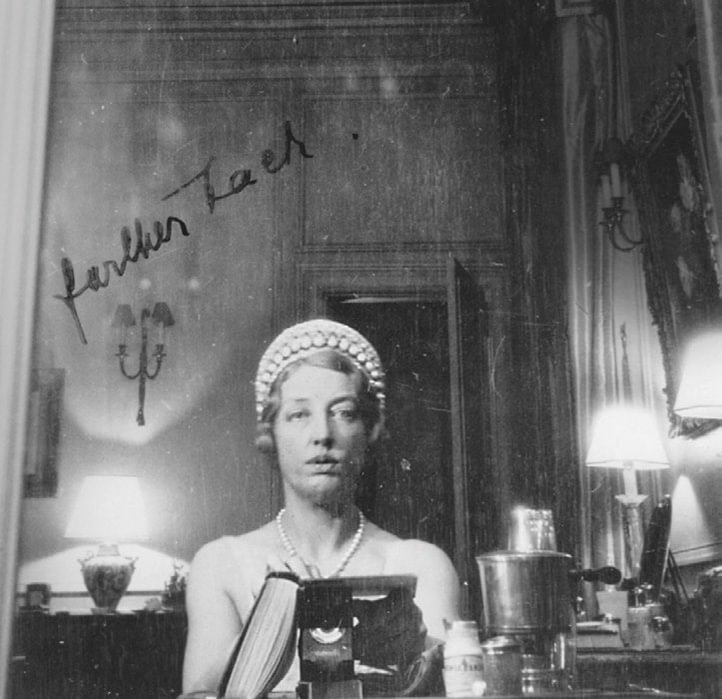 A ‘selfie’, taken circa 1928 by the Duchess, a keen photographer. Her tiara came from the Russian State Jewels auction at Christie’s

Later, she would be taken by wheelchair to the doctor’s office where we could talk together in private. She was almost stone deaf, had no teeth, had not really had any coherent conversation for some years and usually denied who she actually was. But she would read written questions and, if they appealed to her, she would answer them.

I would like to profess that all the conversations were coherent and conspiratorial. But lunatic asylums are not good places for sane people to live in. She had been moved there in 1962, when she was 81, and had lived eccentrically for years before that, in a house barricaded against the world. Villagers at Chacombe recall that sometimes she would go for a walk in the middle of the night, her torch flickering light on their bedroom ceilings. She never forgave her relations for putting her in the asylum, and sadly she would never get out.

Being surrounded by madness does no good for your state of mind. Invariably, Gladys began with hideous tales of the iniquities of the hospital, but once she had got that out of her system, she would switch and settle into a fascinating talk. She told me: ‘Don’t mix with fools. Fools rub off on you like bad dye.’ And so, too, do mad people.

From the sparkle of her conversations, I gleaned an idea of what she must have been like. She was fright-eningly well read, so as a beautiful girl she was more than capable of taking on the distinguished writers, politicians and artists that she met. Proust wrote: ‘I never saw a girl with so much beauty, such magnificent intelligence, such goodness and charm.’ And yet, she could play with people like a cat, she was capricious, and sometimes disappeared. She was, by turns, a great beauty adorned with lovely clothes, or uncaringly dressed, virtually in rags.

Why did it all go wrong? In a sense, she was the architect of what the outside world would consider her own destruction. When she was 22, she attempted to perfect her Grecian profile, and took wax injections in her nose – disastrous surgery invented by a Viennese doctor. The wax slipped and she developed necrosis. The procedure left her with a heavy jaw, and she lost some of her legendary beauty. Curiously, she seems to have gone through life undeterred by this, though people liked to say it led to her being a recluse. If anything, her treatment by the Marlboroughs was the disillusioning element.

Despite a great number of suitors falling at Gladys’s feet, she remained close to the Duke. But when he was finally free to wed her, it was too late for happiness. A Bohemian by nature, Gladys disliked life at Blenheim, and the man she married was not the man with whom she had enjoyed happy holidays on the Continent. She once said to me: ‘Sometimes something can happen to you that is so awful, it cuts you off.’ Until the late 1940s, she did occasionally go to London, staying at The Ritz. After that, she retreated to her Oxfordshire home before being moved to the hospital.

Gladys hated it there, yet her spirit was undimmed. Her philosophy – as she once told an early suitor, Count Keyserling – was: ‘The human bal masqué is temps manqué ’ and ‘Seclusion is a blessed thing and through it one may become anything.’

I will forever be grateful that she allowed me to alleviate that seclusion in the last two years of her life. She died aged 96 in 1977.

Hugo Vickers is the author of The Sphinx: The Life of Gladys Deacon – Duchess of Marlborough (Hodder and Zuleika, £25), out 9 January 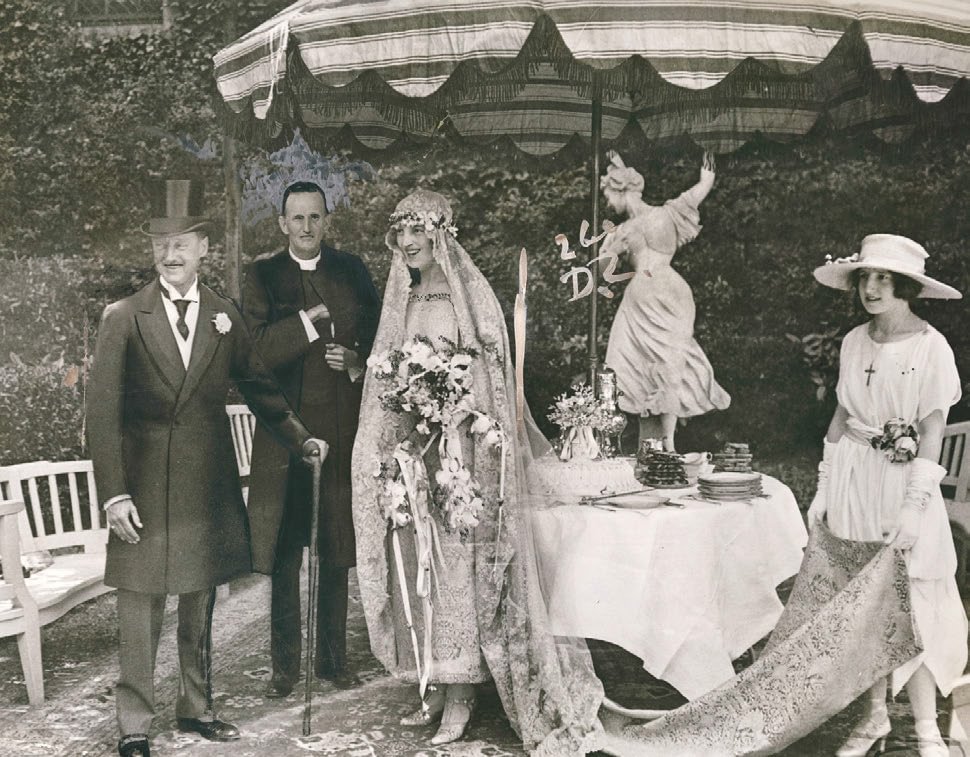 The Duke and Duchess of Marlborough at their wedding in Paris, 1921 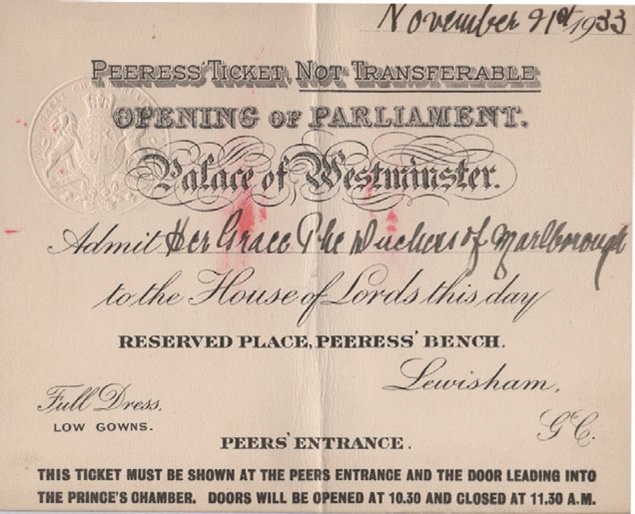 One of two sphinxes at Blenheim that depict the face of the Duchess.

a press clipping of the Duke 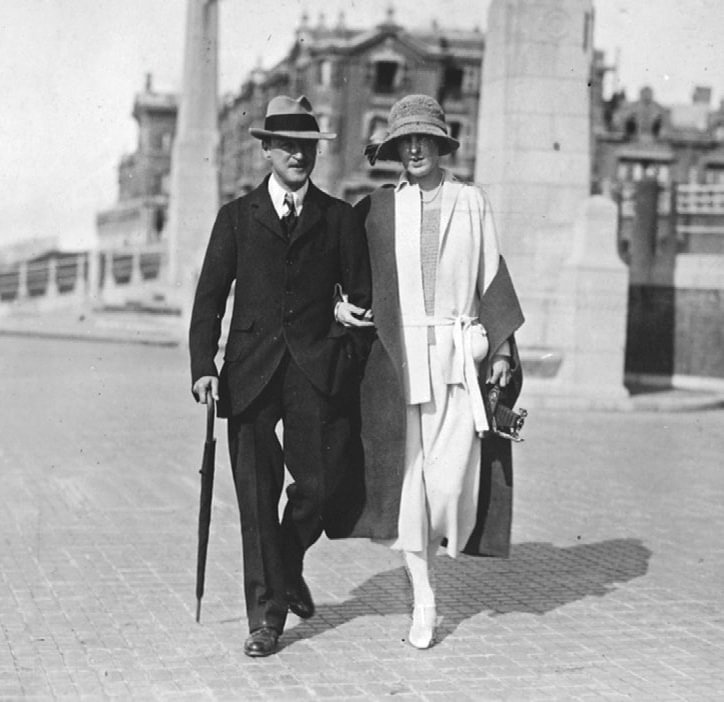 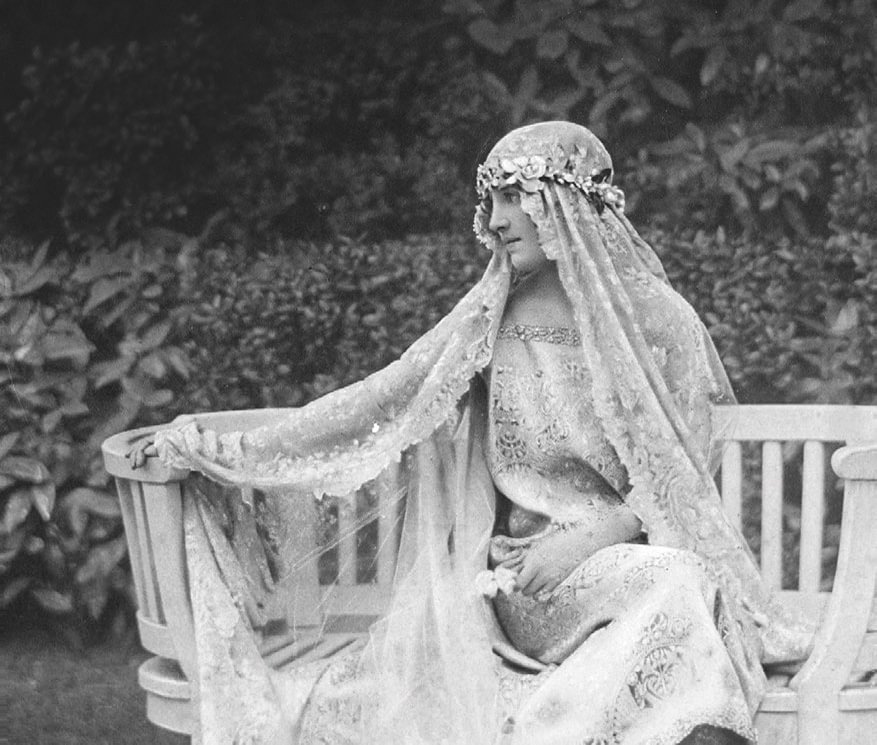 The Duchess on her wedding day. Left, her personal invitation to the Opening of Parliament in 1933 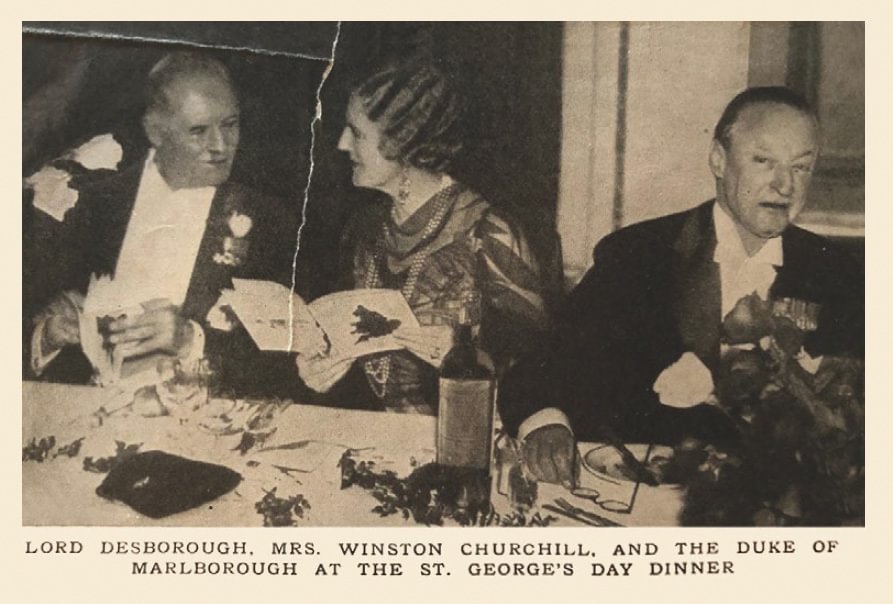 seated next to Mrs Winston Churchill, 1933