FEATURES
C’MON A MY HOUSE
VERSACE’S LEGENDARY PALAZZO IN MILAN IS TRANSFORMED INTO A FLUORESCENT SHOWCASE FOR THE BRAND’S FANCIFUL HOME LINE.
BY CHARLES CURKIN
PRODUCED BY PARKER BOWIE LARSON
PHOTOGRAPHS BY CYRILL MATTER Bullion-fringed pillows on a jacquard-covered sofa, all from Versace Home’s Rhapsody collection. Italian influencer Chiara Capitani and model Alex Stoller, clad in Versace, frolic on a bed at the Palazzo Versace in Milan. The Barocco comforter and cushions and Rhapsody side tables and lamps are all Versace Home.

WITH NO DANGER OF TURNING to stone, all eyes were on Medusa’s head during Milan Design Week in April. Versace, the storied Ital ian fashion house whose signature riff on the mythological snake-haired monster is now an icon of the late 20th century, presented its new home collection—and for the first time ever, outdoor furniture. The line ranges from sofas upholstered in a jacquard print that Versace calls Technicolor Baroque to glass side tables with three-dimensional Medusa heads encased inside.

The setting was Palazzo Versace, a former Franciscan monastery that was the late Gianni Versace’s private residence in Milan, converted for the occasion into a neon-hued showcase for the brand’s home and fashion collections. The brand’s creative director, Donatella Versace, tapped New York decorator Sasha Bikoff and Canadian artist Andy Dixon to collaborate on the vignettes. “We discovered the works of Andy and Sasha through Instagram,” she says. “They had each already been inspired by Versace, and therefore it was a meeting of the minds that resulted in creating something completely new and different.” 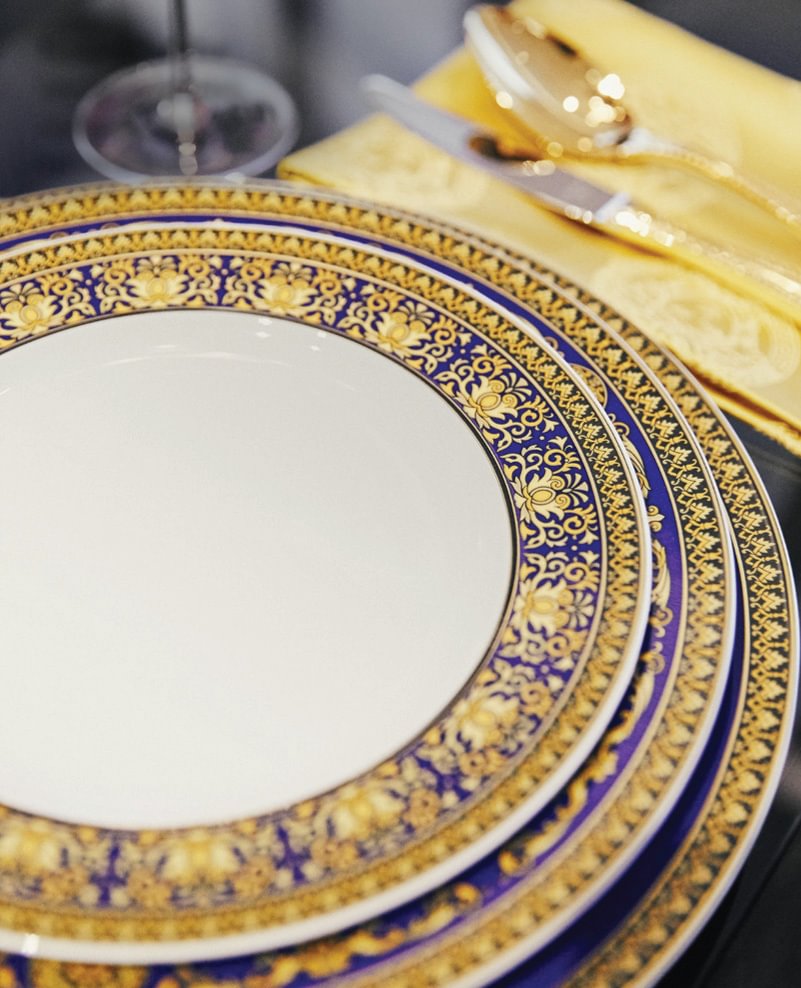 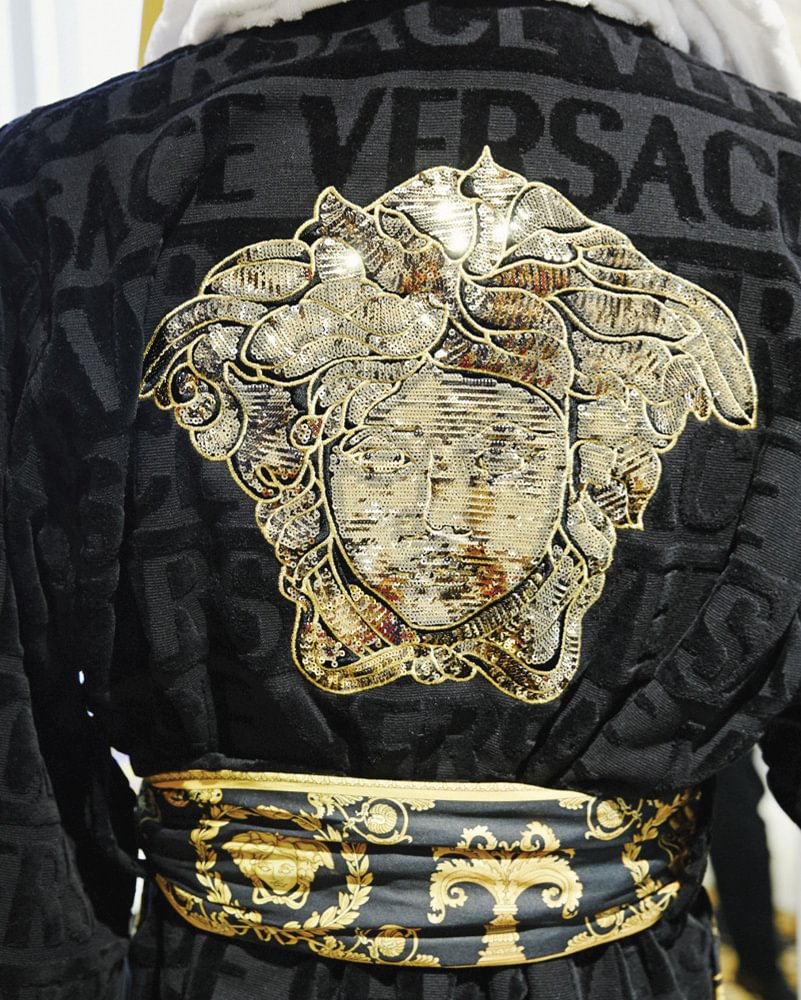 A Medusa head on the back of a Barocco bathrobe. (DONATELLA VERSACE: GETTY IMAGES) A Shadov Chain chandelier is suspended above a Medusa dining table, chairs, sideboard, and armchairs, all from Versace Home. The painting is by Andy Dixon. In the living room, the sofa, tables, ottoman, pendants, pillows, and rug are from Versace Home’s Rhapsody collection. The candleholders are by Rosenthal for Versace.

Bikoff is the first interior designer to ever join forces with Versace. Given that she is a child of the 1990s with a flair for the theatrical, it was a match made in heaven. She was granted full access to the Versace archives and free rein to conceive whatever she liked. “Versace has always been the life of the party, and that is what I wanted to capture for the space,” Bikoff says of the pastel dreamscapes she designed. “I took previous Versace furnishings with a 1980s Art Deco revival vibe, mixed them with the brand’s more baroque pieces, and reimagined everything the Sasha way.” She had her selections redone in metallic and patent leathers, mirrored glass, lacquer, and other similarly sexy materials. “Who doesn’t love a mirrored tabletop?” she says. “That’s very Versace!”

As for Dixon, it was his cheeky, oversize version of the brand’s silken dress shirts (exhibited earlier this year at the Joshua Liner Gallery in New York City) that caught Donatella’s attention. For the palazzo, the artist produced both original paintings and massive shirt sculptures, which dangled from its stair hall and high-ceilinged spaces. “My work explores the sometimes uncomfortable yet inevitable entanglement between fine art and luxury,” Dixon says. “At its core, it is about the comedy of human desire.”

The colorful results were an embodiment of Versace’s past as well as a portent of things to come. Pleased with what Bikoff and Dixon helped to create, Donatella hopes to bring in other external collaborators in the future. “It will be something we will continue to explore,” she says. “It’s important to start a conversation on where we would like to bring the brand and how it can evolve—while staying true to its DNA.” Rhapsody table and Barocco wallpaper, all from Versace Home. For details, see Resources.
■