Living room The ‘Parliament’ lamp by Le Corbusier – reissued by Nemo – overlooks a ‘Nelson Marshmallow’ sofa by George Nelson from Herman Miller, as well as a ‘Chandigarh’ sofa and ‘Charpoy’ daybed, both by Doshi Levien for Moroso. The ‘Triple Lune’ mirror, a limited-edition piece for Galerie Kreo, the ‘Rabari’ rug for Nanimarquina and ‘Maru’ side table for B&B Italia are all also by the design duo Stockist details on p356 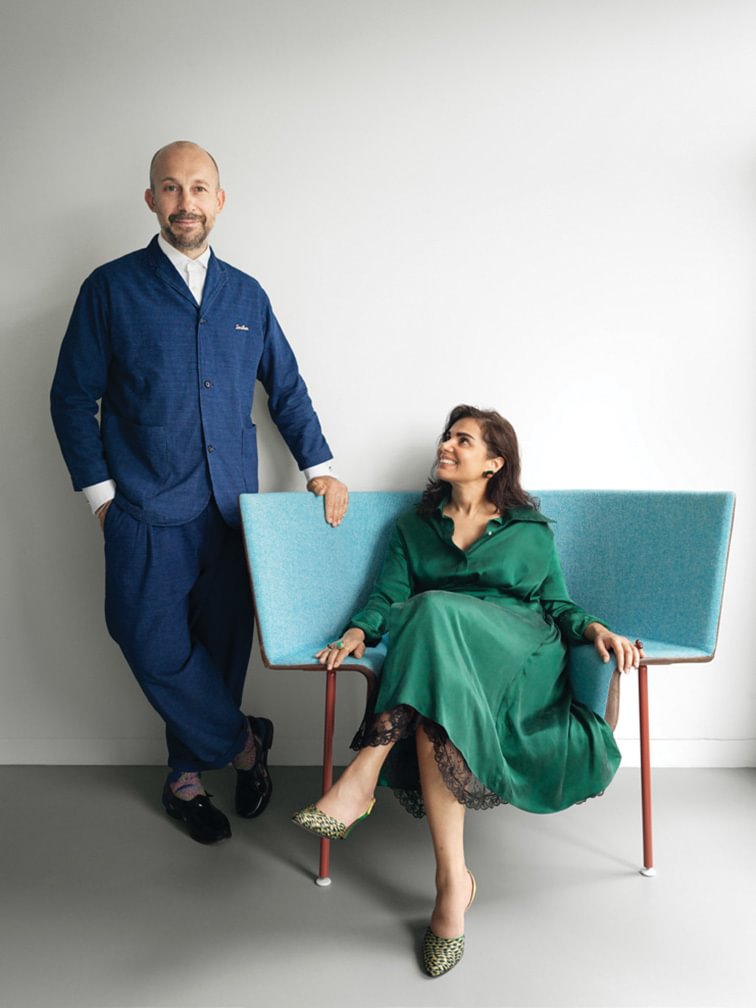 Portrait Nipa Doshi sits beside Jonathan Levien on the ‘Capo’ armchair, a piece the pair designed for Cappellini

It’s interesting how people can live in the Barbican and yet do up these beautiful Brutalist apartments like they are in a little country house,’ muses Nipa Doshi, one half of the multiple ELLE Decoration British Design Award-winning studio Doshi Levien, which she founded in 2000 with her husband Jonathan Levien. It’s a thought that has been bothering the couple since they and their 11-year-old son Rahul moved into a new home in the London landmark just a year and a half ago.

Upgrading from their old first-floor apartment on the same estate to a three-storey penthouse with views of the City should have been simple, but the pair’s dream home needed a lot of work, having previously been owned by an elderly gentleman with a penchant for beige carpets and drab magnolia walls. Both were removed immediately, but for the rest of the project, the designers took a more considered approach, living in the flat for a few months before deciding on the pared-back aesthetic that Nipa now describes as ‘the perfect canvas’.

‘For me, a home is the place where you accumulate the things you love,’ she adds. For this couple, that includes many of their own creations. Jonathan masterminded the kitchen and many of the cabinets that dot the apartment, as well as the bespoke bed. With a cotton mattress reminiscent of the ones Nipa slept on growing up in India, and an elevated profile that allows air to circulate underneath it, it’s true to the Doshi Levien aesthetic.

‘Generally, our pieces are not very big,’ points out Nipa, who explains that they are intended to be placed in spots where they can be viewed from all angles, like functional sculptures. That is true of the ‘Capo’ chair, designed for Cappellini, that sits in the living room, and the lights from their new self-produced ‘Earth to Sky’ collection, but it could also refer to any of the thoughtfully curated objects in this home. ‘There isn’t a hierarchy to the pieces we own,’ says Nipa, who sees just as much value in her collection of brass and copper vessels rescued from a recycling exchange in India as she does in classic designs, such as her teapot by Memphis Group founder Ettore Sottsass.

Whether relaxing on the roof terrace while gazing at the imposing Cromwell Tower or sitting in the lotus position on the rug in the living room playing music – Nipa is studying Indian classical singing and Jonathan plays the tabla (Indian drums) – culture and architecture are of equal influence here. These joint inspirations are best displayed in the miniature painting that she made in collaboration with artist Shammi Bannu that hangs in the living room (opposite). Set in the Le Corbusierdesigned Villa Sarabhai in Ahmedabad and featuring depictions of some of Doshi Levien’s designs, it presents the mythical love story of Radha, the gopi (milkmaid) who became the consort of the god Krishna. ‘It’s a world of indoors, outdoors, modernity and tradition,’ says Nipa, who could just as easily be describing the dichotomies at play in her own home. doshilevien.com A painting by Shammi Bannu, made in collaboration with Nipa, hangs above the ‘Riding High’ console by Doshi Levien for Galerie Kreo, which holds a sculpture of the Indian bovine-goddess Kamadhenu. A table lamp from the duo’s ‘Earth to Sky’ collection sits on the side table, which they also designed. The rug is by Peter Collingwood Stockist details on p356 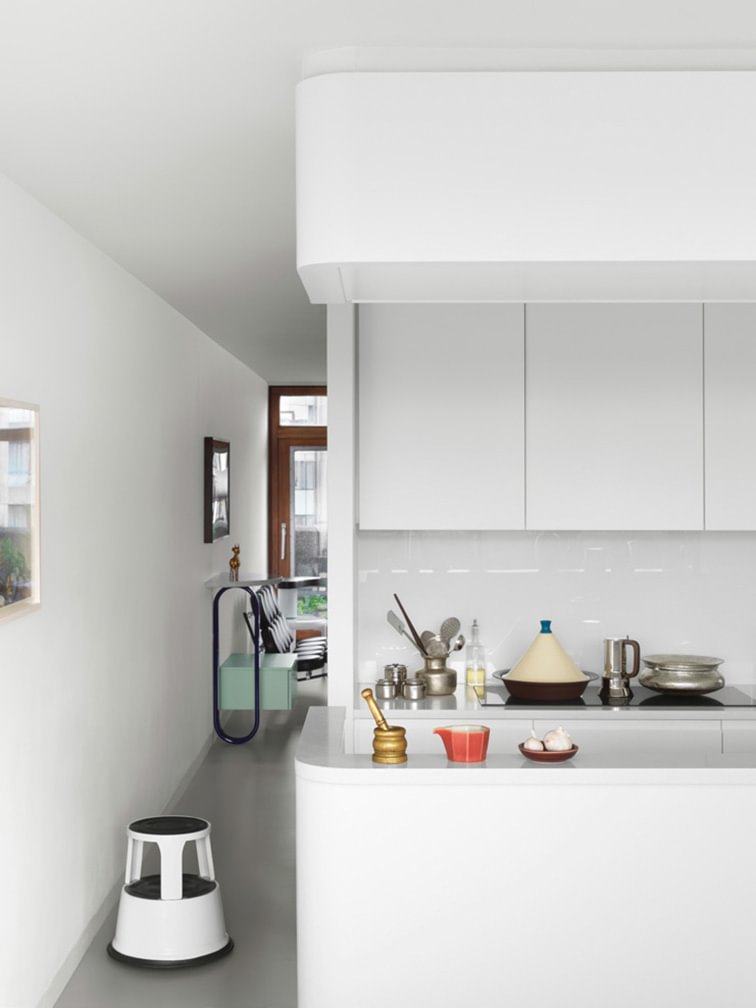 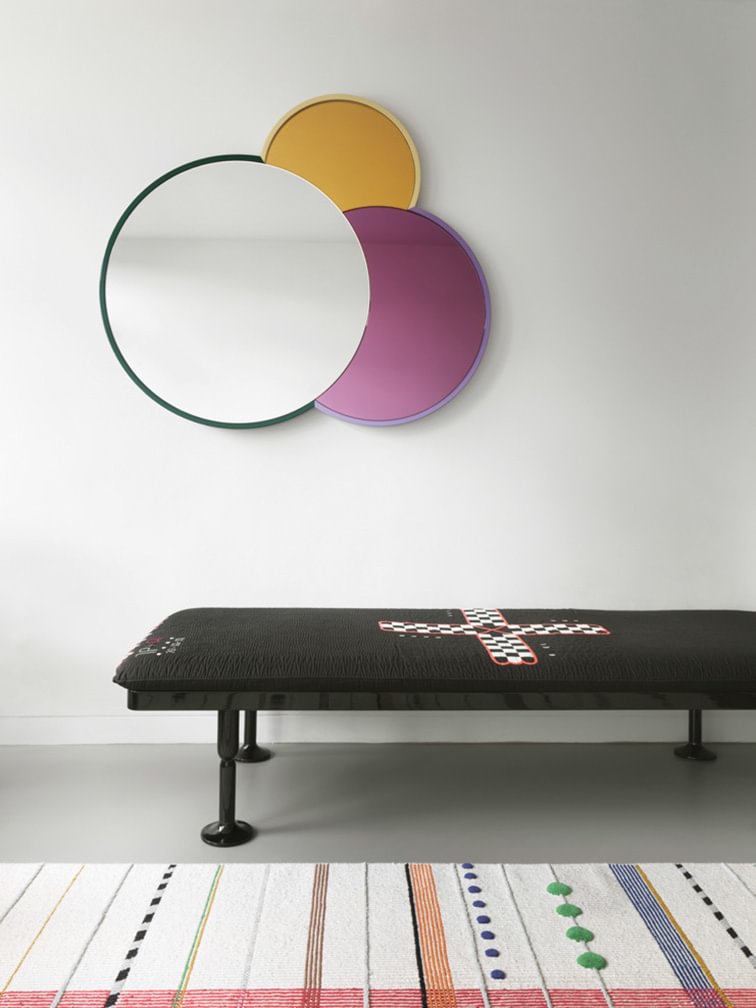 Dining room Swedish, Indian and Danish antiques sit on a ‘Haller’ storage unit by USM. The ‘Tulip’ table is by Eero Saarinen for Knoll, the chairs by Charles and Ray Eames are from Herman Miller, and the ‘Model No. 2065’ pendant light is by Gino Sarfatti for Astep Stockist details on p356 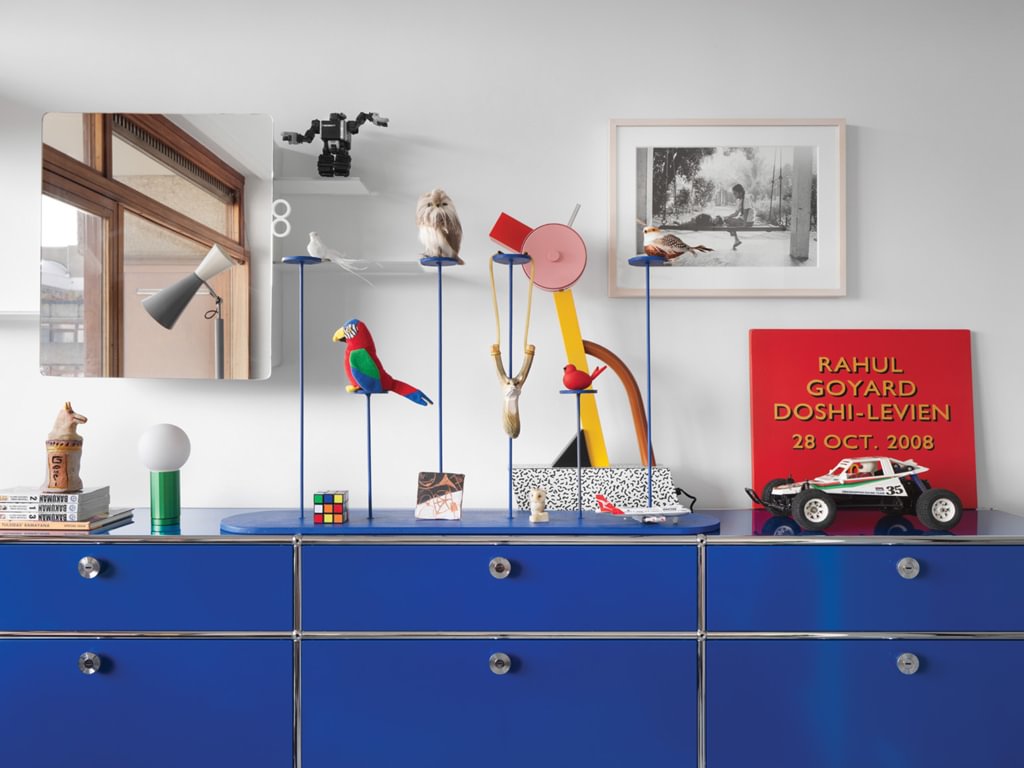 In Rahul’s bedroom, a USM ‘Haller’ storage unit displays a ‘Turn On’ lamp by Hay, a ‘Tahiti’ lamp by Ettore Sottsass – available at Memphis Milano – and a sign by artist Marianna Kennedy announcing his birth. The ‘Kali’ mirror cabinet by Doshi Levien for Authentics hangs above A ‘Do-Maru’ armchair by Doshi Levien for B&B Italia is placed beside the ‘Eames’ shelving by Charles and Ray Eames for Herman Miller. Behind, an ‘Atollo’ table lamp by Vico Magistretti for Oluce can be seen beside the mahogany staircase Stockist details on p356 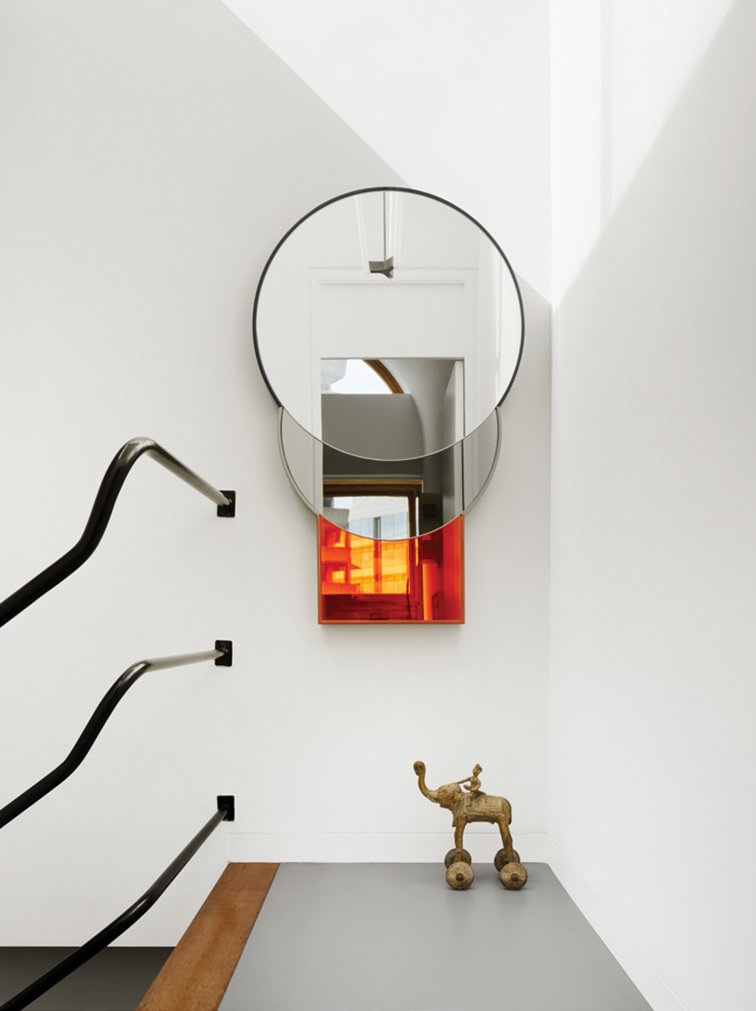 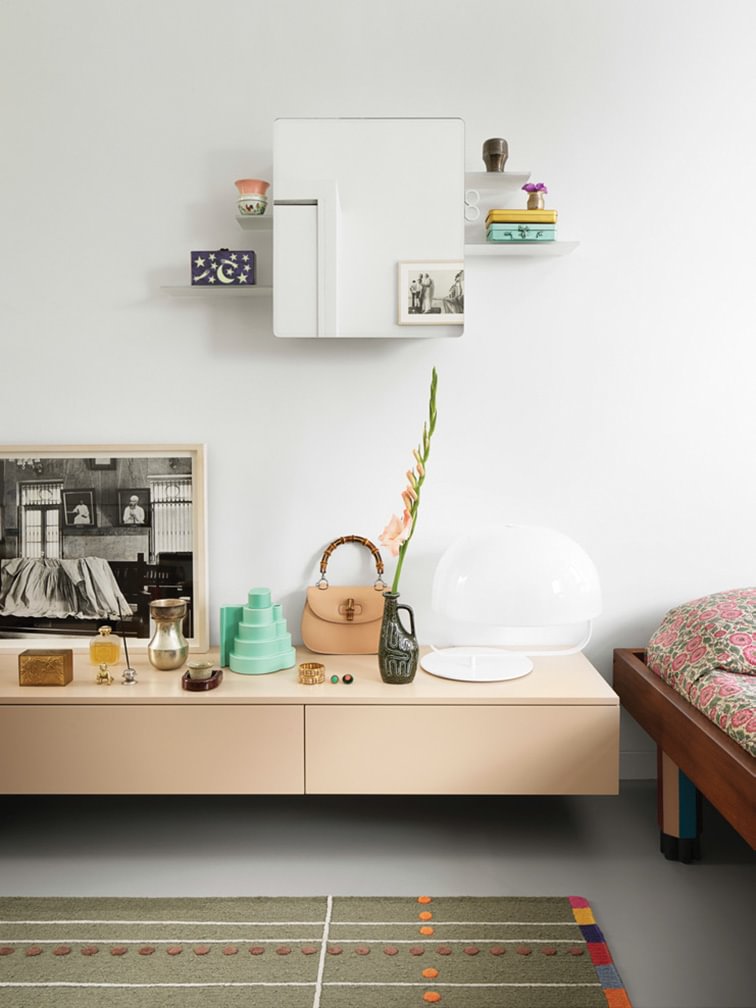 In the bedroom, the ‘Kali’ cabinet on the wall, the sideboard and the bed are all by the design duo, while the ‘275’ table lamp is by Marco Zanuso for Oluce

‘FOR ME, A HOME IS THE PLACE WHERE YOU ACCUMULATE THE THINGS YOU LOVE’ Bedroom A ‘VP Globe’ pendant light by Verner Panton for Verpan hangs above the bespoke mahogany bed. The large storage unit is by USM and the rug is the ‘Rabari 4’ design by Doshi Levien for Nanimarquina Stockist details on p356
■