COLUMNS
/ SIDETRACK
Reverse engineering
Why the return of ground effect, and maybe even fuel stops, is good news for F1
MIKE BLANCHET 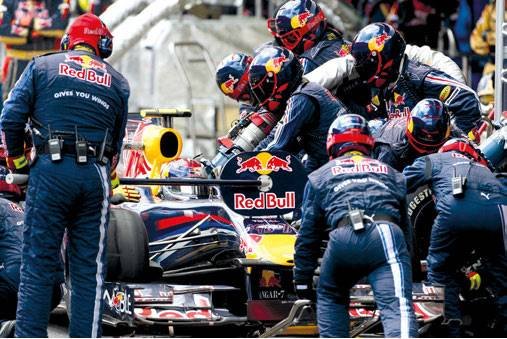 Refuelling hasn’t been a part of F1 since 2009, but 10 years on and Jean Todt has suggested the possibility of its return to help spice up the show

Hurrah! At last, after a very long time, the penny has dropped and today as I sat down to write this column came the happy news that F1 is finally adopting controlled ground-effect aerodynamics in its major rules revamp for 2021. Why this should have taken so long is beyond me, considering that flat-bottoms were brought in as a panic measure decades ago. However, time to look forward and for chassis designers and engineers this should be an exciting, if hectic, period ahead.

The opportunity to start with a clean CAD screen (drawing board for Adrian Newey) containing basically the dimensions mandated by the FIA and the fundamental need to accommodate driver, fuel and power unit must be unique in recent times. Concept rather than just endless iteration is surely a fresh and welcome challenge. Unless of course you’re the person ultimately responsible for getting it all done on time and within budget.

Over a period of time the ideas that emerge will coalesce towards the most obviously successful solutions, but for a year or two it should be really interesting technically, may shake up the pecking order a bit albeit short-term, and – most importantly – result in achieving the objective of allowing cars to race in close proximity without so much aero disturbance for the one behind. Now there’s rarely such a thing as a silver bullet and the combination of short braking distances and the nature of many of the tracks will still present overtaking issues. Nonetheless, a big step in the right direction.

This welcome change will not be without its problems, of course. Primarily, the matter of finalising the 2020 car designs this year and the development of these through next season while in parallel carrying out the massive amount of R&D, simulation and design of a whole new car. On top of which is the need for commencement of manufacturing to be ready for testing in early 2021.

Not to be overlooked either is the simultaneous move to 18in wheels with low-profile tyres, which one must assume will have a considerable effect overall on suspension geometry and spring/ damping concepts, as well as brakes and aero.

The reduced pitch-sensitivity nature of the shaped underbodies should work well together with the reduction in tyre sidewall flex but there are always unknowns (F2 teams, adopting similar wheel diameters a year before, may find themselves being befriended by F1 engineers who would normally shun their part of the paddock).

Then, of course, there is the impact on packaging of the complete powertrain, whether this remains in line with current regulations or becomes something different, plus all the associated cooling hardware. Inevitably all this will work considerably in favour of the better-resourced teams. The possibility of a moratorium on the introduction of new parts after, say, mid-season next year should be considered to try to mitigate this advantage. It’s difficult to see how there would be any development relevance to the all-new racecars required for 2021 and this would reduce the burden on the less well-financed outfits. Sometimes it pays to focus on what you’ve got to maximise every aspect of it rather than getting confused with too many new development blind alleys. A current example could be Haas F1; its erratic performances indicate that maybe it gets lost on set-up and tyre understanding, rather than having a fundamental design problem.

The ideas that emerge will coalesce towards the most obviously successful solutions, but for a year or two it should be really interesting technically

Drivers will also have to adapt to the different characteristics that these changes will introduce. However, I don’t see this as being too much of an issue, though, as top-class drivers by nature should be capable of soon getting to grips with any racing car, as long as it has a decent balance.

There’s another reason for optimism about the future of F1, too. FIA President Jean Todt has given me the impression of a dead hand as far as F1 is concerned since he was first elected, being most concerned it seems with safety, on road and track, and having an obsession with motor racing’s relevance to automotive industry technology. To the extent, in fact, that I wonder if his political ambitions extend beyond motorsport.

With the above in mind, I’m happy to learn that Todt is now actively promoting fuel stops in F1, something which I’ve often banged on about. I really fail to see the logic in humping probably 70kg of dead weight around at the race start, in cars which are already gross and when tyre preservation plays such a vital part. Let’s get away from drivers having to lap five or six seconds off qualifying pace. While fire is virtually unknown now in crashes it’s not impossible for it to happen, so the less fuel onboard the better. Much more relevant is a reduced-size fuel cell which will allow further weight reduction by virtue of a more compact tub. This should assist in providing the space required for the 2021 underbody tunnels. Arguments against, based on potential danger to pit crews and added cost of kit, don’t stand up to – look to WEC practice and experience if in doubt.

I haven’t touched upon engine/PU regulations so far, they look unlikely to change much. All I can say is that current hybrid PUs are highly complex and expensive – so it’s no surprise that new manufacturers have failed to join Honda in F1. Given the initial humiliation and the subsequent effort expended by the automotive giant in achieving a competitive level, similarly with Renault, it’s even less likely to happen. The only exceptions I can foresee would be Porsche and Audi, because of their LMP1 experience, their relevant resources and their understanding of racing. With so much chassis revolution to handle, maybe a change to less politically-correct and simpler powertrains could be stage two in the revamp of F1. In 2023, after 10 years’ return on investment since their instigation? ■