VLife ART
Behind the smile
Beneath the EXUBERANT colours and CARTOONISH feel in the work of this group of artists lies DEEPER emotions.
By Freya Herring 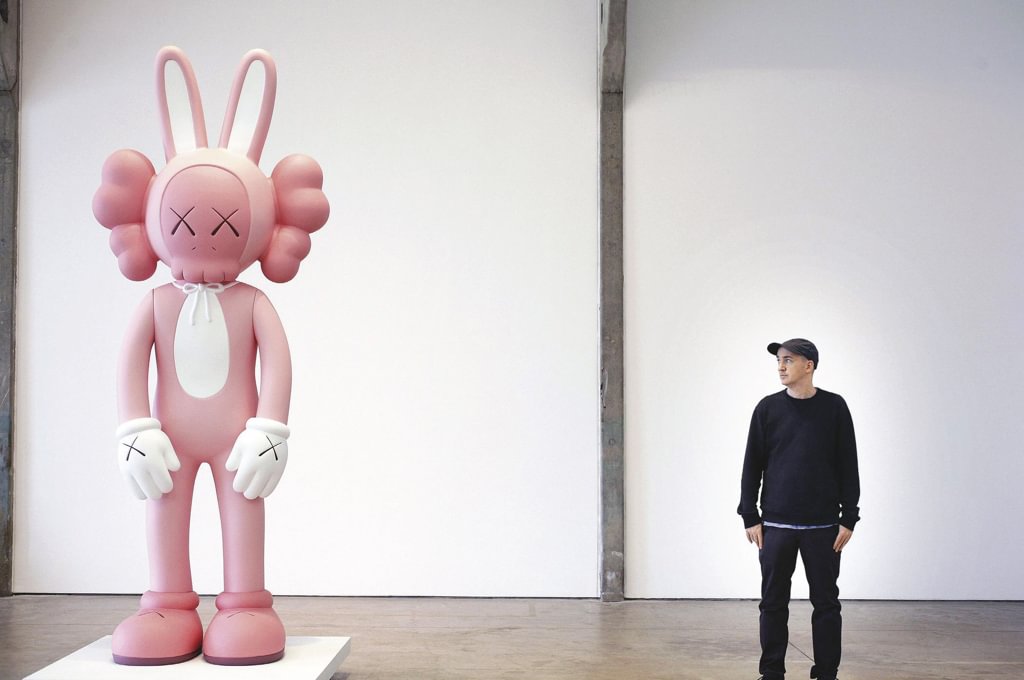 the artist Brian Donnelly (aka KAWS) with one of his sculptures, Accomplice (2010), inspired by the rabbit Frank in the 2001 film Donnie Darko, at an exhibition of his work at Yorkshire Sculpture Park in the UK. (PHOTOGRAPHER: GARY CALTON/EYEVINE/AUSTRALSCOPE)

Artists have been alerting us to beauty before sinking us into despair for centuries. Think of Andy Warhol’s colour-drenched, seemingly celebratory 1967 Marilyn Monroe series — look what our image of the woman did to her. Street art, too, changes tack halfway through the viewing process. In its most basic form, public tagging at first appears audacious, but graffiti artists exist at the peripheries of society: by writing their name on a wall, they make themselves, and their very exclusion, visible.

Back in the ’90s, this is how New York artist KAWS (real name Brian Donnelly) first made his mark — by defacing adverts on the city streets; adding cartoonish faces to the perfume models of bus-stop ads, wrapping them in tentacles. Since then, he has collaborated with Nike, Marc Jacobs and Kanye West. More recently he worked with Dior on its 2019 spring/summer collection and with Uniqlo on its summer 2019 line. This year, one of his paintings sold for around US$14.8 million at Sotheby’s. He hasn’t been mainstream in Australia, though, until now. In September, a major show of his work comes to the National Gallery of Victoria, entitled KAWS: Companionship in the Age of Loneliness.

The new show features more than 100 works by KAWS, encompassing painting, sculpture, work on paper and limited-edition toys, and that’s not including ephemera like photographs and sketchbooks. “Brian has worked as an illustrator, in animation, in fashion, in street art and the gallery space,” says Simon Maidment, the show’s curator. “There’s an equivalence for him across all of these disciplines; he has a very non-hierarchical view of how to engage in the world creatively.”

His work, particularly his cartoonish motifs, lures its audiences in with warm, fuzzy, nostalgic tropes and characters that feel safe — the Smurfs, The Simpsons, SpongeBob SquarePants, Sesame Street, Michelin Man — and inserts elements of tragedy like crossed-out eyes and solemn cuddles. Most of all there is a loneliness expressed in his work. “He brings together this childlike quality with iconography around death and mortality,” explains Maidment. “The tension and slipperiness between these things is at the heart of his artistic practice.”

KAWS most acutely expresses this with a character known as Companion. A kind of mutated version of Mickey Mouse, he is often depicted head in hands, lost in melancholy. The NGV has commissioned a new seven-metre-high sculpture of Companion for its permanent collection. Entitled Gone, he is seen holding a character in the pose known as ‘pietà’. Like Michelangelo’s sculpture of the same name, the clutched body is dead; Companion is alone. “KAWS’ sculptures, at times on a monumental scale, are very much the embodiment of contemporary anxieties, fears and grief,” says Maidment. “Heavy emotions, but embodied in these almost cute, cartoonlike figures.”

By securing our attention via nostalgia, KAWS highlights our collective loneliness in the social media age. Like the dead character in Gone, our innocence and our relationships have been taken from us; the tragedy being that we did this to ourselves. 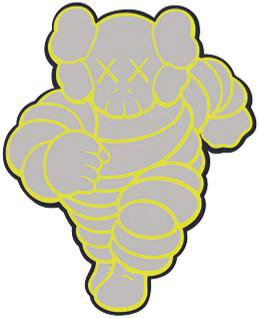 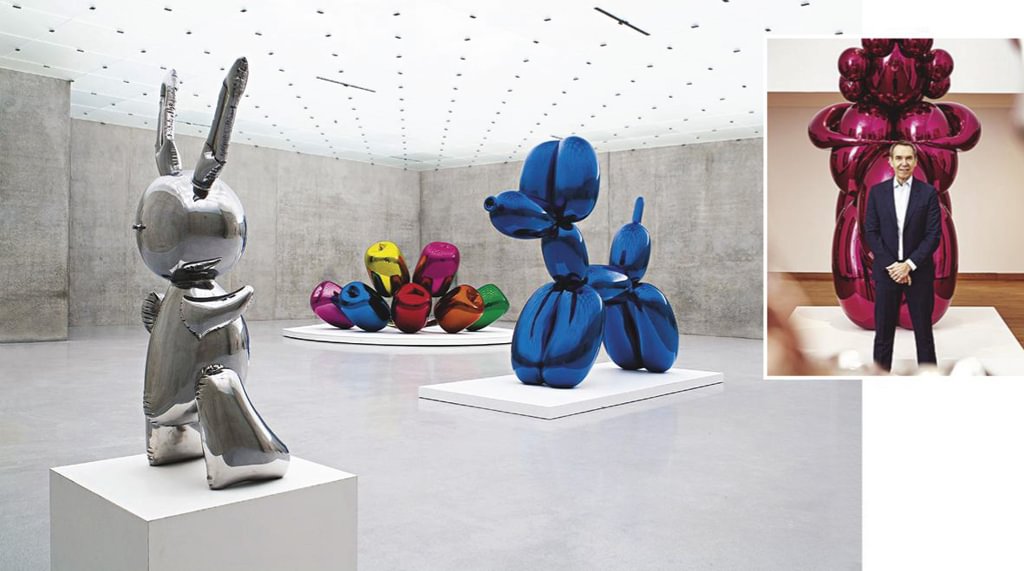 “Both Koons and KAWS are interested in the history of art, and both explore ideas around beauty,” says Maidment. “In KAWS’ case that’s often about fashion — he pushes the beauty myth to the point of kitsch, or to collapse or vulgarity. So there’s a kind of perversity in both of their practices by pushing something to the point of the uncomfortable.”

It’s this perversity that, in Koons’ case, is often understood to be celebratory — but is it? We can read Koons’ work to be rejoicing in commercialism, sure, but in its extremis — giant puppies! Michael Jackson’s pet chimp, Bubbles! Sexy (subservient) women! — is the artist really celebrating these ideas, or is he asking us to check our prejudice? And how do we, the audience, participate in this culture? 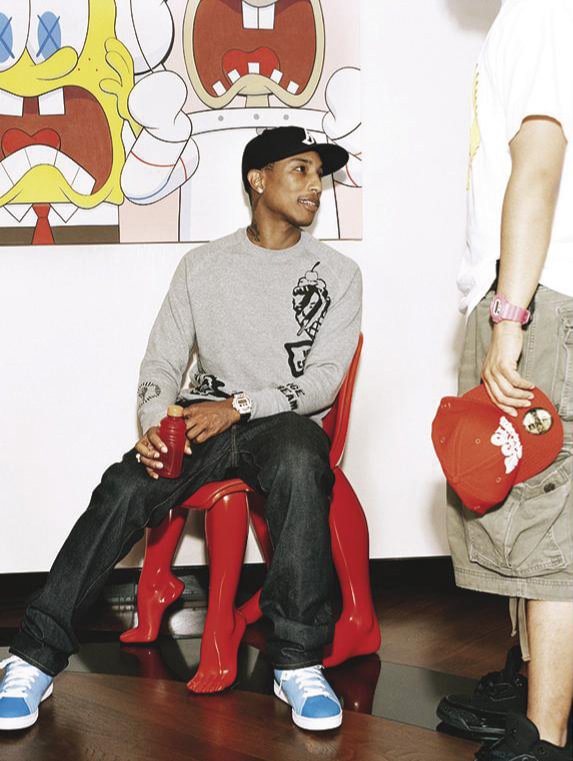 Musician and designer Pharrell Williams taking a seat in the Perspective chair he designed in collaboration with Domeau & Pérès.

When you think of Pharrell Williams, you may see a big hat but you probably think of his 2013 single ‘Happy’, the Oscar-nominated song from Despicable Me 2. This joyful rhetoric that Williams puts out isn’t necessarily because he’s happy with the way things are. Through joy, Williams is seeking, but not necessarily finding.

Like KAWS, Williams crosses boundaries in terms of his artistic output. He’s a rapper, singer, songwriter and producer, but he also works in fashion with his brands Billionaire Boys Club and Icecream, and his collaborations with Adidas and Louis Vuitton. He has designed furniture with Domeau & Pérès, curated exhibitions and has collaborated with Takashi Murakami on sculpture. “Pharrell is a big collector of KAWS’ work — in fact he was the one who introduced KAWS to his first gallerist, Emmanuel Perrotin,” says Maidment. “Pharrell is lending some key works to our exhibition.”

Williams promotes issues with such positivity it can be difficult to see them as protests. Take Girl, an album, exhibition and unisex perfume all celebrating not female sex, but female imagination. He offers an alternative; a salve, almost like a form of passive resistance. And if there’s an ointment, there’s an injury.

“Both Koons and KAWS are interested in the history of art, and both explore ideas around beauty. In KAWS’ case that’s often about fashion — he pushes the beauty myth to the point of kitsch, or to collapse or vulgarity”
SIMON MAIDMENT 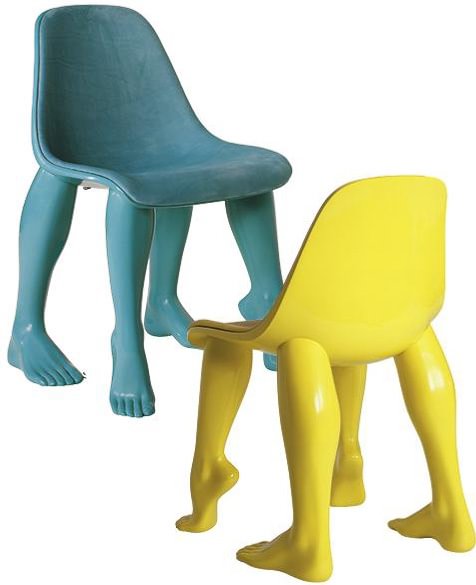 In 1957, the granddaddy of conceptual art, Marcel Duchamp, stated, “Art may be bad, good or indifferent, but whatever adjective is used, we must call it art, and bad art is still art in the same way as a bad emotion is still an emotion.” Like KAWS, Japanese artist Takashi Murakami works across mediums, in particular with animation and fashion houses, alongside his fine-art practice. While working with Louis Vuitton, he even inserted a number of ‘LV’ monograms into his paintings — which was divisive, to say the least, in the art world establishment. But maybe that’s the point: Murakami is breaking down the barriers between high and ‘low’ art. His work is colourful, populist and accessible, playing with ideas around manga and anime, and employing cutesy imagery like smiling flowers and psychedelic, cartoony monsters. Having established the postmodern Superflat movement in Japan in 2001, Murakami examines the concept of flatness in traditional Japanese iconography, while also reflecting the shallowness of consumerism, which he both celebrates and annihilates in the same breath. Duchamp would have loved it. Rabbit (1986) by Jeff Koons. Artist Takashi Murakami with his signature smiling flowers, which have graced skateboards, sneakers and the Palace of Versailles.