ARRANGED ON THREE DENSE CENTRAL STACK LEVELS AND SURROUNDED BY LIGHTFILLED READING AREAS, THE LIBRARY’S COLLECTION OF 125,000 FINE ART VOLUMES IS VISIBLE AT A GLANCE IN ALMOST ITS ENTIRETY

‘Knowledge is something which doesn’t have a weight,’ Wolfgang Tschapeller says. He’s describing his design for the Mui Ho Fine Arts Library at Cornell, a renovation that opened up an airy space in the university campus’ historic Rand Hall. It is organised around a singular concept: a series of stacks made from metal grate and hung from the ceiling. The books appear to be almost floating, ephemeral.

‘There’s something about the weight and position of the books and stacks; just like knowledge itself, it’s essentially immaterial.’ It’s heady stuff, but the Austrian architect, who graduated from the Cornell School of Architecture and returned in 2014 with a commission to renovate this library, does not shy away from a conceptual approach.

Tschapeller’s intervention is part of the equally heady complex that makes up the College for Art, Architecture and Planning: a constellation of tight-knit buildings that also includes Milstein Hall, the architecture school designed in 2011 by OMA, masters of the powerful, concept-driven approach.

The library building – an existing yellow brick structure from the 1910s – is flush with Milstein Hall. The two are connected through an OMA-designed volume, whose low ceiling covers an open pathway that runs from the parking lot to the Milstein and library entrances. Its narrow darkness is just compelling enough to make walking into the renovated library – centred around one massive open room flooded with daylight and kept temperate courtesy of sophisticated climate engineering – feel like a moment of weightless expansion.

That sense of expansiveness is a fitting new life for the old building, which had fallen into disrepair. Tschapeller’s changes were initiated to both rehabilitate the culturally important structure, and allow for the kind of state-of-the-art technological offerings key to contemporary libraries. As well as, of course, storing books.

Young scholars are encouraged to take libraries seriously, to feel the importance of what they’re learning. This library, though, teaches them to have a little levity. For starters, there are the three levels of stacks, constructed from panels of gridded metal and suspended in mid-air. A wide space beneath takes what is sometimes referred to by architects as ‘dead cat space’ – the often useless spatial pockets that can appear in even the most carefully constructed building – and gives it purpose. Meant to draw the attention, ‘it’s a space which is designed to be seen from a relaxed sitting position’, Tschapeller says. It is precisely the absence of typical library motifs, such as shelves firmly secured to the ground, that makes this interior such a brave addition to the architecturally developing campus.

The only other library Tschapeller has designed is the Sigmund Freud library in Vienna, and that experience inspired Tschapeller to think more deeply about library science. His firm briefly proposed organising books accidentally, ‘like a system of serendipity,’ in which books were ‘placed according to the liking of the people who are reading.’ But the students at Cornell needed something a little bit more practical, and so, while the books do hang, they’re shelved and organised according to the standard Library of Congress Classification system. The building also includes private workspaces, a roof terrace/exhibition space that overlooks the local landscape, a reading room, a fabrication facility, a seminar room and staff offices. Balancing the design of the spaces and their varying requirements of technical performance was not an easy feat. 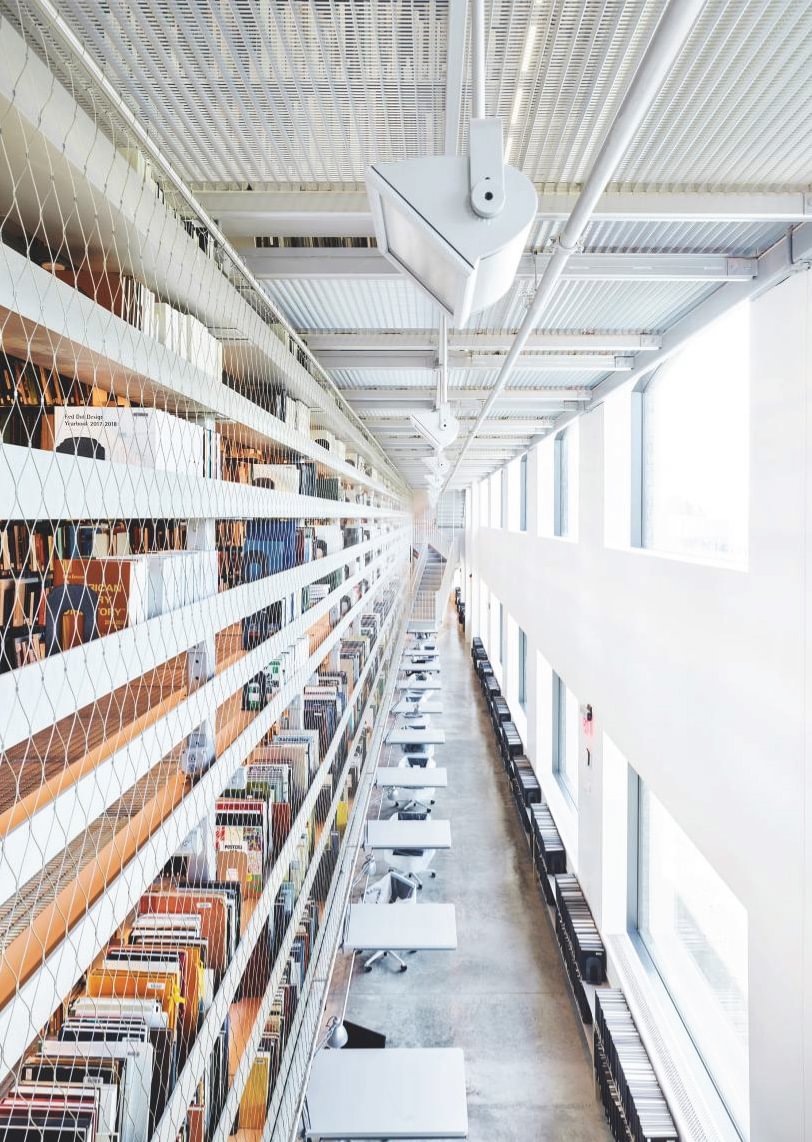 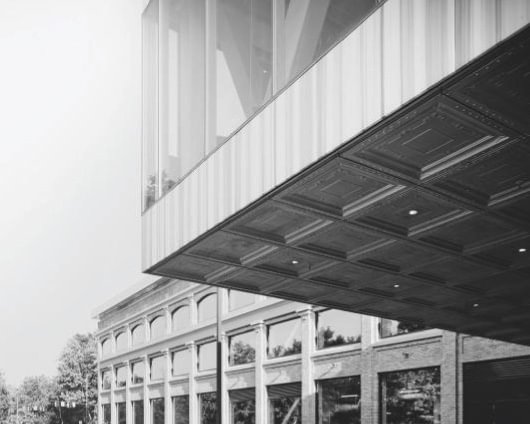 AN OMA-DESIGNED VOLUME WITH A STAMPED ALUMINIUM PANEL CEILING, AND THE YELLOW-BRICK RAND HALL, TRANSFORMED BY TSCHAPELLER INTO THE LIGHT-FILLED LIBRARY

Enter Transsolar, the climate engineers brought in to provide energy efficiency and ensure comfortable working conditions. Because the architect’s emphasis was on light, transparency and weightlessness, and the windows that bring warm sunlight into the space were such a crucial element, sunshading and visible ductwork weren’t ideal. So Transsolar installed discreet exhaust systems to push out hot air that would otherwise stagnate, and radiant flooring that heats in winter and cools in summer.

It’s an unusual project, but that’s part of the point. Making a strong theoretical stance in a smaller building next to a sprawling OMA complex would be a challenge for any architect, but it’s one that Tschapeller fully embraced. Asked whether he was worried that skirt-wearing people might be deterred from heading up the staircases to the higher, gridded levels, the architect acknowledged that yes, they had discussed this, but ultimately emphasised his dedication to the concept over, perhaps, ideal use. ‘The focus of the mezzanine shelving system is the books, not the humans or readers,’ he says. ‘The books are the main presence and humans are in between them’.