THE HOUSE COMPRISES A SERIES OF FIVE CONCRETE BLOCKS, A NOD TO LOCAL BAHIAN HOMES, SHELTERED BENEATH A VAST PERGOLA THE PERGOLA’S EUCALYPTUS STICKS CAST CHANGING SHADOWS, WHILE WOODEN SHUTTERS ALLOW THE INTERIORS TO BE FULLY OPEN. IN THE LIVING AREA ARE A ‘C11’ SOFA, BY MARCUS FERREIRA FOR CARBONO, AND (AGAINST WALL) A SERIES OF SCULPTURES BY PHILIPPE HIQUILY

A decade ago, the Frenchman Serge Cajfinger spotted Marcio Kogan’s Paraty House in an issue of Wallpaper* (W*131). He was so smitten, he told another magazine (it’s allowed) that he dreamed of having his own house built by the Brazilian architect some day. By chance, Kogan saw this article, and wondered, ‘Who is this guy?’

Cajfinger, 64, founded fashion brand Paule Ka in 1988. By the time he sold a majority stake, in 2011, the company had annual sales of around €40m. Cajfinger had spent the first years of his life in Brazil and now he wanted to retire there full time, to build a casa na areia – a ‘house on the sand’. When he finally contacted Kogan, in 2015, the architect’s first response was, ‘I’ve been waiting for you.’

Kogan advised him to buy a plot near Trancoso, a low-key, beautifully preserved seaside town in Bahia province, home to a mix of locals and international jet-setters. There was very little beachfront land for sale, but Cajfinger got lucky and learned that a friend of a friend was selling a 6,427 sq m plot by the sea. He sold his Quai Voltaire apartment in Paris and bought it.

He and Kogan are a perfect pair, sharing the same passion for 1950s and 1960s modernism. The architects of Kogan’s firm, Studio MK27, work in close collaboration on each project, and this spirit extended to include Cajfinger, who considers himself a frustrated architect. ‘I was very directive,’ he says. ‘I knew what I wanted and didn’t want.’

The architects distributed the living areas throughout five separate concrete blocks, a reference to the small cottages around Bahia. For a seamless connection between indoors and out, the boxes are grouped beneath a porous structure, a pergola made of eucalyptus sticks on a glue-laminated timber frame. ‘If it’s raining,’ says Kogan, ‘you take your umbrella to go to another part of the house.’ The house is raised 40cm off the ground, to enhance ventilation and the view while keeping snakes and lizards out. Folding wooden shutters control light, air flow and privacy. A permanent breeze provides natural ventilation, while collected rainwater is used to irrigate the garden. 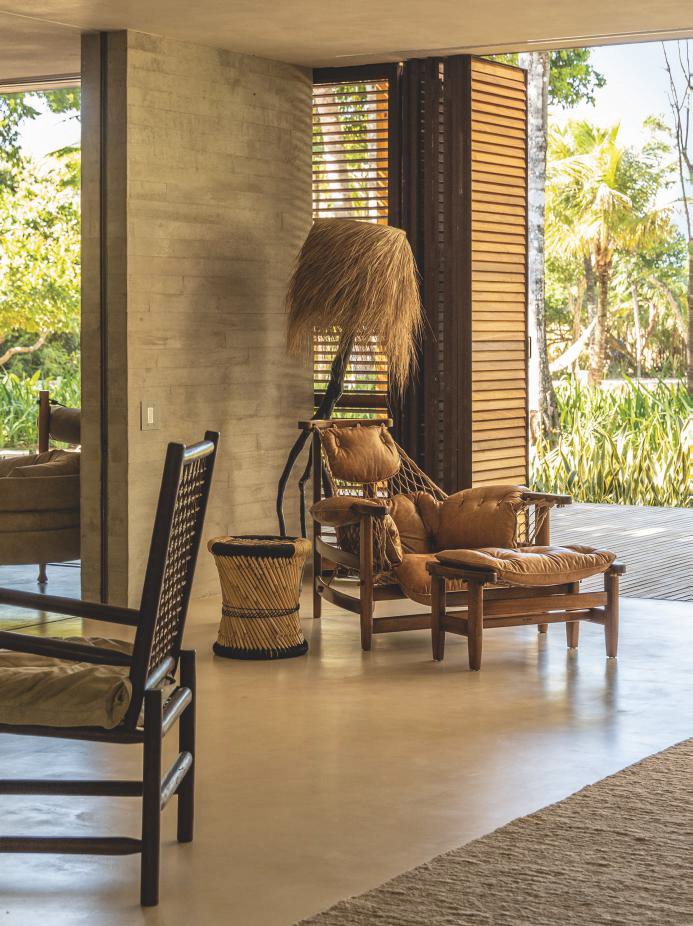 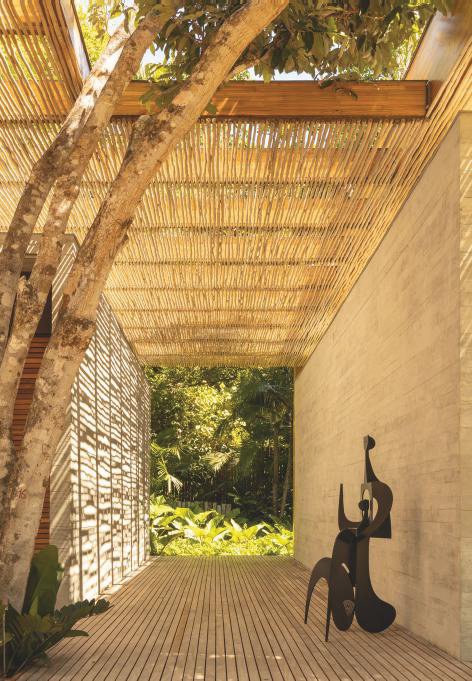 A PHILIPPE HIQUILY SCULPTURE IN AN OPEN CORRIDOR BETWEEN THE CONCRETE VOLUMES. TREES ARE ALLOWED TO BURST UP THROUGH THE RAISED FLOOR AND THE PERGOLA ROOF

‘Serge is a sophisticated guy. He’s probably more perfectionist than we are’

By law, the house had to be built at least 60m from the water and 10m from the road. It is long and narrow, so that all the rooms except the bathrooms face the sea. The actual living area occupies 328 sq m (including four guest bedrooms), while the pergola expands the surface area to 881 sq m.

Kogan, an erstwhile movie director, always brings his cinematic approach to architecture, with houses that tend to be horizontal – or as he says, ‘widescreen’. In this case, it is ‘very wide’. The pergola also adds drama, filtering the sunlight and casting shadows in graphic lines that change throughout the day.

The garden is another work of art, designed by Isabel Duprat, a disciple of the renowned Brazilian landscape architect Roberto Burle Marx. It is lush and tropical, with palm trees, pineapple plants, and winding sandy paths leading to the ocean. Duprat did not remove a single tree – in fact, 100 more were planted, and some seem to burst through the pergola roof. The garden’s organic curves extend to the swimming pool, and contrast with the rigorous geometry of the house. The effect reminds Cajfinger of glamorous images from the 1950s by photographer Slim Aarons.

The man who made his fortune designing clothing now spends his days barefoot and in shorts. He has never been happier. ‘It is rare to realise one’s dreams,’ Cajfinger says. ‘This is the house of my dreams.’