When McLaren targeted a return to Formula 1 domination with Honda ahead of the revival of its famous partnership in 2015, it would have been inconceivable that the Japanese manufacturer would have to wait until 2019 to taste victory again. Oh, and it would be with Red Bull, not McLaren.

Honda’s path to redemption, first by rebuilding its respectability in 2018 with Toro Rosso and then by returning to winning ways this year, is an expensive feel-good story.

Its underestimation of the complexities of the V6 turbo-hybrid engine era and its incompetencies compared to rivals were brutally exposed in three dismal seasons with McLaren, and it became hard not to sympathise with Honda. After all, it was not the brash half of that relationship. Yet through fiery failures, an insult about a “GP2 engine”, a public and embarrassing divorce, Honda’s position remained quiet, dignified and resilient.

Victory in the Austrian Grand Prix, its new partner’s home race, ended a 13-year drought and triggered a release of pent-up emotion. Honda refused to take the easy way out and this was its reward.

One victory does not justify years and hundreds of millions of dollars in investment, though. So Honda’s breakthrough needed to be part of something bigger. Red Bull team boss Christian Horner always said this was going to be a “transitional year” for the team. It knew Honda was still not ready to fight Mercedes and Ferrari. But as Max Verstappen added two more wins, and two pole positions, in another season of Mercedes domination, both parties can reflect on a very positive first season together.

Reliability has been at the heart of Honda’s progress, aided chiefly by the late-2017 arrival of Toyoharu Tanabe from its IndyCar project as technical director, and the return of technical guru Yasuaki Asaki to head up research and development work. Tanabe is a stickler for reliability. Red Bull did not make it through the year without grid penalties, but extra engines were introduced strategically to prevent failures, not a response to expensive explosions. Perhaps that seems like splitting hairs, but the progress was real. Honda insists its product is capable of lasting long enough to complete a full season within the engine limits. Verstappen also points out that Red Bull has not retired because of a single Honda-caused problem all season. 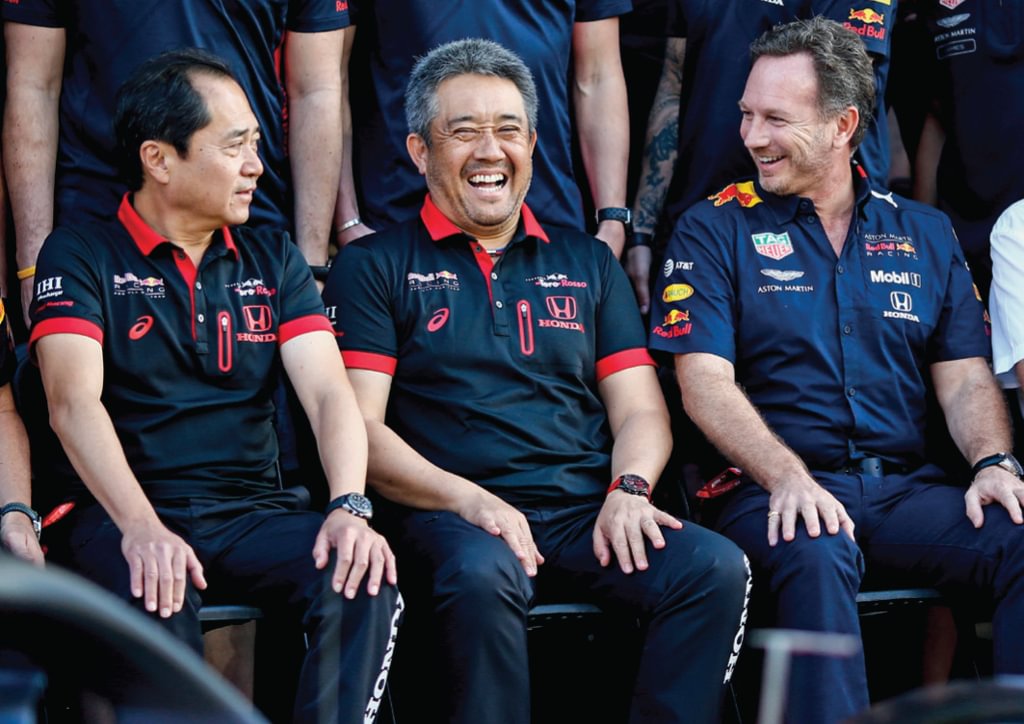 “They made a huge step forward,” says Verstappen. “The engine changes were all because of performance upgrades. We knew we had to start at the back, or drop five or 10 places, but it was all for performance that would help us over the races afterwards. It was not linked to an engine just being worn out, so that’s also a good thing for next year.”

Core to this was an MGU-H upgrade introduced in late 2018 and a new turbocharger that arrived for June’s French GP, where Honda’s Spec 3 made its debut. To put that into perspective, manufacturers tend to only introduce their second-spec engine one or two races before that round. Honda’s first upgrade, one focused on reliability over performance, appeared at the fourth round of the season.

The Spec 3 was significant, not only because it broke the monotony of a slightly underwhelming start to the season. Apart from a confidence-boosting podium on the partnership’s debut in Australia, Red Bull and Honda found themselves third-best most of the time, although Verstappen stole a podium in Spain and fought Hamilton for victory in Monaco. The Spec 2 Honda in Azerbaijan was not a game-changer. Spec 3 was, aided by Red Bull finally making a significant breakthrough of its own that made the chassis more compliant. The net result was Verstappen’s dramatic victory in Austria.

“Initially I felt it’s difficult to get a win, especially early in this season,” admits Tanabe. “In the middle of the season the team improved very much the chassis side, and our engine improved as well.”

The new turbo completed a pair of technical breakthroughs driven by collaboration with Honda’s jet-engine division that finally allowed the F1 department to crack the code to building reliable, high-performance, high-rotation turbines. That is vital to the performance of the MGU-H and turbo independently, but also to the universal application of the entire engine.

Honda was further rewarded for going on the offensive this year with an aggressive development schedule that also allowed it to bring in a Spec 4 engine after the summer break. That afforded it an extra engine upgrade compared to its rivals, at the expense of grid penalties it knew it would have to take anyway.

It would be wrong to say Honda is now a match for Mercedes, but Verstappen reckons the team is “very close” – closer than ever in qualifying trim, and a deficit that is borderline negligible in the races. It was only Ferrari’s massive and heavily scrutinised step in qualifying speed after the summer break that appeared to disrupt the momentum Red Bull and Honda had built. But look a little closer and you can see that it was still there.

“We were also very competitive at Monza, which you wouldn’t expect,” Verstappen noted. “It was not all that bad. We had to take engine penalties, so starting from the back the best you can do is fifth and it doesn’t look like an amazing result.

“We made a mistake with the set-up in Singapore. Then Suzuka was always going to be a bit of a tricky one because you can nail the set-up for qualifying or not and immediately it can be a big difference. I was not very happy with the set-up we had in qualifying, so it didn’t look amazing. But I had a good start and was virtually P3 but then I got taken out [by Charles Leclerc at the first corner]. It would have been a nice result as well for us. Then maybe you would be talking very differently about the last few races.”

“We have always been at the same level or above the target, which we’ve never had before”

Boosted by strong performance at high altitude, which in turn was aided by Honda’s turbo progress, by the end of the year Verstappen had revived his strong pre-summer-break form. He should have been on the podium in Japan and Mexico, where Hamilton unwittingly forced him off track. He was fastest in qualifying in Mexico and Brazil, and finished third in normal conditions in the US having challenged for pole on merit.

Those results thrust him to third in the championship, ahead of both Ferrari drivers. This may look like just another year of Red Bull scrapping for Mercedes’ leftovers. It won a similar number of races, scored the same number of poles and fought for the same third place in the drivers’ championship as it had in the last of its five title-less years with Renault. So what was different? Should this be trumpeted as a cautious success or a failure masked by sporadic glories? 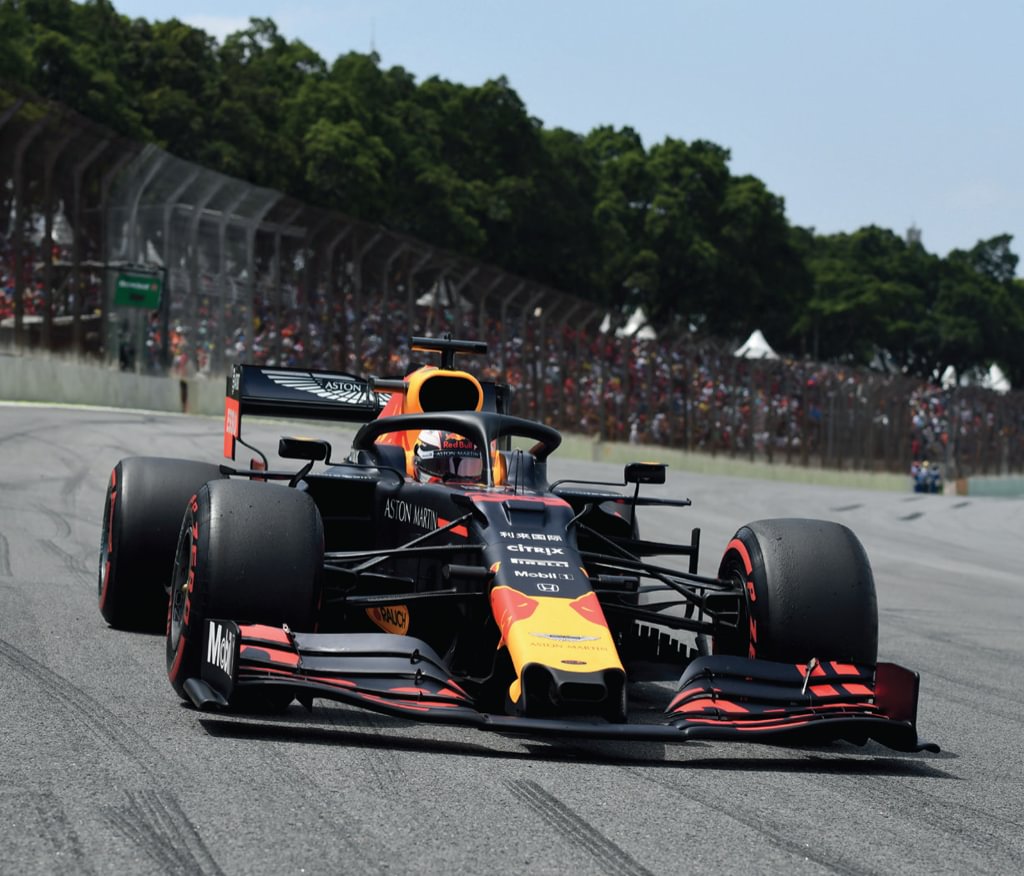 “It’s always difficult to judge if they’ve exceeded expectations, but what I think is very positive is that we had a target throughout the year and we have always been at the same level or above the target, which we’ve never had before,” says Verstappen.

“So that’s a good thing. They’ve always been very honest in what we would get and sometimes we would even be a little bit better. They’ve been working flat-out and the improvements we have made with the last two engines were big.

“I’m very happy. We lost a lot of points in the past because of reliability issues, which were both car and engine, and I think we have improved both sides. At the end of the day if you want to fight for a world championship you can’t retire on those kinds of things.”

That is the standard Honda must be held to because it is Red Bull’s ultimate goal. The team cannot expect to hold onto a talent like Verstappen without a realistic chance of achieving it. While Honda’s season was not good enough in terms of being a championship contender, that was never what 2019 was about.

It is easy to manipulate or interpret the statistics of Red Bull’s first season with Honda to suit a particular narrative. The bottom line is Red Bull considered Honda a better long-term bet than Renault and not a step backwards in the short-term.

If you believe the main players involved, the 2019 season also laid the foundation for a target Red Bull never achieved with Renault in this engine era: a fully fledged title bid. Perhaps the true value of this campaign will only be seen in 12 months’ time. 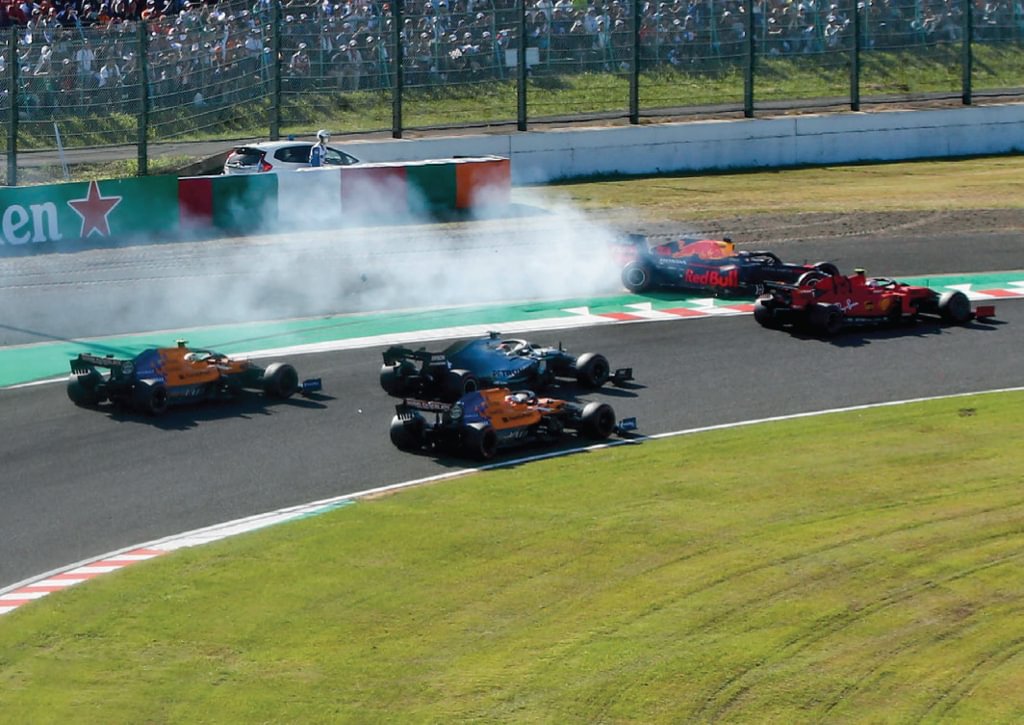 Leclerc collided with Verstappen on the opening lap at Suzuka (HONE)
■