Designer Emily Erlam has transformed a former car-parking area in front of the recently updated house into an elegant parterre that takes full advantage of the sunny aspect.

There’s a crisp, green geometry to the garden surrounding a 1920s-built house on the Wentworth Estate in Surrey. Tightly trimmed ivy covers the façade, with substantial columns of Asiatic star jasmine (Trachelospermum asiaticum) rising either side of the front door. A parterre of square beds planted with a mixture of evergreens, perennials and grasses floats on the gravelled garden. Flanking the central path that leads to the house, four umbrella-pruned mulberries form a guard of honour. 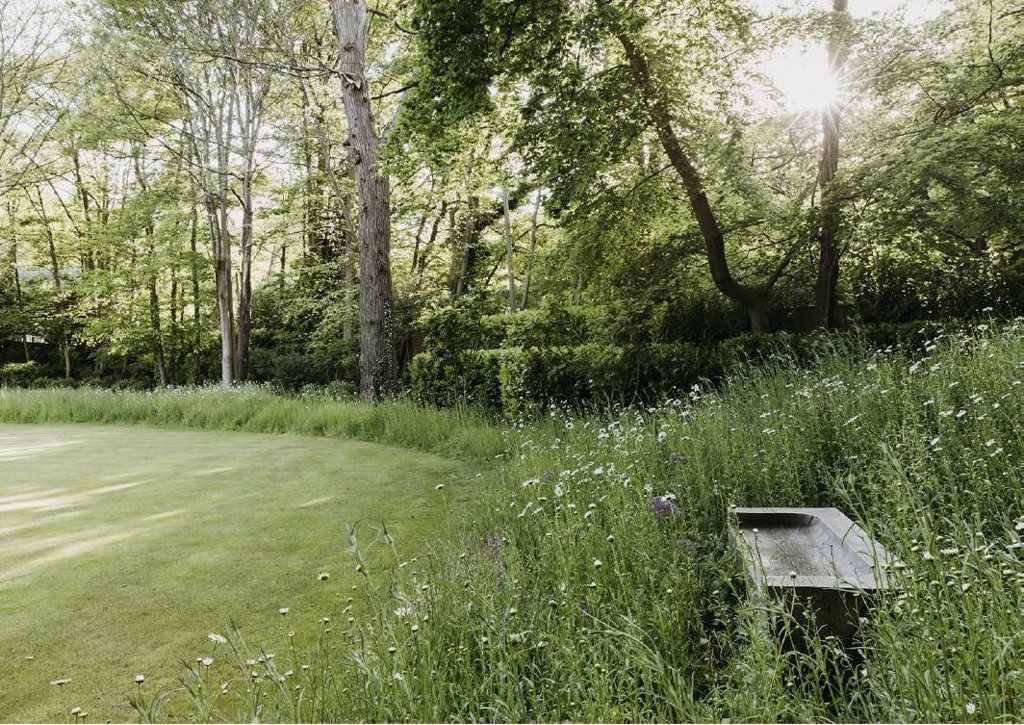 The simple bench tucked in among the wildflowers on the edge of the lawn is one of two that Emily designed and had sculpted out of seasoned oak heartwood by the Garden Trellis Company.

It was very different six years ago when designer Emily Erlam was first asked to reconsider the garden. The house sits on a well-sized plot of land, but all the sunny, useable space is at the front and was being used as a car park with a turning circle around a large fountain, while behind the house mature woodland cast most of the garden in deep shade. Emily was commissioned to redesign the garden to make the most of the sunniest aspect and to provide the setting for a new extension. “We decided to transform the front into a really beautiful arrival experience,” says Emily. “So that’s where a lot of the garden is now focused, while we’ve made a green and white garden to the rear to keep the woodland characteristics. The parking is now separated from the house by hornbeam hedges and we put in the parterre with evergreen structures for year-round interest. When you sit in the glass extension you are in the garden; you can open the doors and be part of it and enjoy the fragrance.”

The mulberry trees are a key part of the design. “I wanted to change the trajectory when you come in and create a f low towards the front door,” explains Emily. “The four mulberries have been repurposed from an RHS Chelsea Flower Show garden. What I love about them is that they have been roof-trained, but because they are domed they feel less staged and more natural. They are pruned three times a year, firstly at the end of May, then the end of June and finally in October. They were thought to be to be Morus nigra but, as they have never fruited, we now know they are Morus alba. Nevertheless, they’ve really worked out.” Steps lead down through trees from the lawn and wildflower banks to the front of the house with its glass extension. Wisteria screens provide an element of privacy without cutting the room off from the garden. Emily worked with interior designers Johnson Naylor to ensure that the interior and exterior spaces were in total harmony. The concrete bench in front of the loungers continues in a straight line through the glass wall and then curves round the fireplace. Growing conditions in the shade of the mature trees are far from easy, but Lonicera ligustrina var. yunnanensis forms a hummocky backdrop to the green-tiled lap pool. Blocks of Miscanthus sinensus ‘Starlight’ on the terrace have proved to be shade-tolerant.

It is very much a year-round garden. The first peak is in May with irises, nepetas, alchemillas and the first of the lavender, followed later by grasses, purple sage and Russian sage, while in winter there’s plenty of structure with grasses and evergreens. “It’s a very simple colour palette, which adds to the drama,” says Emily. “We cloud prune all the rosemary. The idea is that we have domes of rosemary with spires of iris, followed by Russian sage, rising through them, as well as the lateral plants that include the nepetas, hardy geraniums and alchemillas.” The tightly trimmed rosemary is an important element of the parterre. Chris Humphrey, the gardener, prunes it at the end of May so that it f lowers in June and July and then, when it’s nearly finished f lowering, it gets a hard prune to retain the shape. There’s a further f lush of f lowers coming into autumn.

Three Wisteria sinensis are trained on wired, metal frames in front of the glazed room. Emily worked with a structural engineer to create the shadow pattern. The climbers need careful management to create a balance between abundant f lowering and ensuring that the plants look good throughout the year. They are seen from both indoors and outdoors so there’s no hiding place for straggly or dead growth. Similar structures, planted with fig and clematis, are used to separate the rose courtyard at the other end of the house from the front garden.

To one side of the parterre, grassed steps lead up through a line of trees to a large, oval lawn encircled by banks of wildf lowers. A second house had previously stood there, and for the moment this area is a simple, mown, open space where the family can entertain or relax in the sun.

Beyond the glazed room, a wide terrace of beige limestone wraps around the house, leading to the woodland garden with its green-tiled lap pool, edged on two sides by drystone walling. Lonicera ligustrina var. yunnanensis nudges up against the planting along the top of the wall. The plants, including Agapanthus, Solomon’s seal (Polygonatum x hybridum) and Darmera peltata, have been chosen for their shade tolerance and resistance to intruding deer, while the Lonicera forms an effective barrier as the deer appear to be reluctant to walk through it. Between the house and the pool, blocks of Miscanthus sinensis ‘Starlight’ punctuate the terrace and create spaces for entertaining.

Ref lecting on the changes since her first visit, Emily says that “the brief was to bring some formality, charm and personality to the garden and update it without it being achingly contemporary. The word I think of is ‘chic’.” 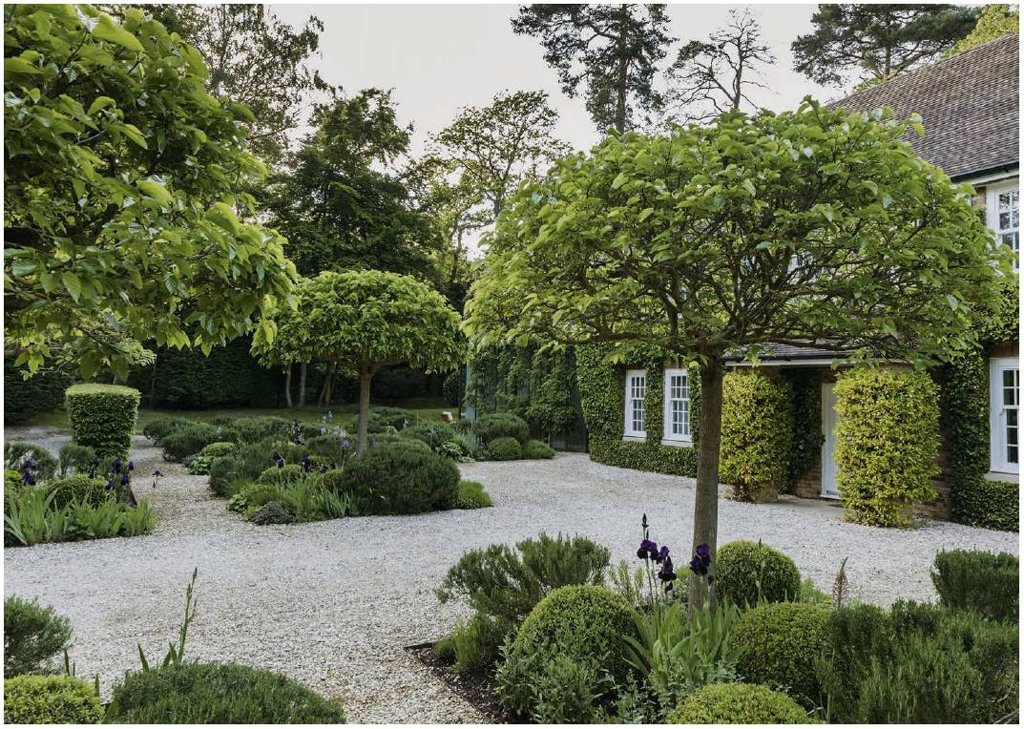 The evergreen parterre at the front of the house features four umbrella-trained white mulberries beneath which Iris ‘Jane Phillips’ and I. ‘Superstition’ add a touch of subtle, seasonal colour. USEFUL INFORMATION Find out more about Emily’s work at erlamstudio.com

What Private garden on the Wentworth Estate.

Climate Warm summers but a frost pocket in winter.