FOREGROUND / PARKS
STEEL AND SAND
A NEW NATIONAL PARK RISES FROM THE ACID PONDS OF THE PAST.
BY JEFF LINK To stand on the boardwalk and look east across the Burns Waterway at the Portage Lakefront and Riverwalk is to exist at the edge of two worlds. On one side is U.S. Steel’s Midwest Plant, a hulking, battleship gray industrial complex whose smokestacks breathe with the life of a different era. On the other side are soaring 50-foot-high sand dunes knit together with tufts of marram grass, rib-barked cottonwoods, and scraggly jack pines. This is a place that reminds you, in no uncertain terms, that life has choices.

Gregg Calpino is a landscape architect and principal and studio leader at SmithGroup, the multidisciplinary firm. JJR, now part of Smith-Group, completed the 57-acre park as part of a $9.7 million, 1,461-acre brownfield rehabilitation and infrastructure redevelopment project for the City of Portage, Indiana. Calpino says that each time he visits the park, which opened in October 2008, he’s approached by awestruck visitors. “A lot of them tell me how the park has impacted their lives. They’re out there from some traumatic life event—cancer, divorce. They go out there to find themselves, and they tell you the site was the whole impetus. I don’t think we ever imagined it would be that powerful for people.”

The Portage Lakefront and Riverwalk beach is one of eight dotting the 15-mile-long shoreline of a 15,000-acre expanse of rolling dunes, marshes, bogs, and groves of oak savanna, recently designated as the Indiana Dunes National Park, the newest and 61st national park. Upgraded from its former status as Indiana Dunes National Lakeshore, the park is home to more than 1,100 native plants, 350 bird species, and 50 miles of walking and cycling trails, according to the park website; it ranks in the top 10 in biodiversity of the more than 400 places overseen by the National Park Service, ahead of Yellowstone National Park, which is nearly 150 times its size. But it is hardly pristine, existing in a fragmented jigsaw of property lines and jurisdictional boundaries that cut across beachfront properties, rail corridors, rights-of-way, interstate highways, and steel mills. The park’s superintendent, Paul Labovitz, who describes himself as a “water resource guy,” came to the park from the Mississippi National River and Recreation Area in Minnesota on a temporary assignment but became enamored with the region and accepted a permanent position. An outspoken critic of state enforcement of environmental regulations, he says the staggering imprint of human influence—including beach homes on Lake Michigan, ports, and steel mills—presents one of the park’s most vexing challenges.

“How does this place continue to be one of the most ecologically diverse places in the nation, given the fact that we have one of the largest steel mills in the country, the largest port in the Great Lakes is in the middle of the park, and you can stand on any beach and see the city of Chicago?” he asks.

It’s a question that, in spirit, goes back more than a century. In the 1920s and 1930s, as dunes were being leveled and carted off by industrialists building steel mills and harbors, conservation groups such as the Prairie Club, founded by the Chicago landscape architect Jens Jensen, were leading efforts to preserve the region’s delicate ecosystem. Their cause was taken up by Illinois Senator Paul Douglas and the preservationist Dorothy Buell, who founded Save the Dunes, an advocacy organization still active in the region. Together, they helped push forward legislation designating the dunes a national lakeshore—and apportioning funds for the construction of the Port of Indiana, a bargain between ecologic and economic interests whose trade-offs are still being felt today. “There was public backlash and the feeling the feds would take away private property,” explains Lynn Mc-Clure, a senior regional director at the National Parks Conservation Association. “It was a way to ensure there would be industry and job growth at the same time the national park was created when the public viewed it as undesirable.”

Now public sentiment toward industry is quite a bit different. A federal lawsuit filed by the University of Chicago’s Abrams Environmental Law Clinic on behalf of the Surfrider Foundation alleges U.S. Steel repeatedly violated the Clean Water Act by discharging pollutants into Lake Michigan. In an April 2017 incident, public records show that nearly 298 pounds of hexavalent chromium spilled from U.S. Steel’s Midwest Plant into the Burns Waterway, a small canal that drains into Lake Michigan at the eastern edge of the Portage Lakefront and Riverwalk.

The complaint led to legal action by the U.S. Environmental Protection Agency and the Indiana Department of Environmental Management and, ultimately, a consent decree requiring U.S. Steel to repair its treatment plant pipes and containment trench, pay more than $600,000 as a civil penalty, and reimburse the EPA and the National Park Service for response costs incurred as a result of the spill. Following the incident, the park closed four beaches at the Indiana Dunes National Lakeshore, operators in the nearby town of Ogden Dunes temporarily shut off their water intake, and the City of Chicago conducted emergency testing of its water supply.

“Frankly, we still don’t know how much chromium was released in 2017,” Labovitz says. “We don’t know what it was, how much of it there was, and we can’t get answers to those questions. Luckily, all these didn’t happen during prime beach season or there’s a chance people could have gotten hurt.” 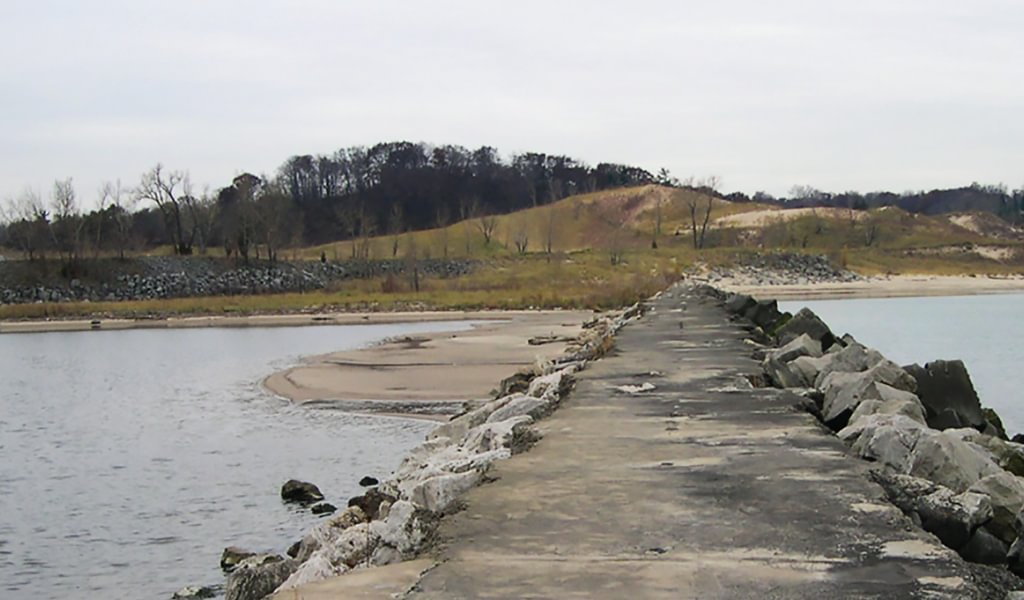 The U.S. Army Corps of Engineers-built breakwater languished before restoration. 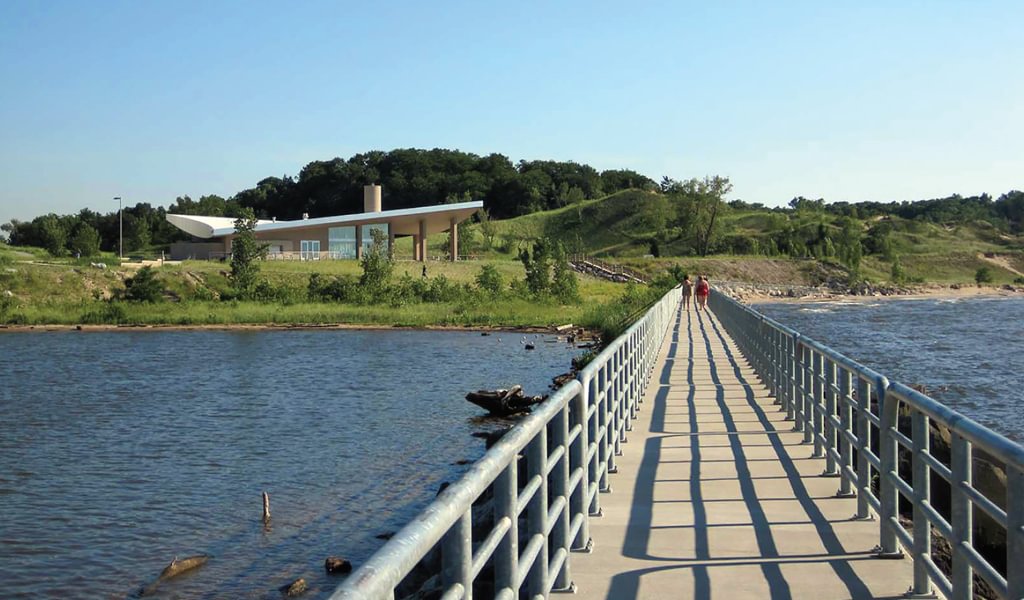 As incidents such as this have stained the reputation of legacy industries, he explains, aging coal-fired generators like those at the Bailly Generating Station in Burns Harbor have been decommissioned, drawing interest from the park service for conversion to public beaches. (The plant sits on 100 acres near the Port of Indiana, which bisects the park.)

Labovitz says the new national park designation has drawn increased interest in inland and shoreline protection and restoration as an engine of regional economic development. Indiana Dunes Tourism reported, moreover, that visitation added $476.4 million to Porter County’s economy last year alone. “The steel industry has consolidated and grown smaller. They’re not growing like they used to, and there’s more of a movement to preserve open space and grab more open space,” says Joel Baldin, ASLA, the managing principal of the Chicago office of Hitchcock Design Group.

But if the transformation of Lake Michigan’s southern shoreline to more pristine conditions has gained increasing public and private sector support in recent years, it’s part of a steady evolution that began decades ago.

Calpino says the credit rests largely with the Marquette Plan, developed by Indiana Representative Pete Visclosky, who also created the legislation designating Indiana Dunes National Park, which was approved as part of a $1.4 billion federal spending package for security at the U.S.–Mexico border. First proposed as the Marquette Greenway Plan on the floor of the U.S. Congress in 1985, the plan had three key tenets: First, 75 percent of the lakeshore, from the Illinois state line to the eastern boundary of Portage, should be open and accessible for free public use. Second, there should be a minimum setback of at least 200 feet for any lakefront development. Finally, it called for the creation of the Marquette Greenway Trail, a continuous 50-mile biking and walking trail from Chicago to New Buffalo, Michigan, whose gaps are steadily being filled.

A bluff climb leads to a scenic overlook on Lake Michigan. (SMITHGROUP)

If Visclosky was instrumental in bringing everyone to the table to get behind the plan, the Northwest Indiana Regional Development Authority (RDA) provided critical funding. The plan was taken up by JJR, which was hired as a consultant to develop a lakeshore reinvestment and land use framework for five industrial towns hugging a 21-mile segment of Lake Michigan’s southern shoreline—East Chicago, Gary, Whiting, Hammond, and Portage.

The Northside Master Plan goes well beyond this, situating the Portage Lakefront and Riverwalk within a development corridor that includes connections to the city’s marina, a mixed-use neighborhood center at the Ogden Dunes stop on the South Shore Line (a commuter rail planned for expansion), an office campus, and the Burns Parkway, a curving boulevard linking the park to major highways, retail stores and hotels, and rail and bus connections. “Portage did it as a holistic project. That’s kind of why it’s viewed as the poster child of the Marquette Plan. Yes, it’s a park, but it was something more: transformation of the community and region that they couldn’t have done on their own without somebody like the RDA,” Calpino says.

On a visit to the park in July, I saw in finer detail what Calpino had described by phone: “a great, recovering, sensitive dune habitat.” Against a backdrop of gently rolling dunes, pleasure boats floated lazily down Burns Waterway; beachgoers waded into the blue-green chop of Lake Michigan; a woman with a head scarf strolled the breakwater with a fishing pole swinging lightly above her shoulders. It was quiet but well-used, a place of refuge and recreation for those seeking it.

This year, with an unusually wet spring and Lake Michigan close to its historic high-water mark, the boardwalk was partially inundated with water. Labovitz says the flooding speaks to the need for engineered structures to be sufficiently elevated. “The Monday morning quarterbacking I get to do on the design is that they may have underestimated the high-water level. The lesson is to build a really generous margin of error when you’re looking at water-level change, especially in the climate change situation,” Labovitz says.

“RESTORATION IS AN INTERESTING WORD. THIS WHOLE PLACE IS A STORY OF SUCCESSION.”
—PAUL LABOVITZ, INDIANA DUNES NATIONAL PARK SUPERINTENDENT

He is also concerned about the shrinking size of the beach, which he says loses an estimated 200,000 cubic feet of sand per year and will require replenishing, an expensive and labor-intensive process. Tracing his finger along a map past Gary, Michigan City, and the Port of Indiana, he says the Portage Lakefront and Riverwalk echoes the story of many sand-starved beaches along the lakefront. As the littoral drift of sand moves east to west along the shoreline, it gathers in mounds to the east of ports, marinas, breakwaters, and jetties, leaving west-side beaches scalloped and stripped of sand.

Achieving Labovitz’s long-term vision of the Indiana Dunes National Park shoreline “as a somewhat natural vegetated dune that is more resilient to the actions of the lake than hardened built structures” may call on landscape architects to widen their lens beyond the site. “Restoration is an interesting word,” Labovitz says. “This whole place is a story of succession. If you play that out, [the dunes] are all moving in a direction. What we seem to be doing here is stalling their progress and restarting the clock.”

JEFF LINK IS A CHICAGO-BASED FREELANCE JOURNALIST AND GRADUATE OF THE IOWA WRITERS’ WORKSHOP. HIS WORK HAS APPEARED IN FAST COMPANY, ARCHITECT, ARCHITECTURAL RECORD, AND OTHER PUBLICATIONS. ■