1 Climax no. 2, fondly known to crews as “Buster,” begins its long haul with a string of timber down from the logging camp on the High Line to the mill at Colfax. The scene is part of the Roseville Roundhouse Model RR Club’s HO scale layout in Roseville, Calif.

The year 1977 was notable for more than just the death of Elvis Presley, the first flight of the space shuttle Enterprise, and the theatrical release of Star Wars. In that historically notable year, one more significant event occurred: the founding of the Roseville Roundhouse Model RR Club in Roseville, Calif. The five founding members first met in the projection room of the Jones Exhibition Hall at the county fairgrounds in Roseville, and construction on the first layout began soon thereafter.

After several relocations within the city, the club returned to the fairgrounds in 2005. Two permanent N scale layouts and a modular HO scale layout were soon constructed. In July 2008, the HO modular layout was removed, and construction began on a permanent HO scale layout. By the end of that year, the benchwork, track, and wiring were all completed, and trains were running.

One of the N scale layouts was eventually removed to provide more room for meetings and workshops. New cabinets and workbenches were installed, as were closed-circuit cameras and TV screens so the hidden storage tracks can be visible at all times. Monitors were also installed and linked to the two locomotives equipped with cab cameras.

The club’s HO scale home road, the freelanced Western Sierra Lines, is an older Class 1 that’s a “feeder” line to the Union Pacific, Southern Pacific, and Western Pacific (pre-merger). The towns and villages on the layout roughly follow the old Central Pacific/Southern Pacific route from Roseville up through the western slope of the Sierra Nevada to Truckee, which are represented by the two main yards.

The one geographical deviation is Lost Hills, which represents an oil and mining area in south-central California. The towns aren’t designed to accurately model the real locations, but are merely used for orientation and operations.

The club room is approximately 40 x 40 feet, with the overall design being a 17 x 30-foot reversed Z shape. The benchwork is an open-grid framework resting on 2 x 3 legs. There are no duckunders or lift gates.

The hidden tracks under the mountains can be accessed through pop-up holes in the benchwork and removable panels.

The roadbed is cork on medium density fiberboard (MDF) subroadbed. The track is code 83 flextrack with a minimum radius of 30" and a maximum grade of 2 percent on the mains. The turnouts are no. 6 and no. 8 on the mains and no. 4 in both yard ladders. The double-tracked main lines are approximately 200 feet long each.

The layout also features a mountainous short line designed to highlight geared steam and small, short wheelbase diesel equipment. The timber camps and oil drilling areas are accessed by the short line, which connects to the main at Colfax. The minimum curve radius of this section is 24" and the maximum grade is 4 percent.

The layout was originally designed for continuous running on the main lines, with some thought to allowing industry switching operations in the future. The plan has since been modified by adding more sidings and industries to accommodate more operation.

The theme for the layout is a double-tracked main line winding its way through the foothills and mountains of northern California, with a southern connection to Lost Hills, 42 miles west of Bakersfield. We chose not to install huge mountains, but instead tried to represent the rugged, rocky nature of the Sierras (Truckee) and the rolling grassy foothills of Gold Country down to the Sacramento Valley (Roseville).

Just about every method of terrain building, from plaster cloth over car-board lattice forms to extruded-foam insulation board sculpting, was used in creating the land forms and scenery. Commercial products and locally obtained items were used for landscaping. We even sifted dirt from right outside the clubhouse.

A general plan for the overall look was drawn up along with the track plan, though members were encouraged to use their imaginations when working on a particular scene. As work on the layout progressed and members became more confident with their skills, some of the earlier structures were replaced with superdetailed craftsman kits. Over time, much of the landscaping has also been upgraded.

The club runs both steam and diesel locomotives and isn’t tied to any particular era. On any given day you might see an old-time Shay dragging timber down from the high line, a big Electro-Motive Division SD70 hauling double stacks, and a high-speed passenger liner running the main line, all at the same time. 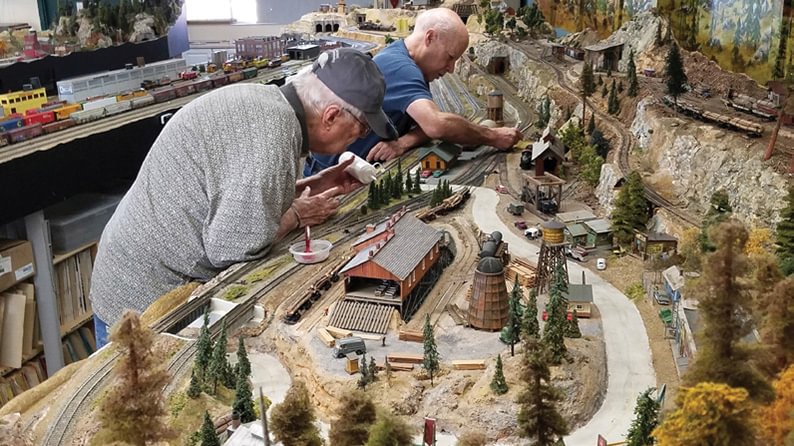 2 Club president Dick Strahl (front) and member John Bowles work side by side to perform routine maintenance on the HO scale layout. All members are encouraged to participate in layout upkeep, from ballasting to track cleaning.

3 Eldorado & Gold River 4-4-0 no. 7 gets ready to pick up a mixed load from the Colfax depot. The local peddler is a small outfit that runs between the local communities on the western slope of the Sierras. 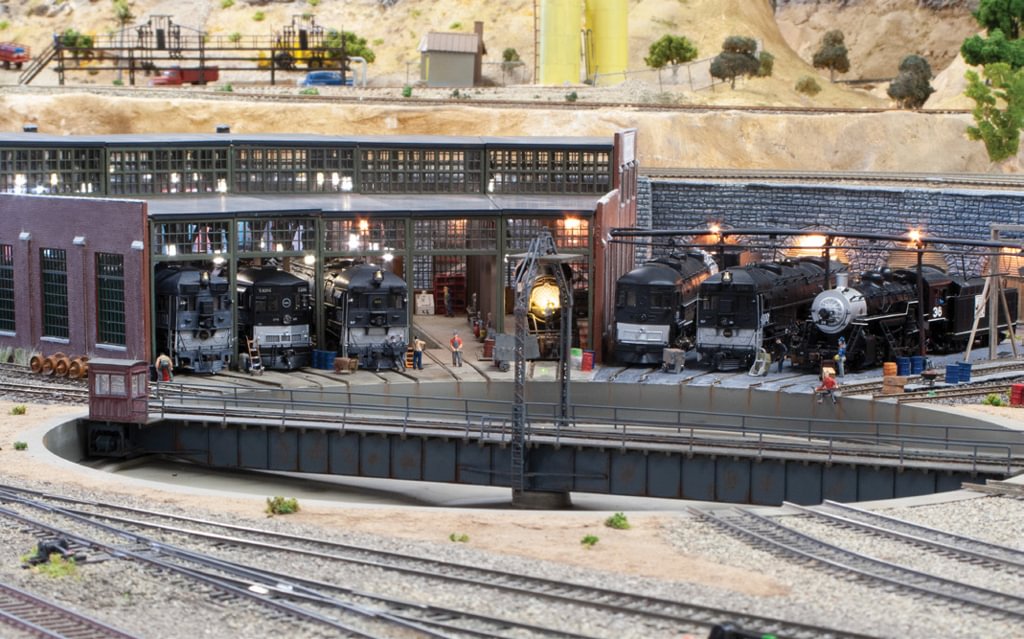 Members are free to run equipment of their own, though they’re encouraged to follow the National Model Railroad Association (NMRA) standards the club requires of its own equipment.

The club maintains a fleet of locomotives and rolling stock club members can use. It’s gradually upgrading much of its older equipment. For instance, all the club’s new locomotives must be equipped with Digital Command Control (DCC) sound decoders.

The layout is controlled by a Model Rectifier Corp. Prodigy Wireless DCC system with one command station and six boosters, for a total of seven power districts. In addition, the short line can be operated on DC or DCC. This selectable control gives club members the ability to run older equipment that hasn’t been converted while still providing switching opportunities during DCC operating sessions.

Operating sessions are conducted on a monthly basis, with the exception of the holiday season. Only the best club equipment that has been thoroughly inspected is used for operating sessions to ensure smooth running. 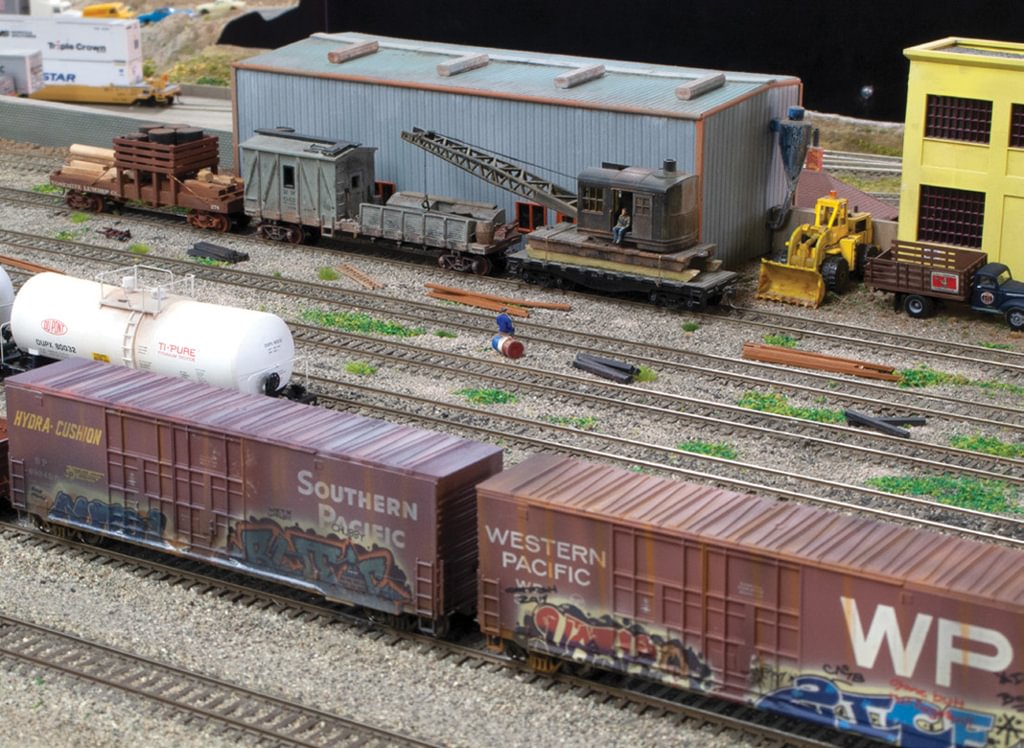 6 It’s quitting time at Truckee Yard, so these workers have time to sit and catch up on the local high school sports.

With two functioning yards and four hidden staging tracks, the sessions can be quite challenging. There are several “matching” industries on the layout that serve each other, such as the sawmill and the lumber yard, the barrel manufacturer and the rum factory, and the oil fields and the refinery.

With the addition of the switching layout, members can practice and hone their skills.

As of this writing, the club has 33 members and is actively recruiting new ones. The clubhouse is available to members 24/7 all year, so even though official meetings are on Tuesdays and Saturdays, you’re likely to find members running trains any day of the week.

The clubhouse is less than a mile from the Union Pacific yard, and members often take their lunch break at a restaurant where we can watch the big diesels moving in and out of the yard.

The club is co-host/sponsor to one of the biggest regional train events of the year, the International Railfair. The fair is held in November at the county fairgrounds and draws thousands from the area. This year (2019) marks the 43rd year of the event. 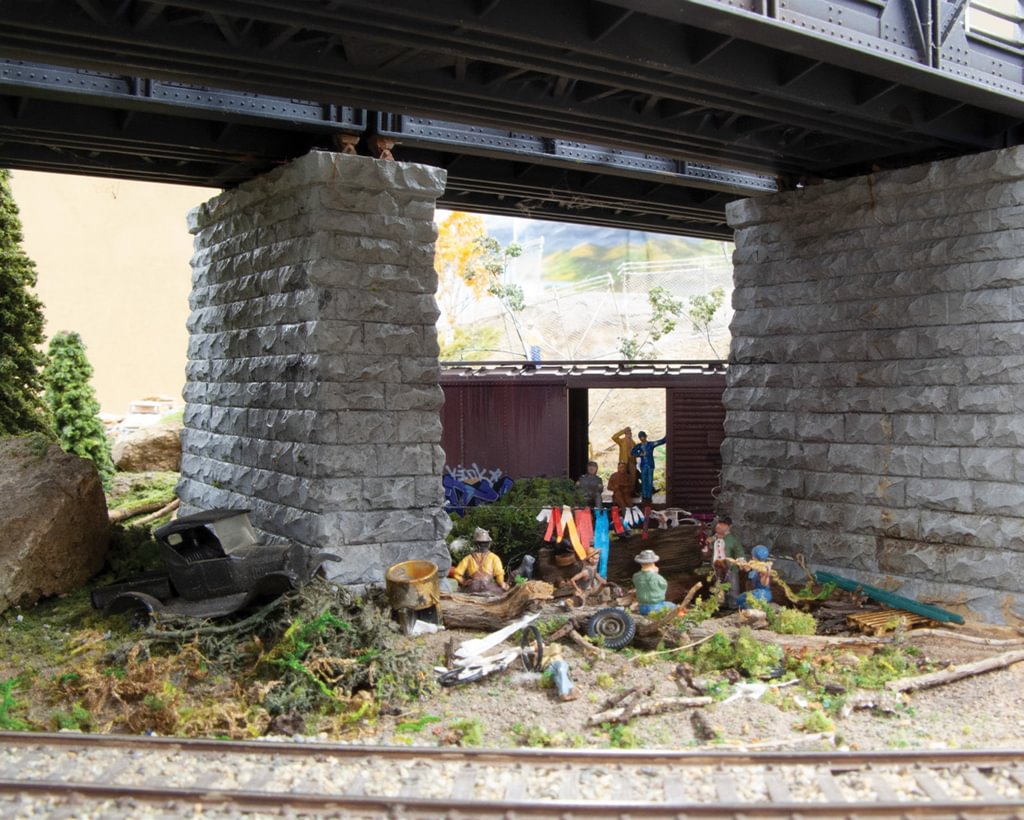 7 A few “free spirits” enjoy each other’s company at an improvised campsite. The local officials are somewhat lenient towards the travelers. In a few days, the folks will move on and go their separate ways.

Like many clubs today, our status at our present location is somewhat tenuous. Another local train club just disbanded because they lost the lease to their clubhouse. The county and local businesses are spending huge amounts of money to upgrade and renovate the fairgrounds, and the building that housed the European Model Railroaders modular layout during the International Railfair has been torn down. We’ve only been able to obtain a one-year lease on our building, instead of the three-year one we requested.

The club has assigned a committee to find a new location that would suit the club’s needs and be available for long-term occupancy. We may even buy a building. If we do have to move, we’re fortunate to have quite a few club members skilled in layout design and construction, so we hope it wouldn’t take long to get up and running again. Several members are already making a “wish list” of features for a new layout, including a narrow gauge line and a harbor location.

It’s safe to say that the club is looking forward to a bright future with the possibility of a new location and new members who share our love of model railroading.

The layout at a glance

Backdrop: painted on the wall 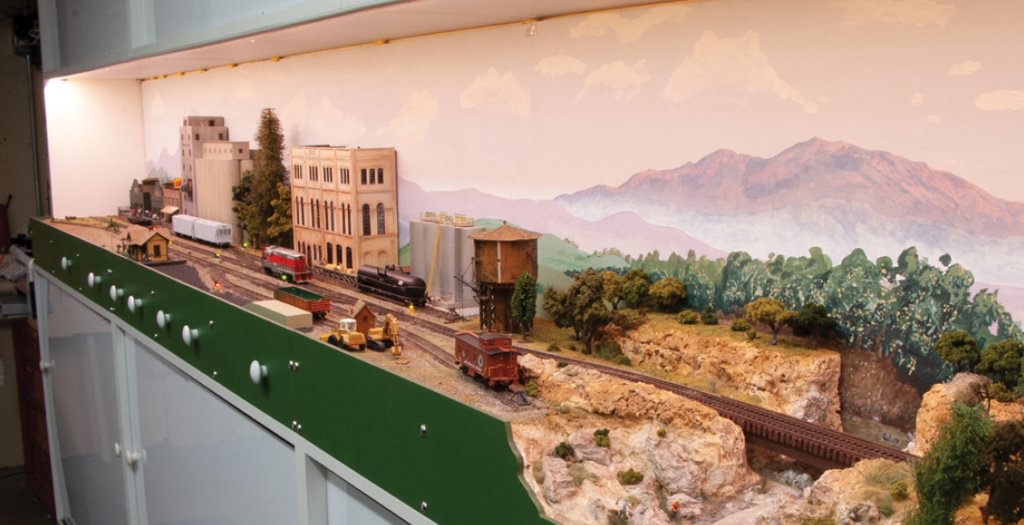 5 The club’s HO scale switching layout is a popular attraction for visitors and members alike.

One of the newest additions to the club is the HO scale switching layout. This shelf layout, which occupies a countertop to the side of the main layout, consists of three modules and measures 18" x 12'-0".

The track plan is a modified version of Robert Pethoud’s Fall Creek Branch. [See “How to operate a small switching layout” in the March 2016 MR. – Ed.] Some tracks have been shifted to enable standard track connection points at the end of each module, which allows us to rearrange the modules as well as add new ones for future expansion.

The modules are connected electrically with Anderson Power Pole connectors and 1⁄4" mono phone plug connectors on each end, providing separate power for the track and a 12-volt accessory bus for signals and lighting. Future upgrades will change the mono plug to stereo to accommodate an additional 5-volt bus for Arduino automations.

The layout can be operated from three different sources: a direct-current power pack, a computer running Java Model Railroad Interface (JMRI), or DCC from the main HO layout’s command station. Input power is selected via a push-button control panel using an Arduino Nano to control a bank of relays.

This layout is a favorite with kids and adults alike. – Bill Dillon 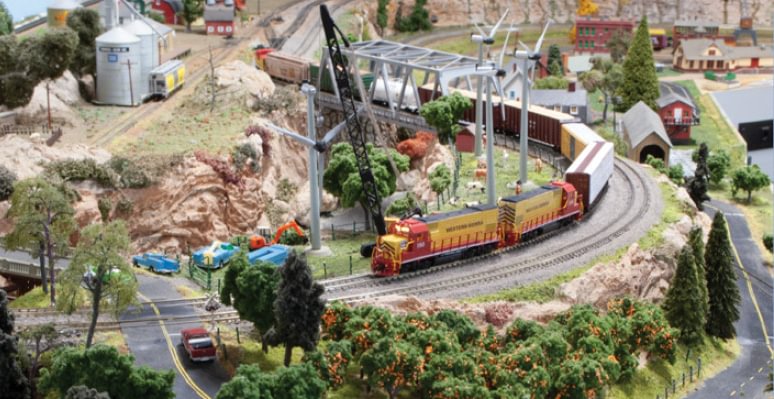 A pair of Western Sierra GP15-1’s haul a freight past a wind farm as a crew replaces one of the massive rotor assemblies on the club’s N scale layout.

The N scale layout is an elongated horseshoe design with a double-track mainline run of approximately 136 feet. The layout is highly detailed, with scenery ranging from rolling countryside to a busy city and seaport (we’ve even had an N scale U.S. Navy destroyer tied up at the docks at Port Reeves). The layout can be operated by either DC or DCC. – Ken Kilby

The Roseville Roundhouse Model Railroad Club is open to the public on Tuesdays and Saturdays from 9 a.m. to noon year-round. If you’d like to visit on another day, please contact us and we’ll try to make arrangements for a member to show you our club. For more information, go to rrmrc.railfan.net. We’d love to have you. ■