A CURVING CONCRETE ROOF PROTECTS THE 250 SQ M RESIDENCE, WHICH IS PART OF THE OCHOALCUBO ARCHITECTURAL PROJECT IN OCHOQUEBRADAS, A THREE-HOUR DRIVE NORTH OF SANTIAGO

Chile’s Pacific coastline offers up a rich seam of interest for architecture buffs. For example, just a few kilometres south of the town of Los Vilos, set among the rocky cliffs and jagged promontories that reach out into the ferocious South Pacific surf, there’s a world of wild experimentation. Here, the modernist beach house is being taken to the typological outer limits, making the most of this dramatic landscape and the splendid, edge-of-the-world isolation.

Casa Nishizawa is the latest structure to be perched on this spectacular terrain. The house was designed by the Japanese architect Ryue Nishizawa, one half of Pritzker Prize-winning outfit Sanaa, which he founded with Kazuyo Sejima in 1995. It was commissioned by Philippe Godoy, of Chilean developer Ochoalcubo, for a grand scheme to indulge architects’ more extreme ideas and create liveable art that someone will want to buy.

Godoy and his father Eduardo, who run Ochoalcubo together, are nothing if not ambitious. Casa Nishizawa is to be one of 16 architect-designed houses on this site, the current phase of a wider project that encompasses 64 properties. Last year saw the completion of a striking concrete composition by Alejandro Aravena’s firm Elemental (see W*238), and the new house is no less structurally and aesthetically inventive.

Ochoalcubo’s overarching aim is to provide a blank canvas in an unbeatable location, with the hope that the architects they select rise to the challenge and deliver a masterpiece. The Godoys have an excellent eye. ‘We have consistently chosen renowned architects alongside promising young ones,’ says Philippe. ‘When we selected Smiljan Radić [to work on an earlier phase], he was just 32 and had barely built anything. Now he’s Chile’s best architect.’

The current plan is to realise the visions of eight Japanese architects and eight Chilean ones. Philippe approached Toyo Ito for help in making the selection. ‘Together with Nishizawa, we have Sejima, Kengo Kuma, Sou Fujimoto, Junya Ishigami, Atelier Bow-Wow, Onishimaki + Hyakudayuki, and Akihisa Hirata,’ says Philippe. Nishizawa’s offering was designed to be both immersed in the landscape and floating above it, occupying a long, thin site that reaches out over the ocean on a slender cape. Using the existing landscape, the house steps down the hillside, its ribbon-like concrete roof curving to touch the earth. Walls are glazed to create a series of arched vistas onto the surrounding coastline. A meticulously finished kitchen is at the heart of the house, with public spaces set ‘below’ it, facing the sea. Back up the slope are more private zones, including a bedroom and sunken bath area. 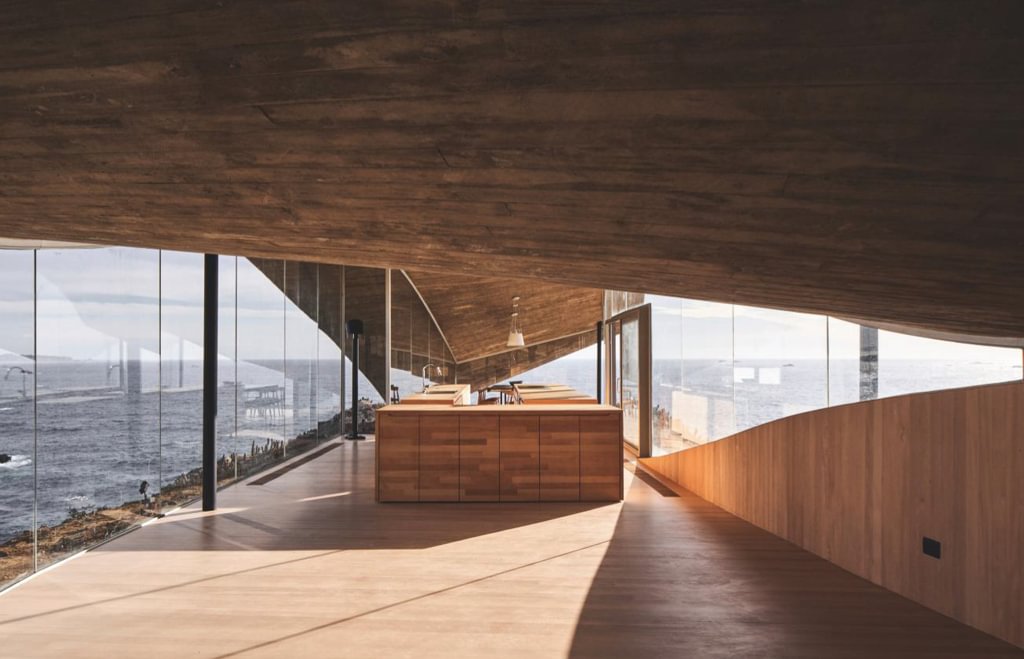 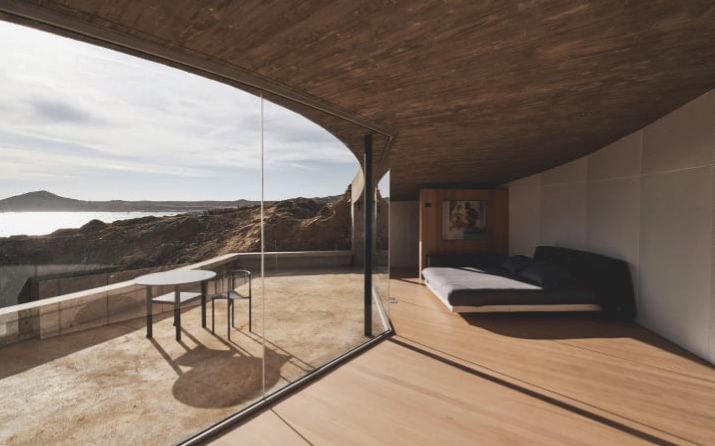 REACHED VIA AN UNDERGROUND PASSAGE, THE MASTER BEDROOM BOASTS A PRIVATE SHELTERED TERRACE

‘The house is very true to the original design,’ says Philippe. ‘Even the roof is exactly the same as proposed.’ The complex concrete form required some careful calculations and was set out as a grid on the ground, with the undulating heights replicated in scaffolding before the concrete could be poured. The roofscape doubles as a terrace, although the vertiginous heights are not for the faint-hearted. The 250 sq m of space it envelopes is mostly open-plan. Viewed from a distance, with the setting sun in the background, the glazing appears to vanish, the floors disappear into the terrain and all that remains is the concrete roof, rippling above the cliffs. It’s an impressive effect, part of what the architect calls the ‘diversity of openness’, attained by engaging directly with the landscape.

‘We aim to show that other types of real estate are possible. We are an office with some very crazy ideas’

For Philippe and his team, Casa Nishizawa represents just one of many journeys the company is currently undertaking. ‘Working with Japanese architects has been a true discovery for us. Their perfectionism, together with their humility – it’s difficult to describe how incredible our relationship has been. We are now working as partners and friends,’ he explains.

Other Ochoalcubo houses are currently in development at Los Vilos. ‘Max Núñez’s house is under construction and we are starting two more at the beginning of next year,’ says Philippe. ‘We aim to show that other types of real estate development are possible and, as well as these 16 houses, we are also building a three-storey, three-unit apartment building in Santiago. Our idea is to densify the city and we want to build more of these projects using prefabricated components. We are an office with some very crazy ideas.’